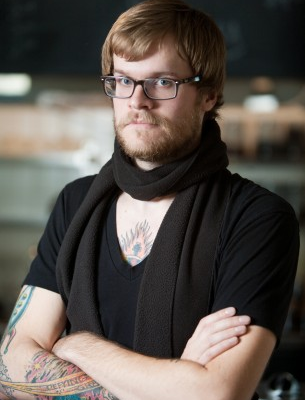 “Hipster sommeliers.” “Dim somms.” Oh no! Arrogant youngsters are forcing helpless diners to consume weird wines! Save us from this horrible trend! This is one of the top memes for ancient wine writers this summer.

Let me name some names here: Wine Spectator‘s James Laube. Steve Heimoff, who once wrote for Wine Enthusiast and now sells Kendall-Jackson. Charlie Olken from the Connoisseurs’ Guide to California Wine. I’m calling you on your bullshit.

I’m naming names because I’m tired of the anonymous straw men in the “dim somm” articles.

Laube can pen a screed against In Pursuit of Balance, and if he wants to say Raj Parr has no taste, fine. People disagree. But these old men always go too far and attack this supposed nationwide trend of hipster somms and their consumer-unfriendly wine lists. For God’s sake, Heimoff compared sommeliers to ISIS.

I got one (1) incidence of a sommelier pouring a wine that the commenter didn’t like AND refusing to take it back. One. From thousands of readers. I got a few other incidents of sommeliers being rude or ignorant. This happens. Some servers are bad too; so are some chefs. But just because the somm is rude doesn’t mean he’s making you drink swill.

Heimoff blogged about this issue last month and the comments quickly deteriorated into some people complaining about some restaurants that don’t carry California sparkling wine. I like California sparkling wine as much as anybody. And I’m a huge proponent of restaurants carrying local wines, especially if they brag about local food sources. But if a restaurant doesn’t have one type of local wine, that hardly makes them dictatorial hipsters. It’s a straw man.

I’m a diner. I don’t have the right to tell a restaurant they must carry some specific wine, or they can’t carry some other wine. My right is to eat somewhere else.Consider the restaurants where these old guy writers (and they are ALL guys) don’t like the wine lists. Charlie Olken wrote this comment about Commonwealth, a restaurant in my neighborhood, on Heimoff’s blog: “Commonwealth restaurant, an otherwise interesting place to eat, has just such a list of unknowns. When asked about it, the somm responded, ‘What the customers want is not important.'”

I ate at Commonwealth last week, and its list is obscure, especially by the glass. And it’s not perfect. I didn’t consider the California Riesling/Pinot Noir white blend as delicious as it was interesting. The Austrian Gelber Muskateller was too herbaceous for me. But I didn’t go there for a burger and fries. My favorite dish was “sea urchin, trout roe, potato, little gem lettuce, sea bean, lime cream, pickled wasabi.” We also really liked “squid and pork belly, soft cooked egg, hay smoked potato, fine herbs, yuzu aioli.”

You know what I first drank, by the glass? Pouilly-Fuissé. Then I had a Canary Islands red. Nobody offered me a Rodney Strong Chardonnay or Robert Mondavi Cabernet. But nobody forced me to drink swill either. I told Commonwealth’s beverage director about Olken’s comment and she hit me on the arm, she was so furious. She went into the office and searched it on the Internet. Then she came back, equally furious. She says she would never say such a thing, and I believe her. Just don’t hit me again.

This is one problem with the old guys’ complaints. It’s exaggeration. It’s bullshit. But even then, it’s not the main problem.

This is the main problem with this bullshit about whether or not polemical sommeliers are telling diners what to drink. Whether these somms are unicorns (non-existent) or platypuses (exceedingly rare), they don’t work at House of Prime Rib. They’re not getting in the way of a steak-loving diner who’s looking for a big-ass Napa Cab. I’ve never yet heard of a complaint about too many weird wines at a classic French-style bistro.

If you are the kind of diner who enjoys restaurants that serve squid and pork belly with hay smoked potato and yuzu aioli, it’s not unreasonable for that restaurant’s wine director to assume you might want to try some wine you haven’t seen before. If you don’t want a creative wine, why are you eating creative food? Go to a steakhouse. Or that solid place downtown that’s been good for 20 years. Or bring your own bottle of wine and pay corkage; I’ve done that at Commonwealth. Geez, just be happy.

Or not. Frank Bruni did a brilliant piece for the New York Times a few years ago in which he spent a week as a server. A fellow server told him, “Some people are interested in having the experience of being disappointed.” That does sound like someone who goes to a trendy restaurant and complains that he can’t get Cakebread Chardonnay.

What should matter is if the wines are good. That’s a subjective opinion, but so is food. With food, it’s one we make every day, and we don’t over-reach it into a political issue. I go to new restaurants sometimes and think the noodles are too bland or the fish is overcooked. I don’t then write a column saying, “These hipster kids today, all across America, they can’t cook a fish.” I simply go to a better restaurant. Why is wine any different?

Thirty years ago, top restaurants had Bordeaux and Burgundy and Champagne and not much else because not much else in the wine world was really good. Now there are great wines from Turkey and Slovenia and Uruguay. Some people don’t want to try new things, and that’s fine; steakhouses are still more popular than pho shops. But old men can’t tell the rest of us not to eat pho.

I’m going to frame this argument as simply as I can:If you think a restaurant’s wine list is too weird for you, you are too old to eat there. Eat somewhere else and stop your bullshit.