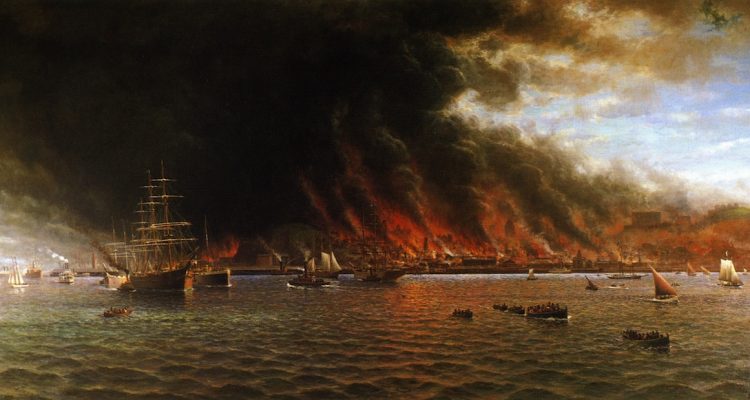 Wine in the aftermath of the “Great Quake”

After the shaking had ended, a fire erupted that literally sent half of San Francisco up in smoke. 28,000 buildings were destroyed, 3,000 lives lost, 500 looters shot and two-third of the city’s population of 410,000 left homeless before the fire was extinguished four days later. Jack London, who was an eyewitness to the disaster wrote, “San Francisco is gone…nothing remains of it but memories…” Behind the disaster, though, there seems to have been a bit of a silver cloud for wine connoisseurs.

According to an August 25, 1906 article in the Spokane Press, when the fire reached “the vaults of the California Wine Association, the storehouse of the wine product of the entire state [of California], it ate away the cooperage of the great 80,000 gallon casks of sherry…stored in the upper part of the building.” The burnt and weakened casks gave way and the sherry “fell through and submerged [a] half million bottles of wine [and champagne] lying in the recesses of the cellar.”   The heat from the fire boiled the sherry. The boiling continued “For two days and nights.” Once the fire subsided and the “immense volume of wine had cooled, it was pumped out into the street”—a devastating economic loss.

It was then discovered that of the 500,000 bottles “which had been immersed for so long in the boiling sherry” about 50,000 had survived intact. Upon further investigation a “marvelous bouquet of the contents was discovered.” It was estimated at the time “the process by which the wine was perfected” cost over $1,000 per bottle. The 50,000 bottles, it was believed, were worth $1,000 each [at today’s value over a staggering $1.4 billion].  According to National Public Radio’s Renee Montagne, there would be more wine destroyed during the disaster when residents of the Telegraph Hill neighborhood “banded together…with barrels of wine that the Italians were fermenting in their basements [and] poured [it] on the fires that swept…up the hill…wine was even used to soak burlap sacks to cool down the roofs of houses.” The wine saved the neighborhood.

One additional outcome of the earthquakes aftermath was a number of court cases waged by the California Wine Association against insurance companies which sought to avoid paying claims because the disaster was caused by an earthquake—an exclusion in virtually every insurance policy. The Association asserted the fire damage to its warehouse and inventory was caused by firefighters or vandals and not by the earthquake. Ultimately the California Supreme Court ruled in the Association’s favor, forcing the payment of $268,446 in coverage [$7.5 million in current values]. The ruling set a major precedent in insurance exclusion law.

Numerous clergy in San Francisco insisted that the earthquake and subsequent fire was the wrath of God—divine retribution for San Francisco’s wicked alcoholic ways. Ironically, one building that survived the fire was the Hotaling Whiskey Warehouse. It was saved because firefighters feared it’s 1,700 plus barrels of spirits would further add to the firestorm that Jack London described as “heated air rising [that] made an enormous suck.”   The incident inspired local poet Charles Kellogg Field to write the following verse:

If, as they say, God spanked the town
For being over Frisky
Why did He burn the Churches down
And save Hotaling’s Whiskey?