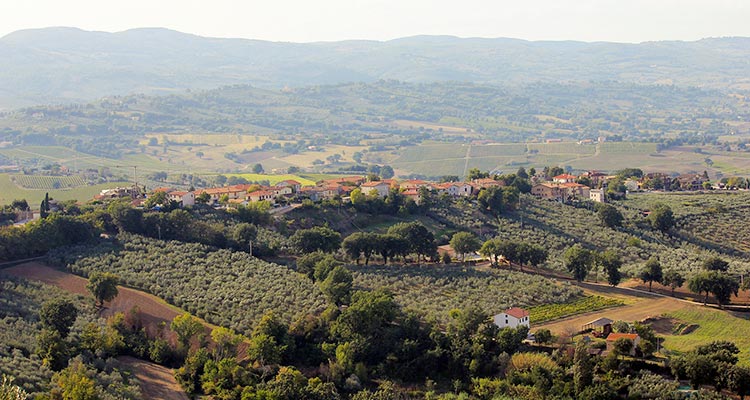 Loving Italian Wine (in the Time of Coronavirus)

Anyone who has followed my wine writing, even casually, will know that obscurity is my passion. The weirder, the better. I recently, for example, wrote a book about a winemaking area of Pennsylvania that thrived in the 1800s. And about a year ago, here on PP, I covered my favorite oddballs from Slow Wine USA.

It’s no surprise, then, that I’m particularly attracted to Italian wine. Because of a variety of socioeconomic factors, Italy features more high quality native grapes than pretty much anywhere else. As of this writing, the Italian National Registry of Grapes lists close to 600 official varieties, but some experts believe there are easily 1000 more yet to be discovered. Hugh Johnson’s Pocket Wine 2019 posits that 28% of the world’s wine grapes are Italian. (By contrast, 95% of French wine comes from just 40 varieties.)

Beyond the statistics, I love how, when in Italy, one can enjoy a lovely local wine, then drive just a few miles to find totally different local wines (and foods, of course) that are just as lovely. It’s even better when encountering the unfamiliar.

As such, I’m always on the lookout for the wild, the wacky, and the unique wines of Italian wine. Here are just a few noteworthy ones that I’ve tasted recently. Happy hunting!

Cantine Olivella Emblema Vesuvio Caprettone 2018
I can’t say that I had heard of Caprettone before coming across this wine, though I have tried Coda di Volpe, which some believe is the same grape (and others vehemently dispute). Regardless, this is a complex and beautiful wine. It’s mineral-driven — which isn’t surprising coming from the volcanic Vesuvius soils — with citrus, herbs, bitter almond and more. Lovely stuff, especially around $15. (media sample)

Madrevite Colli del Trasimeno Elve Grechetto 2018
Best known as the breezy, easygoing white of Umbria’s Montefalco and Orvieto, Grechetto is rarely taken too seriously. But wow… this wine shows that perhaps it should be. Savory, rich, lush and delicious! A great white for cooler days or bolder foods. (media sample)

Réva Langhe Bianco Grey 2018
A newcomer to the Piemonte scene (est. 2012), Réva was focused exclusively on reds when they accidentally discovered a plot of Sauvignon Gris, a clonal mutation of Sauv Blanc. The result is “Gray,” a blending of the mutation (70%) and its parent (30%). And while I’m not sure I would’ve picked it out as anything but an aggressively-flavored Sauvignon Blanc, it was certainly both tasty and fun to try. (media sample)

Bastianich Schioppettino Vini Orsone Colli Orientali del Friuli 2017
I don’t see Schioppettino often in the store, but when I do, I buy at least one bottle. It’s such a fun wine. Medium-bodied, with wonderfully tart fresh berries, and a telltale peppery note. This one is freakin’ delicious! ($21)

Gianni Doglia Ruché di Castagnole Monferrato 2017
Ruché is an incredibly unique grape; Ian D’Agata once wrote it is “impossible to confuse with any other variety,” though it’s assertive floral and spice aromatics do recall some similarities to Lacrima di Morro. And while this is a lovely Ruché, no doubt, with lots of complexity and character, I do struggle to pair Ruché with food — it is just so assertive on its own. ($18)

Madrevite C’osa Gamay del Trasimeno 2018
Gamay del Trasimeno — that’s a grape — has serious roots northwest Umbria, likely since the 15th century. But it’s not that Gamay! This grape is actually, according to DNA tests, the same vine as Sardinian Cannonau, Spanish Garnacha and French Grenache. It’s been here long enough, however — grown almost exclusively around the lake of the same name — that it has its own distinct personality. Juicy and friendly with dusty tannins, it features a hints of mineral and chocolate on the finish. Though I don’t find much of that typical Southern Rhone-style garrigue, an undercurrent of tar and earth adds Italian-style intrigue. (media sample)

Madrevite Che Syrah Sarà 2013
Syrah is obviously nowhere close to obscure, but as it’s not exactly growing in every Umbrian vineyard, this one intrigued me. Although initially skeptical of the 15% ABV, I was pleasantly surprised by the balance. There’s some heat, sure, but it’s not overwhelming. Tannins are soft and integrated. It’s oak-forward, which makes it taste kind of like any generic big oaky red, but it is otherwise well-made and fun to drink — though it still would be nice to see more terroir here. (media sample)

Tenuta di Castellaro Nero Ossidiana 2015
Named for the volcanic obsidian of the Lipari islands, the winery has claimed this as “the first, great classic red wine of Aeolian Islands.” It’s made primarily from obscure grape Corinto Nero, with 10% Nero d’Avola. What strikes me most is its mineral qualities, evoking the sea — not surprising considering the location and volcanic soil. I also love the earthy nose, as well as the plum and violet tones that match its deep purple color. ($25)