Can American Vitis species produce wines that compare with those made from vinifera on a global stage? If so, will the wine traditionalists ever accept them? While continued research and experimentation with these varieties will hopefully answer these questions, perhaps an educational introduction will get the ball rolling.

Of the eight species of grapes in the Vitis genus, six are native to North America, while only vinifera is native to Europe and amurensis to Asia. The powerhouse species native to Europe gives us varieties (also called cultivars) such as merlot, cabernet sauvignon, riesling, chardonnay, and sauvignon blanc. Basically every wine grape most of us can think of.

Of the six native species that had been growing in North America long before European settlers arrived, some may sound more familiar than others: rotundifolia (muscadine), aestivalis (summer grape), riparia (frost grape), labrusca (fox grape), mustangensis (Mustang grape), and rupestris (sand grape). Over the last hundred years some interest has been given to this rowdy and uncouth bunch of American species. While these grapes are not as widely cultivated or commercialized as vinifera varieties, they do show potential for making enjoyable wines and deserve to be recognized.

First, a quick look at the family tree, which may require a brief review of high school biology and taxonomic rankings. For our purposes we begin with the genus Vitis as the trunk of the tree. Moving upward, most scientists list two subgenera, with Muscadinia branching away on its own. This being the case, Muscadinia contains three species including rotundifolia. The key reason for this division has been the muscadine’s inability to successfully crossbreed with other species and create fertile offspring, similar to a donkey and a horse, due to their 40 Chromosomes in contrast to 38 for all other species.

From here, each of the species has numerous varieties within it. As noted earlier, with the exception of muscadine, these can interbreed with one another to create completely new varieties known as hybrids or inter-specific crossings. This sometimes happens in the wild—cabernet franc and sauvignon blanc crossed to create cabernet sauvignon, for example—but more frequently these crosses are the result of human manipulation.

This latter situation is typically an attempt to combine beneficial traits from two varieties into one, creating a new cultivar. Cultivars can be “crosses”—the result of two varieties within the same species (vinifera x vinifera) as well as “hybrids” between two different species of grapes (vinifera x labrusca).

Rotundifolia (muscadine) was the first species in North America to be heavily cultivated, and has a history of over 400 years. The living proof resides on Roanoke Island, North Carolina. Known simply as the Mothervine (right), this ancient muscadine is the oldest known grape vine in North America. North Carolina is the largest producer of muscadine, but over three hundred improved muscadine cultivars are currently growing throughout the southeastern United States.

Usually dark purple or black, rotundifolia also produces a bronze colored grape. The most famous of these is known as the scuppernong. Sometimes the term scuppernong is used interchangeably with muscadine, but should not be confused as muscadine is in fact the broader term encompassing all rotundifolia.

Muscadine has shown some promise for wine production but has run into some hurdles as well: The grapes tend to grow in small bunches between four to ten grapes, a significant problem for commercial harvest, and traditionally have a strong musky aroma. On the plus side, muscadine are extremely resistant to pest and disease, including phylloxera and Pierce’s disease, and have been used for dessert and port wines over the last five hundred years.

Vitis rupestris, interestingly despite its American origins, is more commonly used in France than anywhere else in the world. France uses a handful of rupestris cultivars as rootstock because of their phylloxera resistance and deep shooting, non-lateral roots. These same roots make rupestris well adapted to sunny slopes and hillsides as well as well-drained prairies throughout the Southwestern United States.

Vitis mustangensis has little to no redeeming commercial qualities. Limited in habitat to Texas, Oklahoma, and parts of Louisiana the mustang grape is highly acidic and bitter in taste. Simply handling the grapes can irritate the skin.

Vitis labrusca is almost singly known for its 1849 cultivar, concord, and its relatives such as the niagara. Further development of labrusca has been limited by its classic foxy or musky flavors and aromas, which have been deemed by most as unfavorable in comparison to those of vinifera—quite ironic, since flaws like Brettanomyces in Burgundy and Rhone wines and mercaptans in South African reds seem to be accepted, if not desired, elements of the sensory profile of those wines. Concord and niagara, while both occasionally used for creating a diesel-esque Riesling-like wine, are most often used as table grapes or for juice. The species is well suited to the northern stretches of the U.S. and much of Canada. 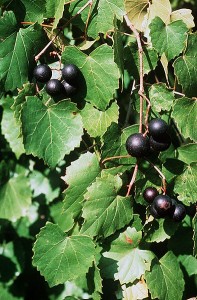 Vitis riparia is considered by many to be the most commercially viable indigenous American species for its use as grafted root stock and in hybridization with vinifera. On the downside, riparia is known for overly high levels of acidity and strong herbaceous aromas. Riparia’s strengths include its vast geographical range and soil adaptation from New England to Montana to Texas, its disease and pest resistance, and its cold hardiness down to -70 degrees Fahrenheit. Riparia is best known for its contributions to the cultivars baco noir, marechal foch, and frontenac. Wines from these grapes are gaining in popularity and commercial viability throughout the Finger Lakes region and Oregon.

Vitis aestivalis could provide potential solutions to the problems apparent with riparia. Aestivalis is known for having much lower levels of acidity and a flavor profile more on par with vinifera. Aestivalis is also pest resistant and cold-hardy but, unfortunately, is difficult to propagate through dormant cuttings, the primary commercial means of propagation. The best known aestivalis cultivar is norton, the official grape in the state of Missouri, but also widely planted in Virginia. As one of the oldest known American cultivars, the official heritage of norton is still debated, although most believe it to be a hybrid between aestivalis and vinifera.

How can one compare these American hybrids and native cultivars with vinifera when they exist in such isolated spheres? For the most part, wineries and vineyards are focusing on the best grapes available to them whether they are in California, Oregon, Missouri, Minnesota, New York, or North Carolina.

Is a malbec better than a tempranillo? Is a cabernet sauvignon better than a pinot noir? Beyond personal tastes, it is difficult to debate those questions, and rightly so. Great wines can be made from each variety. Is a baco noir better than a syrah? Is a norton better than a barbera? These also are essentially misguided questions. What is considered “great wine” is often based on personal preference, and tastes in the wine world evolve gradually, one wine drinker at a time.

Can indigenous American grape species make wonderful and complex wines? This writer strongly believes that the answer is most likely yes. But it will take time and continued experimentation for these varieties to find their full potential and their rightful place among the long respected giants of Vitis vinifera. So make an effort to discover which hybrids and native varieties are best suited to your region and sample the best that your local wineries have to offer. You may be surprised to find that your new favorite wine has no European heritage at all.