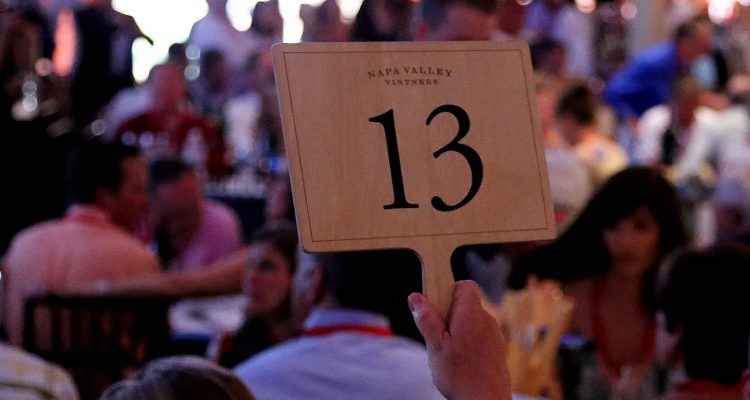 Vine Day’s Work: Behind the Scenes at Auction Napa Valley 2014

And that took a lot of ice — 28,000 pounds were ordered just for the Friday and Saturday segments of the event, held each year over the first weekend in June.
The ice is just the tip of a massive logistical effort fueled by hundreds of volunteers from the people directing traffic in sun-baked parking lots to the chefs cooking up white tablecloth-worthy dishes.
“It wasn’t just us who did this,” honorary co-chair Jeff Gargiulo of Gargiulo Vineyards summed up when the event was over. “It was the more than 1,000 Napa Valley vintners, chef teams, donors and volunteers.”

Here’s a snapshot from the auction supply list:
10,000: Number of wine glasses ordered for the Friday Barrel Auction and Marketplace and Saturday afternoon live auction.
6,000: Number of baby radishes, baby carrots and baby turnips served at Saturday night dinner by Meadowood Chef Christopher Kostow.
2,000: Number of plates used at the Saturday dinner
1,000: Number of ice cream floats at that dinner
500: Number of volunteers who help host the four-day event
50: Lots donated by member vintners for the Saturday Live Lot Auction featuring wine and one-of-a-kind experiences.
1: Number of hot air balloons stationed on the grounds of Meadowood, the luxury resort that traditionally hosts the Saturday live auction and dinner, to add a festive note to the proceedings.
The auction is run by the Napa Valley Vintners, the winery membership group.  Professionals are hired for things like putting up the tents and running the lights, but a lot of the work gets done by volunteers.
That includes people like Maxine Maas, who began as an auction volunteer in 1987 and liked it so much she now helps out year-round in the offices of the NVV, where staff work on a number of initiatives beyond the auction.
Her most memorable moment: Watching as a cork jacket was auctioned off the back of the late, great Robert Mondavi for $95,000 in 2005.
A striking figure with her coiffed white curls and bold red lipstick, Maas is getting ready to celebrate her 69th birthday this summer … for the 20th time. “I only cop to being 69 and I have my 69th birthday every year,” she says with a twinkle. She has no plans to hang up her  volunteer’s apron. “Once you start with it,” she says, “you kind of become a piece of a larger family.”
The auction wasn’t her first interesting job. In the ‘50s she was one of the “mermaids” who appeared at Bimbo’s 365 Club, a San Francisco nightclub featuring a fish tank behind the bar where a tiny girl appears to swim. In case you’re wondering, they do it with mirrors.
The magic at the wine auction is that you don’t see the muscle and sweat that go into the planning and execution, just the smooth results.
A bidder wins a lot and within seconds representatives who work for the agencies that receive the grants appear at the table ready to shoot a stream of confetti into the air and rev up the excitement level a few decibels. Right behind them are NVV staff members with notebook and pen who jot down transaction specifics.

This year, the auction paused briefly to show the Belmont Stakes on giant video screens and minutes after the race ended with Triple Crown hopeful California Chrome finishing a disappointing fourth, a platoon of waiters and waitresses bearing trays of burgers and fries appeared, cheering up the room considerably.
It all added up to a grand total of $18.7 million for the four-day event, which includes the barrel auction and an online auction as well as Saturday’s live bidding. Over the years, more than $120 million from auction proceeds has been invested in Napa County nonprofits.
Organizers took a moment to savor the results.
“We are amazed and humbled by the beyond-our-dreams results of this year’s Auction Napa Valley,” said Linda Reiff, president and CEO of the NVV.
Naturally, they’ve already started planning next year’s auction.