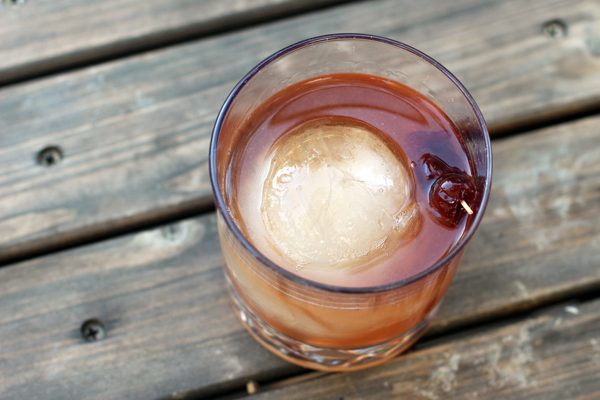 It’s comical to see someone’s reaction when I tell them I am smoking water for the sole purpose of making ice. It’s not exactly the most common thing you see on a barbecue menu. However, it makes sense. Hear me out.

You may be asking why anyone would want smoked ice, or rather, smoked water that is frozen into ice cubes. Who even thinks of this stuff?  I set off immediately to recreate this party pleaser and conversation starter after having a smoked cherry cocktail at a local restaurant.  I thought, “Why not smoke the ice, too?” Frankly I am laughing at myself for not thinking of doing this sooner because not only does any cocktail that requires ice get an immediate lift from the flavor, I am pretty sure it becomes the best barbecue story you will ever share with anyone.  Take that, brisket.

Liquid helps make the smoke adhere to a meat, so, for example, when you spray pork butt with apple cider it adds flavor and it adds important moisture for the smoke to “stick” to. In the case of just water, that liquid you would baste (or flavor) with becomes the main ingredient.

The idea is to get that smoke flavor into the water so you can then freeze it into ice cubes and use for cocktails.  But you also don’t want to smoke for too long, because then the ice will taste more like campfire ash.

How do you make smoked ice cubes?

First you need a large bowl, I like to use glass. Size will depend on how much ice you want to make and the size of your trays or molds. Next, you need your smoker pre heated to 200 – 225 degrees Fahrenheit. Remember, at sea level, water boils at 212 degrees, so you want to keep heat low to avoid boiling temperature. 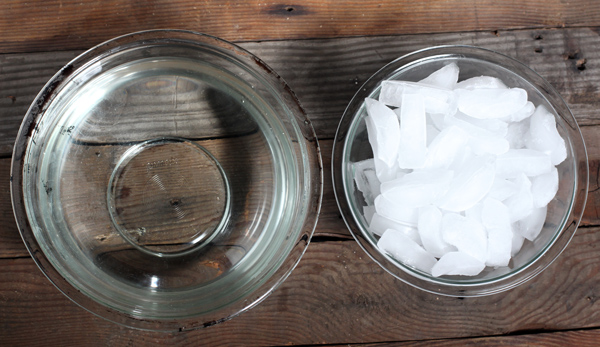 This is a very simple thing to do, but the one thing you want to avoid is smoking and making the ice cubes from water that is being used with cooking meat.

For example, you cook a pork butt and have a water pan keeping the humidity up in your cooking chamber. The water typically can take on flavor characteristics of the meat. And not always what you want in a pure ice cube. We want the ice to taste like smoke, not meat.  And of course there is the food-borne illness issue.

So when I smoke water to use for ice cubes, I smoke it on its own. Nothing else should be on the smoker.

Consider fruit woods for the mildest flavor.  In this case I like to get the heat up with charcoal and then only use wood logs or chunks from that point forward.

Next, take regular ice cubes from your tray or freezer and put them into the glass bowl.  Using ice cubes versus water from the tap is about surface area.  As the heat and more importantly the smoke moves throughout your cooking chamber, just water in a pan presents the top layer of the water for the smoke flavor.  Using the ice cubes on the other hand, provides a lot of surface area as the smoke travels throughout the chamber and adds more flavoring.

The longer the smoke the darker the color of the water and the more it will take on campfire characteristics. Because I am going for a softer flavor I keep it to a maximum of three hours. Other recipes call for ice cubes and then when they melt down, it’s done. Sure you can do that, but I find that it is usually an hour and not always enough to get some real flavor into the water.  Play with times to find your own sweet spot.

Finally, strain the water through a fine mesh strainer, as there may be some ash in it. Then let it come to room temperature. From there, transfer to your favorite ice molds and place into the freezer until frozen solid.

I typically love the smoked ice as an accompaniment to a Manhattan, Old Fashioned, Bloody Mary, and other mixed drinks that can use the extra kick. It’s fantastic with bourbon.

Let’s go back to that restaurant mentioned earlier.  It was a simple drink concept and of course we had to up the game slightly.  Essentially, they used smoked cherries, the smoked cherry juice, and mixed them with bourbon and served it over ice. We can save smoked cherries for another day. We fired up the smoker, made the ice and decided then and there it was a brilliant accompaniment to the cocktail… and because there just isn’t enough smoked love in the world. 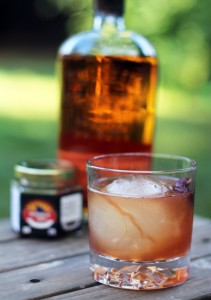 1.     Mix the bourbon, cherry, and lemon juice in a shaker filled with regular ice, and shake vigorously for about 20 seconds. Strain into a low-ball glass with your smoked ice cubes.
2.     Add the smoked cherries directly into the cocktail.
3.     Slowly savor the deliciousness and see how the drink evolves as the ice begins to slowly melt.