Practically at the top of the sky, in long, barely visible lines that stretched almost from horizon to horizon, the geese flew northward. On the Mississippi River, just below Lock & Dam 24, a group of pelicans floated at the edge of the whitewater, waiting for unwary fish. A bald eagle, patient as any human fisherman, sat quietly in a tree, white head bright as a beacon, eyes fixed on the river below. Hawks slowly circled a farm pond, coasting on the gentle wind currents in a perfect display of aeronautic balance. 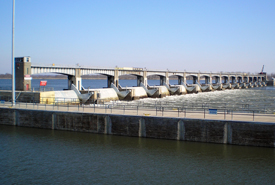 Bald eagles are regular winter visitors to Clarksville, Missouri, some 70 miles north of St. Louis, where a working lock for river traffic keeps the water open and the birds well-fed. Founded in 1817, and almost midway between St. Louis and Hannibal, the town of fewer than 1,000 people has a prime location on the Mississippi River flyway, a north-south migration route traveled by thousands of birds every year.

The area may seem unlikely as an epicenter of organic food and wine, but a handful of locals are pushing the envelope to make that transformation.

Nathalie Pettus, whose family has lived in the area for more than 150 years, has turned a riverside gas station into an inviting restaurant, the Clarksville Station. She has also renovated properties on top of the bluffs into warm, comfortable, antique-dotted bedrooms.

Rackheath House dates to the 1860s and was named for the Pettus family’s English manor. Another, Cedarcrest Manor, was built by a riverboat captain in the 1840s.

“My father used to tell me this part of Missouri was a combination of Virginia, Vermont, and England,” Pettus said, looking across a grassy field with the river in the distance. And while guests have to journey down the hill for the rest of breakfast, she’s hoping to have coffee available for early-morning sipping on the verandas.

Chef Tim Grandinetti, whose grandfather emigrated from Naples in the late 19th century and opened a restaurant in Hudson, N.Y., moved to St. Louis to open the Renaissance Grand Hotel. He then left to join the Marriott organization, then took to the small-town life where home-grown, organic produce is an industry on the edge of a breakthrough.

“We’re going to grow some of our own herbs and vegetables,” he said, “and we’ll have bees on the property.” Grandinetti’s cuisine features country fare like barbecue and fresh catfish, along with many more exotic dishes based on seasonal availability. He’s assisted by Justin McMillan, a young sous-chef with a bright future in a modern operation that serves three meals a day in addition to an active bar.

The patio is available when the sun shines bright and warmer weather arrives.

For balmy seasons, the restaurant has a large patio area with a bar and a pizza oven providing snacks; a 12-foot fire pit piled high with logs brings warmth to chilly nights.

Atop a nearby bluff and only a couple of miles from Grandinetti’s kitchen is Vesterbrook Farm, where Mike and Carol Brabo grow a wide variety of organic vegetables. They also raise lambs and heirloom Bourbon Red turkeys fed on grains and vegetables.

Organic is also the word when it comes to wine. Pettus, who has a strong restaurant background, is assembling a list she hopes to keep under $30 a bottle. She is looking at Wente‘s organic products along with other California wineries, like the Mendocino-based Bonterra, also an organic producer. She has talked to several Chilean producers, including Casa La Postale, Novas, and Emiliana, whose Natura line is rapidly becoming one of the largest among organic wine producers. Pettus, like this writer, is especially fond of Chilean reds, with a special focus on those from merlot and carmenere grapes.

“There are some fine wines made from those grapes,” she said, “and they’re a good fit with my palate. I hope many of our guests will try them and come to think that way, and Tim’s menus will have dishes to complement them.”

She is aiming at a well-rounded, moderately priced list, and has had conversations with the Schlafly Brewery, now the largest American-owned beer producer in St. Louis.

The area offers diversity for every palate.

A few miles west is Tievoli (read it backwards) Hills, a resort with vacation rentals, time-shares, homes, and camping sites owned by Crown Valley Winery, whose main operation is in Ste. Genevieve, Missouri. The winery’s aging facilities for Port Wine are in the main lodge at Tievoli, and there’s a tasting room for Crown Valley wines.

And after a great meal and great wine, visitors still have the countryside for their enjoyment.

The eagle-watching area extends to the Illinois side of the river, with communities like Alton and Grafton, and a lovely state park named for Pere Marquette near the confluence of the Mississippi and Illinois Rivers. Alton has a casino, and Grafton is big on food and drink, highlighted by the Fin Inn, where one eats surrounded by huge fish tanks, a perfect site for a discussion of the scene in “Hamlet” where William Shakespeare muses about the distinctions between eating and being eaten.

Joe Pollack has been writing and talking about sports, wine, food, entertainment and other happy subjects for more than 50 years for newspapers, radio and TV stations, magazines, newsletters, blogs, and other means of disseminating words and opinions. He has children and grandchildren scattered throughout the world, and a wife, Ann Lemons, who is a good writer and an even better cook. He writes at St. Louis Eats and Drinks.