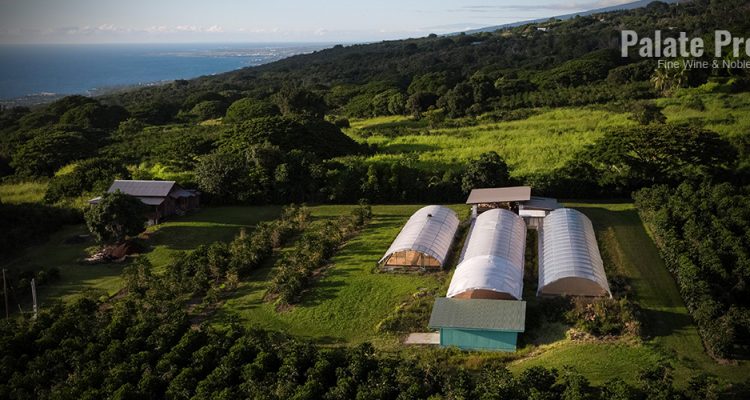 Coffee and wine have much in common. Their aroma, flavors, and level of intensity—mellow to strong—draw people to pour a cup or glass. Finding pleasure in both coffee and winemaking influenced Scott Burr to launch his 100% Kona-grown Carta Coffee Merchants.

Burr grew up with his hands purpled from sorting grapes and running harvesting equipment on his parents’ California winery. While at college for enology and food science, Burr first tasted artisanal, freshly roasted coffee and was hooked on the quality contrast to commercial products.

Burr began a career as a wine consultant. Wherever he traveled, he continued to seek out beans roasted by craft producers. Vacations to Hawaii brought sun, surf and sampling of 100 percent Kona coffee. The epiphany of tasting Kona coffee triggered Burr’s intense interest in the area. Burr studied the geology and climate of the Kona area and concluded that the coffees matched and exceeded other producing countries around the world.

After two decades, Burr separated from the intense overload of consulting work., Burr had a clear vision for his next career.

“I wanted to be near the ocean, make fine coffees and get back to my farming roots.” Said Burr

A look at how Burr translated the Kona terroir into the unique blends of Carta Coffee demonstrates his commitment to both Kona’s tradition and his entrepreneurial innovation. Burr’s mission is to satisfy coffee drinkers from beginners to aficionados via his 100 percent Kona coffees.

What is 100 percent Kona Coffee?

Though the state of Hawaii has 11 coffee growing regions, 100 percent Kona comes from beans only grown and processed in the Kona region of the big island of Hawaii. Situated along the slopes of Mauna Loa and Hualalai volcanoes, Kona is known as the state’s “coffee belt.” The minerals from the volcanic soil and the weather—sunny mornings, humid and rainy afternoons and mild nights—yield ideal growing conditions for the beans.

But “Kona blends” in the supermarkets contain only 10 percent Kona coffee beans. The other 90 percent can be inferior beans grown anywhere in the world. Various organizations in Hawaii are attempting to have the label “Kona” only refer to 100 percent Kona grown and not commercial blends, but these legal debates continue.

Burr learned the history and traditions of the area before purchasing his own farm. Coffee trees were not native to Hawaii. The first trees were planted by Samuel Reverent Ruggles from cuttings from Brazil in 1828. People soon recognized that Kona coffees could be delicate yet flavorful with rich aromas. Soon production increased. But the 1899 world coffee market crash caused the large growers to lease their land to workers, many from Japan. Many of the same families own small farms today. There are over 600 Kona growers with small acreage.

In 2011 Burr purchased six-acres of mixed elevation land on the slopes of Mauna Loa in Kona and named it Nolyssa Farm after his children Nolan and Alyssa. With an interest in geography, Burr founded his new business as Carta Coffee with a map logo and a nod to the Latin word for map.

With assistance from a recognized expert on 100% Kona coffee agriculture, Burr replanted five-acres of coffee trees on the property. Four years later Burr was ready to harvest his beans and buy some from sustainably-minded small growers.

The new coffee producer quickly fell into the rhythm of the growing cycle.

In February and March, Burr checks out the white flowers on his trees. Known as “Kona snow,” the blooms mark the spring awakening and development of the coffee fruit. Full ripeness occurs from August to late January depending on elevation and aspect towards the sun. The fruit ripen to a dark red color and are called cherries.

We pick the trees about 12 times during the season to only select the ripest and healthiest cherries for our coffee, said Burr.

There are two bean processing methods. The wet process is commonly used. The cherries are milled (pulped) to release the beans which are then soaked in water for 12 hours. While soaking, the beans ferment and shed their parchment, skin-like coating. The beans are then placed on decks to dry for about two weeks in the Kona sun or are mechanically dried with gas heat.

With the wet method, said Burr, “The fermentation process is easier. But the water washes away flavor from the bean, leaving mainly citrus notes. We want to preserve all the flavors of the coffee bean.”

Burr uses a natural, dry method for processing. “The beans are milled to remove the outer covering and given a quick wash, but beans aren’t soaked to allow fermentation. This is called the “honey” method because the beans are sticky—and thus take longer to dry, up to four to five weeks. This process yields beans that have more leather, citrus, chocolate and dried fruit flavors.”

Another natural method which entails drying the whole cherry. This oldest of processing traditions entails drying the whole cherry and then manually pulled from the now-hardened pod. After roasting, these beans have a more complex, nutty and sweet flavor.  For both natural methods at Nolyssa Farm, the beans are placed on drying decks and manually raked for 10 to 12 weeks.

Burr also buys beans from growers using the wet method for some products. The Carta Coffee Latitude Roast Side-by-Side (SBS) Tasting Sampler enables one to taste the difference between wet and natural processing.

Dried beans are then classified and sorted by grade based on size, shape, and quality. The beans are then ready to roast in heated, turning drums. Light roasting may take 12 minutes, showcasing fruit and acid of the coffee. Darker roast may last up to 30 minutes when the beans may begin to smoke.

“If half the secret to coffee is great beans, the other half is precise roasting,” said Burr.

Kona coffee in the market

Burr sells his coffee online, with darker, deep flavored Captain’s Roast the most popular of his half-dozen products. Burr’s goal is to see Carta served at more restaurants when they fully re-open.

“Coffee service is the last thing restaurants upgrade, though coffee is usually the last memory of taste at the meal. The food, the service, the wine—all get much more attention than coffee,” said Burr.

Mixologists are beginning to appreciate how artisanal, roasted coffee beans can add intriguing flavor to their cocktails. Ginny’s Gin in Sonoma, Calif. has developed recipes with Carta Coffee.

Sustainability is key for Burr. For soil and pest management in the humid environment, he uses a majority of organic products.

While presenting Carta Coffee at nationwide festivals, he looks for organizations such as Project Open Hand of the Bay Area to prepare blends for fundraisers.

With limited travel during the pandemic, Burr is home tending to his farm and handling business remotely. Though Burr starts his day sipping Captain’s Roast, at sunset, he may hark back to his third-generation wine growing roots and pour a glass of well-balanced Grenache from Benovia Winery.

“This ocean-lined landscape is a lovely place to grow coffee. I look forward to welcoming visitors at Nolyssa Farm to show how we go from farm to cup to make Carta coffee,” said Burr.