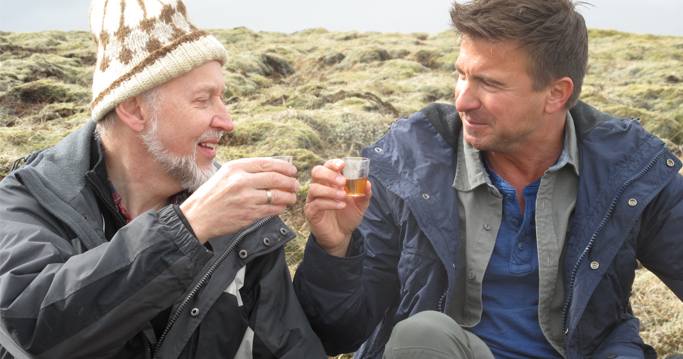 Once there was a little kid who snuck into bars in South Boston and shined shoes. You could to do this in Southie a few decades ago, if you were a local kid like Jack. As he worked, Jack listened to the stories guys told in the bar: stories of adventure, of traveling the world – all exaggerated as the day wore on – but he wouldn’t have known that. Young Jack hung on their words, and determined that one day he would travel and have adventures. He would get along OK, he knew, because he’d go to bars and meet people, having learned about “alcohol’s magic socializing power,” as he explains it now. Young Jack grew up to be Jack Maxwell, a journeyman actor who relocated to Hollywood. And Jack Maxwell became the host of Travel Channel’s new series Booze Traveler. Meant to be, right?

Booze Traveler is now in the middle of its initial 15-week season. After seeing a rough cut of a vigorous and lively episode with a wide range of drink experiences in Turkey, I talked with Jack on the phone. On the screen, he’s a 40-something who looks like a guy from “the neighborhood.” Could have turned out rough but didn’t, medium height, dark slightly tousled hair, keeps in shape, probably most comfortable in a leather jacket and jeans. In person (on the phone) he sounds like he looks: a likeable, neighborhood guy who happens to travel around the world now – and is quite comfortable in local bars, cafes, and also in people’s kitchens.

Booze Traveler is a great concept for a show: criss-crossing the globe to find local drinks, and learning about the country and culture in each place. Jack and the production team spend anywhere from ten to twenty days in a location – which has been researched beforehand, too. Jack himself is there to socialize and to learn, which he does well onscreen, in a variety of settings. He also supplies some location context and history with (necessary) voice overs.

Both host and show are finding their feet a bit at first; they must balance authority and naiveté, familiarity and discovery – and in some instances, a struggle between political/religious customs and partying.

Inevitably, there will be a comparison between this show and Anthony Bourdain’s food/travel show on CNN, and I think Booze Traveler can create its own niche. It focuses on drinks, which is what attracted me to the concept.

Host Maxwell is called on to drink a lot of strange liquids, from alcoholic custard to “spit beer” but he told me he never got sick from anything he ate or drank. Which led him to consider how alike people are, not how different, he said.

He visited everywhere from European restaurants to Amazon jungles, discovering how people developed their home-grown drinks, and exploring local drinking customs and culture. Among other experiences ranging from South Africa to Iceland, the show follows a roaming Mongolian tribe and visits a backyard still in America’s South.

Asked about wine, Maxwell related, “In Japan there’s a wine bath. We were in there splashing around. There were kids and old people too. I was sitting next to a 95-year-old woman who swears it’s good for her skin… and it clears her brain.” (Not what I had in mind when I asked about wine, but a good wine experience, nonetheless.)

What does Maxwell drink at home? “I’m a cocktail guy,” he admits. “Martinis, things like that.” The website for the show will also have one cocktail recipe per show. Maxwell explains, “We will teach you how to make that drink, with things that are available” – in case you don’t happen to have any spit beer or Mongolian…whatever, at your local liquor store.