All You Ever Wanted to Know About Wine Grapes 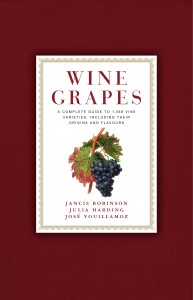 Wine Grapes, the huge new encyclopedic work by Jancis Robinson, Julia Harding, and José Vouillamoz covering 1,368 varieties of grapes used to make wine around the world, is at once full of surprises and unsurprising.

It is full of surprises because it is full of information about the secret life of grapes and the largely unknown (up to now) family histories of grape varieties and their travels around the world. It is unsurprising because, like pretty much anything that Jancis Robinson has been associated with over the years, it is as thorough, nuanced, and bursting with information as you’d expect. New discoveries and further exploration of little-known varieties in places like Turkey or Portugal, among others, will surely warrant other editions of the book, over the years, but at the same time, it does have the quality of one would call a “definitive” work.

There is much to learn in just about every entry of Wine Grapes. As Jancis Robinson wrote in an email interview for Palate Press, she was herself surprised by the amount of information that had never been published and is genuinely new: “I learnt of literally hundreds of relationships between varieties of which I’d been ignorant—all due to DNA profiling and specific inputs from my co-author José Vouillamoz. It’s very interesting to discover that thousands of varieties are descended from relatively few ‘founder varieties’, some of whose identities are quite surprising.”

There is indeed a dual level of interest in the book’s entries. One level is the entries themselves, divided into a series of standard sub-headings: berry color, principal synonyms (which can take up to a third of a page), origins and parentage, viticultural characteristics and, finally, “Where it’s grown and what its wine tastes like.” Those categories in which the entries are divided provide a great mix of botanical, genetic, historical, agricultural, oenological, organoleptic, and geographic information.

There is a lot of information on every level for each grape, for wine lovers as much as for viticultural experts, whether in the half-page for cabernet severny or lumassina, or in the six or seven pages for cabernet sauvignon, chardonnay, or pinot noir. If anything, Wine Grapes will tell you that if you’re tired of drinking Merlot, there’s plenty of other stuff to choose from. Better yet, it also identifies producers of note for every variety and just about every part of the wine-producing world.

In that sense, the publication of the book is very much aligned with what Jancis Robinson called “The swing from global to heritage,” in a recent article. The rebirth of interest in the diversity and local character of wine is indeed an important trend, worldwide, and as José Vouillamoz pointed out to me in London, last May, it may help us reconnect with the reasons why vignerons from hundreds of years ago decided to select and nurture specific varieties.

The second level is about the interrelations between those varieties, showing the sometimes surprising parentage of well-known grape varieties—like pinot noir, gamay, chardonnay, and dozens of other French varieties actually all descended in one way or another from the undistinguished gouais blanc. Finding out that there are genetic relationships between the savagnin of Jura and the chenin blanc of the Loire or the silvaner of Alsace, among others, rewrites our general impression of varieties as being fully distinct entities. Through the family trees drawn up by Dr Vouillamoz, one can see unexpected relationships between French, German, Austrian, Italian, and Spanish varieties.

It does seem as if the map of  “national” grape varieties, like the map of national cultural identities, as drawn up through the nationalist visions of the 19th and 20th centuries, is in need of revision. People—and plants—were much more mobile, historically, than we tend to account for. “It does highlight many of the migrations we know of in history, and suggests some others,” adds Jancis Robinson. “I think many people may be surprised by how many ‘French’ varieties actually originate in Spain, and that Italy has so many more varieties than anywhere else.”

Getting this information out is at once what the authors are most proud of—and a matter of technical disappointment, as Robinson indicated: “There are 14 family trees in the book, some of them so complex there are more than 150 family members. Those for Pinot, Prior and Brianna take up 2 or even 3 pages. Because the book is so thick, 1,240 pages, the gutter is very deep. Unfortunately the publishers made no allowance for this, so some of these fascinating pedigrees gets lost in the gutter. We authors are gutted by this as you may imagine. But we do provide the complete diagrams free for anyone at www.winegrapes.org/perfect-pedigrees”

Despite those small gutter issues, Wine Grapes is a stunning piece of multidisciplinary scholarship. And one with a sense of humour, too, as some varieties’ presentations show: Niagara is introduced as “the foxiest American hybrid of them all,” for instance, while Clinton is presented as a “Pre-Civil War natural American hybrid of historical interest only,” so you can smile while being a total wine geek. Whether you’re looking for information on little-known Québec hybrids, the remarkable alpine varieties from Valais and Aosta, or recently revived wine grapes from Romania, Friuli, or Hungary, you’ll find it in there. Everyone and anyone interested in wine, from the neophytes to the most expert, will learn a lot from reading it.