Wines of the West Bank

This is a recent development. While Israelis have been making wine in the country since before it became a nation, the industry was focused on making lots of cheap wine until the 1990s. To make cheap wine, undisputed Israeli territory in the warmer parts of the country was great.

And now, when you want to branch out into more different fine-wine areas, you naturally start looking at the West Bank.

At this point I’m going to stop and acknowledge two things about the people reading this article. 1: Most of you are American Jews or Israelis. Most of the rest of the world, unfortunately, lost interest at “Israeli wine.” I wish that weren’t true, because it’s a fascinating country wine-wise. 2: Among American Jews in particular, about half of you will read about agriculture coming from West Bank Israeli settlements and think, “That’s awful, I don’t want to support that,” and the other half will say, “That’s great, I want to support that!”

Me, I don’t know what to think. I support wine grapes and fine-wine culture. An optimist could see a real chance for cooperation, with Palestinians growing the grapes to Israeli specifications, and everybody being happy. That, unfortunately, is not what’s going on.

To illustrate, let’s start with the exceptions. I offer two fine wines from Recanati, a kosher winery where Italian-trained Ido Lewinsohn is the winemaker.

Our first wine is a reserve Carignan from a dry-farmed vineyard that’s not in the West Bank. It’s lively, with berry fruit, minerality and a nice chewy mouthfeel. Highly recommended.

“The grower is an Israeli Arab,” Lewinsohn told me. “He grows bush vines. We were lucky to find him because he grows this way because his father grew it like that. All of Israel has moved to the VSP training system. This is the only one left. The site is hot limestone on the way to Jerusalem. This gives us an authentic expression. If it was not for the low yield and the bush vines and the dry farming, we wouldn’t be able to make this wine. This Arab is Christian. So it’s …”

Our second wine is currently one of Israel’s most famous after appearing in the New York Times. It’s made from Malawi, a heritage grape discovered by DNA research that may be 2,000 years old and may be the same grape named in the Talmud.

Muslims destroyed the wine grape industry during hundreds of years of ruling the region. In recent years, a plant biologist named Shivi Drori looked for indigenous grapes growing wild in abandoned villages and alongside creeks and he found more than 150. One day our descendants might be able to drink wines made from some of these vines used by their ancestors. In the meantime, there is Recanati Malawi, made from fruit that Drori discovered a Palestinian selling as eating grapes in Bethlehem.

I like Recanati Malawi: it’s mild. Quiet. Slightly floral, with light melon fruit. It’s not strongly flavored: it tastes like a wine made from big grapes grown for eating, which of course is what it is. What a wonderful story that Israelis are buying these grapes from a Palestinian grower to make this heritage wine. Except the grower “doesn’t want his neighbors to know, because they might not like it,” Lewinsohn told me. This is why you don’t see the grower’s picture or read his name in the stories.

Israel is a country at war with itself these days in many ways, and I don’t mean only between Jews and Arabs. Culturally and socially, Israeli conservatives and liberals are at each others’ throats. Before I went to Israel there was a tempest about a local wine guide refusing to include wineries that are in the West Bank. The conservative party complained and held a tasting of settlers’ wines in the Knesset to support their wineries.

I knew about this when I visited Israel’s annual Sommelier conference, in a hall in Tel Aviv (a delightful bustling beachside city with a great food scene). So I asked the West Bank wineries to talk about it.

Vered Ben-Sa’adon is owner of Tura Winery, a West Bank winery that fought hardest against its exclusion from the guidebook. She and her husband settled their land in Mt. Grizim, where they rent 200 acres from the Israeli government on which they planted mostly wine grapes and some olive trees. “Of course it’s a mission,” she said. “We believe it’s our land. Of course it’s more dangerous, but you’re on a mission.”

Two hundred acres is a huge vineyard for anywhere, even more so for Israel, and guess what: “We sell our grapes to more than 30 wineries,” Ben-Sa’adon said. “Even if people boycott (West Bank wines), they still drink my grapes all over the country.”

It could be disinformation – an attempt to remove the “otherness” of West Bank wines. It’s shattering news: your wine from Israel might actually not be from what you prefer to think of as Israel. But I believe her.

I also spoke with Assaf Rosenberg, son of Gush Etzion Winery’s winemaker. Gush Etzion is a huge settlement that dominates a major road crossing not far from the West Bank city of Hebron.

“In the Bible, Jacob was blessing this area,” Rosenberg said. “He’s going to have so much grapes that he can wash his clothes with wine. In the Second Temple of Jerusalem, all the wine was from this area. My father looked at this area and said, ‘How are there no vineyards in this area?’ Today, 20 years later, there are 200 acres. We have the right to return the production of wine and grapes.”

I agree with that. I dislike the Ottoman Empire for destroying the world’s library of indigenous wine grapes. So how did you get the land?

“Mainly it’s areas of the kibbutzim [agricultural communal collectives],” Rosenberg said. “Our family has something like 20 acres of grapes that we own in areas where nobody was before. The Arabs are growing a lot of grapes, but it’s grapes for eating, not wine. The Arabs are not giving their grapes water, so the Arabs are planting their grapes in the valley. We are growing our grapes up the sides. We prefer it. It’s giving some kind of peace to the land. We each get something different from the land.”

That made me so happy, and it has an internal logic. And I really liked Gush Etzion Unoaked Chardonnay: floral, peachy and aromatic. If Rosenberg had stopped there, I would have spent my free time in Israel differently, and this story would end here. I rather wish he had.

But then he said, “Gush Etzion is the area where we have peace with the Palestinians. Of course they mind that we’re there. But most of the economy of the Palestinians comes from us. The simple people in the village prefer the situation as it is now. They prefer to be residents of Israel and not to be residents of a Palestinian country. Because as it is now is better for their life. I’m speaking with friends in the village and they say, ‘We’re glad you’re here.’ It’s more complicated than just one people and another people.”

I wanted to use that quote. I want to run with the image: Palestinians sharing the land with the settlers, and even happy with their neighbors. Of course I couldn’t do it without having a look. Rosenberg invited me to come and visit Gush Etzion; Ben-Sa’adon invited me to visit her vineyard. But I already had their perspective.

So I got on the public Arab bus in Jerusalem and headed off to the West Bank as a tourist. In Bethlehem I met a driver named Mohammed (naturally) who offered to take me to Hebron.

Along the way we passed the Gush Etzion crossing, which looks like two enormous American shopping malls surrounded by a bustling military guard: checkpoints, drive arounds, serious guns. I got out my camera and Mohammed said, “You cannot take picture here, not at the crossing. They will shoot me, directly. The Army does not know you are with me. They see a Palestine tag. They will shoot.”

The road to Hebron is surrounded by grapes, grown in the pergola system. Grapes are everywhere, on seemingly every stretch of arable land. Maybe there are more 2000-year-old varieties here.

But Hebron itself is tense. I’m not going to recount all the stories I heard from Palestinians, but I will tell you I met two volunteers from Europe who escort Palestinian children to and from school. Why, I asked. They told me the Army recently teargassed an elementary school because a small boy, age 5, threw a rock at a barrier.

This story could really get bogged down here. Seemingly random Palestinians have stabbed seemingly random Israelis. There are provocations. This is a wine story, in search of a happy ending. 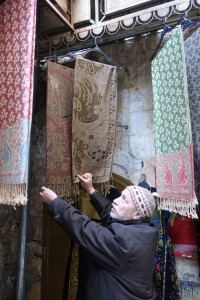 I left Hebron with a carpet. I bought it from a shop where settlers throw eggs on the carpets from above; the shopkeeper leaves the stains there to show the very rare tourists who come by. It’s a beautiful hand-sewn carpet, but it’s too big for my apartment so it’s rolled up in my closet. I bargained for the carpet and the dealer left me feeling guilty, but with a good price. Mohammed made me feel guilty for not wanting to pay him more than the sum we agreed on (I also took him to what must have been the most expensive restaurant in Hebron for lunch.) I left the West Bank just feeling bad overall: bad about my transactions, bad about the lives of the people I’d met, and bad that I couldn’t in good conscience write an easy wine article for Palate Press about high-elevation vineyards and heritage vines.

I got back to Jerusalem, dropped off my carpet, and headed out to a Tel Aviv-style place: young, lively, creative cocktail menu, terrific food. I sat at the bar and felt so much at ease, safe, comfortable, welcome. The wine list didn’t have any West Bank wineries, even though some were just a few miles away, but in another world.