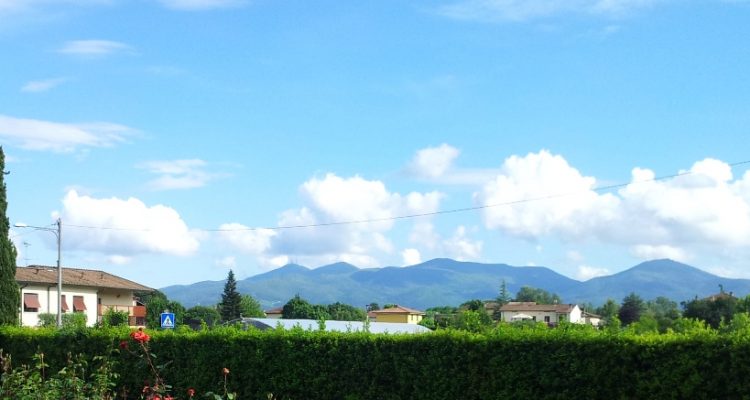 The viniferous joys of Lucca

Less than fifty miles west of Florence, the handsome walled city of Lucca is not exactly unknown, but its wines certainly are. Given the attention Tuscany receives in the entertainment industry and from wine-loving tourists alike, it might come as a surprise that there are worthwhile wines and even entire appellations that are overlooked. This is the case with wines from the two DOC appellations of Colline Lucchesi and Montecarlo, north and east of Lucca, respectively. With the exception of a handful of labels, these wines rarely reach the United States, and few of the wineries produce more than 100,000 bottles each year.

During a summer visit to Lucca, local wines impressed me with a breadth of quality. From the distinctive, but readily appreciable rosso and bianco made at a tiny winery a quarter-mile from our rented villa to a the flagship Super Tuscan of one of the better known local producers. Having spent time in the previous year visiting wineries and winemakers in both the Collio and Montalcino, arguably the top white and red regions in Italy, respectively, I still came away with a high regard for the wines produced near Lucca.  These may not approach the best of the Italian wines, but there is plenty for the discerning palate to enjoy.

As with the rest of wine-producing Italy, the quality of the Lucca area wines has increased dramatically in the last few decades. Before the 1980s much of wine produced was bulk wine, vino sfuso, simple quaffable wine sold for local consumption. Umberto Rossi, the owner of Tenuta Santa Maria, was quoted in the hefty 2010 book about the region, Lucca Wine Treasures that “thirty years ago, generally, the house wines served in restaurants were very mediocre. It seemed to be the same red everywhere. Today this is not the case. Producers are more competent and the quality has improved from the more basic wines right through to the more important wines.”  That quality is certainly evident.

Like much of the rest of Tuscany, Sangiovese reigns supreme, and takes the lead in most of the red wines.  Somewhat unusually, Merlot plays second chair in Colline Lucchesi, and Syrah, Merlot and Cabernet Sauvignon are frequent companions in blends or are occasionally solo efforts in Montecarlo.  It seems that a winery in Montecarlo began experimenting with these French varieties in the 19th century, use of which later spread throughout much of the Lucca area. But also, as elsewhere in the region, natives Canaiolo, Colorino and Ciliegio play supporting roles in each appellation. What both of Colline Lucchesi and Montecarlo share are a knack for producing very well-made, full-bodied dry reds with enough enjoyable fruit that pairs well with the notable acidity and body.  And, for me, these wines tasted Tuscan.  The winemaking techniques were modern: barriques are often used for the pricier wines, and many of the grapes are French, but the wines I sampled were rooted in the region.  An earthiness and vibrancy was present even with the bigger wines, and the cherry, raspberry or plum notes never predominated. Being Italian, the wines were all eminently food-friendly, too.

Though outshone by the reds these days, Montecarlo gained renown in the past for its whites, which are regarded as among the best white wines in Tuscany. In fact, Montecarlo whites garnered one of the earliest DOC designations back in 1969. Native Trebbiano and Vermentino are most common there, but Sauvignon (Blanc), Chardonnay and Roussanne are also culled.  Pinot Bianco, too.  While nearby Colline Lucchesi makes use of Grecchetto and Malvasia.  Excellent vin santo, a perfect finale to an enjoyable meal, is also made from white grapes from both appellations.

A proper place to experience some of the vinous pleasures of the area is Enoteca Calasto, a charming, small wine bar and restaurant within the walls of Lucca, across from the church which hosts concerts featuring the music of native son Giacomo Puccini. Run by a couple of transplants, Lars and Carole Stork – he is from Norway, she is from the UK – who take pains to promote the wines of Colline Lucchesi and Montecarlo. Fittingly, Lars was also the editor of the Lucca wine tome.  They offer flights of wines from each nearby appellation and more than 150 different labels from which to choose.  Bolstered by a fine kitchen serving local specialties and well-curated food purveyors, it is an enjoyable, relaxed place to explore the regional gastronomy. Even their house red was a first-rate Syrah from Montecarlo bearing the innocuous Rosso di Toscana designation, which was lighter-bodied than might have been expected at 13.5% alcohol, and more balanced than its cheap tariff would indicate.

It was at Enoteca Calasto where we purchased what I thought was the best wine of the two week stay in Italy, the Fubbiano I Pampini. Rich, with an aroma and red fruit, cherry and plum, it had fair amount of fruitiness balanced with a proper amount of acidity and smooth, well-integrated tannins, a hint of the expected earthiness, and a complexity one would hope for with a special bottle. It was absolutely delicious, and would be terrific with hearty fare or an aged cheese. Its smoothness belied its 14.5% alcohol.

Unusually, it was made with 10% Teroldego in addition to 90% Sangiovese. The addition of the Alto Adige-native Teroldego gave the I Pampini a slightly unusual twist, maybe a tinge of smokiness or freshness. Whatever it was, it worked. We paid 35 euros for the bottle in Lucca. From what I have seen, if you can find it in the U.S., it is about $40, and likely the best Super Tuscan that hardly anyone has heard of.  It’s just one of the joys of the fruits of the Lucca area.