The world’s most pathetic wine grape

This story is about the world’s most pathetic wine grape.

Its history is exaggerated. It was used for a few decades to play one role that is no longer needed, yet still people grow it – though even its proponents don’t think it has much virtue.

It reminds me of the nebbish in a World War II platoon: it can’t shoot straight or do anything else of value, but it’s one of the gang and survives, so it shows up at all the reunions and people look on it fondly. The fact that it survives says more about the rest of the platoon than about the nebbish itself.

The grape in question is Colorino. I told English wine book author Stephen Brook that I was planning to write about Colorino and he said, “Just what the world needs, 1,000 words on Colorino.” How meta: my story is as superfluous as its subject.

I asked Luiano owner Antony Pombo, who has been growing Colorino for 50 years, about its flavor.

“Flavor? Flavor?” Pombo said, shaking his head. “Is not very … the Colorino, is for the color. It’s good for the super Tuscan because it’s very red.”

I got to thinking about Colorino recently in the only place one can. I was in Florence tasting a roomful of Chianti Classicos. The only reason Colorino hasn’t gone the way of the passenger pigeon is that it was, for some decades, included in Chianti and Chianti Classico. And the Chianti Classico region is all about appropriating tradition: Chianti Classico, an archipelago of a Tuscan region created in 1984 to try to separate quality producers from mass-market jugs of Chianti, is celebrating its 300th anniversary this year. That’s not a typo.

If Colorino is the nebbish, Chianti Classico producers are the platoon.

Just as in a platoon, there are folks who keep the nebbish alive and others who think the platoon would be better off without it. There’s a lot more Merlot than Colorino in Chianti Classico now because winemakers believe Merlot gives not only color, but a pleasant rounded texture. And there’s more Cabernet Sauvignon than Colorino, even though Cab changes the character of a wine in a way that’s instantly recognizable. But Cab, while it tastes and smells like a French grape, has an advantage: it actually tastes like something.

“I know if I add the Merlot in this wine, it can be better,” Ca’ di Pesa winemaker Diego Ciurletti says about his Chianti Classico Riserva, which has no Merlot in it. “But I think it is good, this wine. It’s important to maintain the story of the wine. Colorino and Canaiolo is the story of Chianti Classico. Now is too much wine with Merlot and Cabernet. With Merlot and Cabernet you can make a standard wine. With Canaiolo and Colorino, you make a classic wine.”

Chianti wines date back to the 13th century, but at that time they were white, and we cannot imagine now what they tasted like prior to refrigeration and reliable means of preventing oxidation. Take a Pinot Grigio and leave it open on your kitchen counter at room temperature for a week; that might give you an idea.

In 1716, the Grand Duke of Tuscany officially recognized the League of Chianti, three villages that are part of Chianti Classico today, hence the anniversary. It’s believed that Canaiolo was the top grape at the time, but these wines were field blends, with Sangiovese and Marzemino playing big roles. Canaiolo, thus, is truly traditional, and it is still somewhat common in the region today.

In 1872, Bettino Ricasoli published a Chianti formula: Sangiovese supported by Canaiolo, to soften the tannins and give more fruitiness, and the white grape Malvasia.

Colorino starts to pop up in mentions from the early 20th century. Chianti producers, unbound by rules at the time, were planting anything that made sense. They used a lot of white grapes, so a black grape that adds color made a lot of sense.

Chianti still allows white grapes, but in 2006 Chianti Classico banned them from the blend. This, IMHO, is a mistake: some of the greatest Côte-Rôties are pure Syrah, but banning Viognier would lessen the pleasure of a lot of fine wines. I get that the Consorzio doesn’t want Chianti Classico producers adding 20% Trebbiano for volume, but 2% Malvasia would add a lot of aromatic interest.

With this no-white-grapes rule a decade ago, any rationale for Colorino in a winemaking sense is gone.

“With the right terroir, Sangiovese is a really great grape,” Fattoria Lornano owner Nicolo Pozzoli told me. “People used Canaiolo or Colorino if they weren’t able to get very good maturation of Sangiovese. But now with global warming, they can.”

I spent most of my tasting in Chianti Classico trying to see if I could smell or taste Colorino in a blend. I tasted wines where producers use a little Colorino (nobody uses more than 10%, and 5% is most common) in one wine, and none in another. I think maybe Colorino adds a murkiness to the aroma; 100% Sangiovese tends to have greater purity. For flavor, there are so many variables – vintage, barrel regimen, reserve vs. entry level – and I could not detect any consistent Colorino note, unlike Cabernet, which jumps out of its blends. I tried the same experiment with Merlot and found that it, too, mostly buries its flavor in a Sangiovese blend. It’s hard for me to argue that Colorino adds something that Merlot does not.

That said, here are a few Colorino-including wines I liked better than their more expensive siblings. L’Orcio a Ca’ di Pesa Chianti Classico 2013, with 5% Colorino, is more intense and spicier than its pricier, 100% Sangiovese, Riserva counterpart. Tenuta di Capraia Chianti Classico 2014 (5% Colorino, 5% Canaiolo) is peppery and perfumey: not as impressive initially as its 100% Sangiovese Riserva counterpart, but more appealing to drink a bottle of. Villa Mangiacane Chianti Classico Riserva 2011 (5% Colorino) tastes like an archetypal wine of the region; the winery’s pricier Gran Selezione, with 5% Merlot, tastes more international.

I also really liked Caparsa “Doccio a Matteo” Chianti Classico Riserva 2012, an organic wine with 2% Colorino: it tastes like an iconic wine of the region to me.

“It’s not necessary to have Colorino for a blend of the wine,” said Caparsa owner/winemaker Paolo Cianferoni. “What’s important is the feeling. Colorino is an autochthonous grape. It’s important to use. It just adds the color. And that’s it. Colornino produces very low acidity. Many years ago, before global warming, it was important to put a lower acidity in the wine. Many people add Merlot for that reason. I don’t use Merlot, I use only noble red grapes from the region. Now, in 2015, it’s not necessary to add Colorino.” 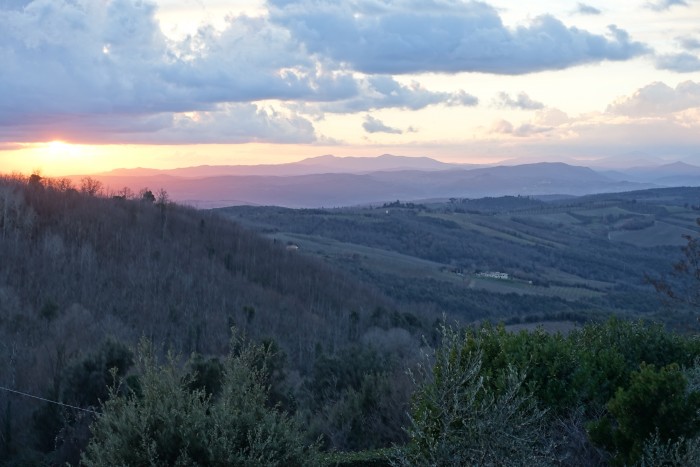 If you want to try Colorino, Tenuta Il Corno in the larger Chianti region makes a 100% Colorino wine. It’s solid: berry aromas with some oak, good balance, plenty of tannins but they’re not grippy. It’s not complex, but it’s fine. I tried the 2009 vintage because those tannins need time to mellow. Verena Moser, Tenuta Il Corno sales manager, says the wine is made from own-rooted old vines that survived phylloxera, and the secret is to pick it later than Sangiovese because it takes longer to ripen. She also says researchers at University of Pisa discovered that the clone of Colorino in their vineyards exists only on their estate. Yet nobody is asking them for cuttings.

I can’t help feeling affection for the world’s most pathetic grape. Even its name is pathetic: it’s as if I were named Bloggerino. But it’s hanging in there. While a lot of it was ripped out or grafted over in the 1990s,  nobody I spoke to this year is removing it, and a few were even planting more. When I asked why, they shrugged.

“We are planting some Colorino, but not very much as it’s very difficult to plant,” said Luiano’s Pombo.