The Road to Green Energy

For most wineries, taking steps to be greener takes place in the vineyard, first and foremost, and in the cellar and warehouse next. At Shinn Vineyards, on the North Fork of Long Island, things are also green above the vineyard, where a brand new wind turbine is turning and providing renewable energy for the winery.

Getting to that point was far from simple, though, as the environmentally friendly project had to work its way through local regulations and politics. But for David Page and Barbara Shinn, it was important to push on, for both environmental and economic reasons: “Sustainability is an essential ingredient to good stewardship of our land. Utilizing natural resources like solar and wind is good for the environment while helping to sustain the bottom line.”

The addition of wind energy is also part of a philosophy that approaches wine production in a global manner, adds David Page: “Biodynamics asks us to create as best we can a full circle of sustainability. Integrating wind and solar forces in our vineyard system allows us to farm in a more holistic way.”

In the story below, Page recounts the twists and turns that marked the long road from a green idea to reasonably quiet and fully functional electricity production.

Over three years ago I started attending meetings in Southold Town Hall that were convened to discuss a new wind energy code for agricultural lands. Our town leaders were not yet ready to allow residential properties to construct wind turbines but thought it was time to allow them on agricultural lands. There was passionate discussion on both ends of the spectrum. 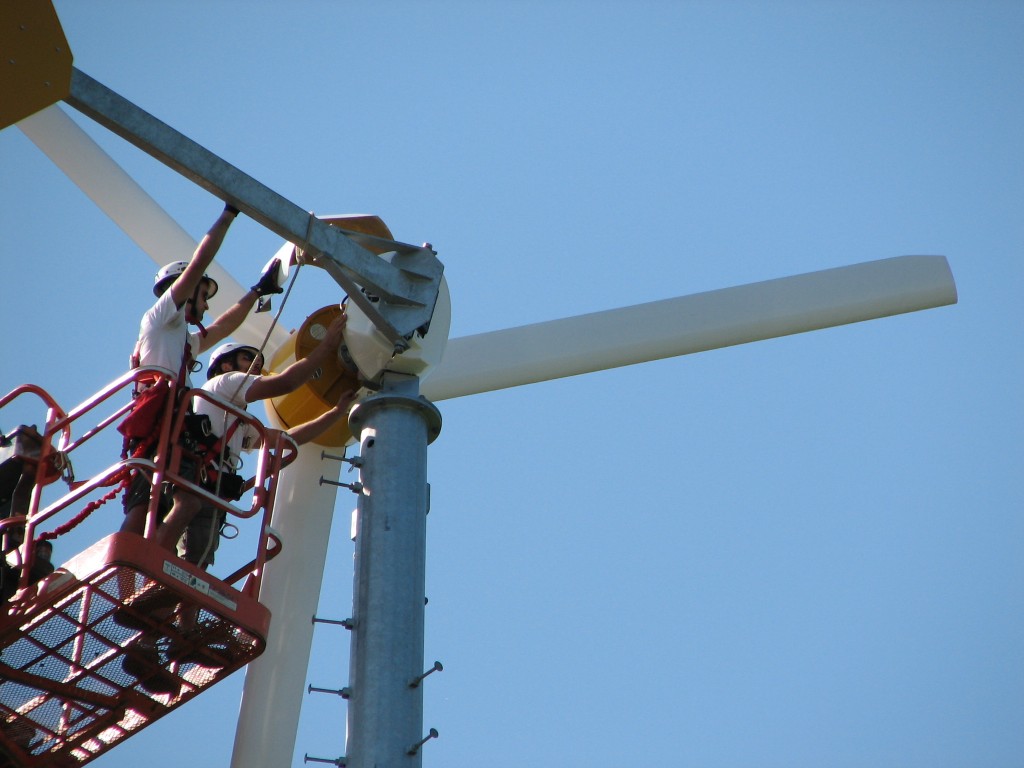 One of the members of the audience was particularly concerned about the harm that wind turbines could potentially cause to young children. The elderly man with a commanding voice and English accent informed the group that he had been working in the wind energy development business for over 30 years and was concerned about the “throw zone” of the turbine blades.  He described a scenario where during high winds the turbine blades could break off from the tower and be hurled through the air – then crash through the window of a passing school bus, decapitating young innocent children. No one laughed. It was then that I realized how difficult it would be to install a wind energy system on our vineyard.

After a year or more of debate, a reasonable wind energy code was drafted and published in the local newspaper to be debated at a public hearing. I read through the draft legislation and was satisfied with the language and planned to attend the public hearing to voice my support. At the last minute I was unable to attend. Later I learned that there was one person who spoke at the hearing in opposition to the new legislation and it was tabled. I started to become suspicious.

Several months passed before the legislation was brought before the Town Board to be considered again. The Town attorney claimed that only minor changes had been made to the legislation so no new public hearing was necessary.  In fact, the Town Board had significantly changed the setback requirement in the legislation from the height of the tower plus 10 feet to 300 feet from the nearest property line. By law a new public hearing should have been set. That did not happen. With no further discussion, the now very restrictive legislation was passed. The problem is that that with this new restrictive language the number of farms that could take advantage of wind technology was greatly reduced.

Our contractor determined that the best location for our new wind system would be outside of what was allowed by the wind energy code, and that we would be required to ask the board of appeals for a variance.

During the course of waiting for a hearing date we obtained letters of support from the Agricultural Advisory Committee, Alternative Energy Committee, Preservation Committee and several members of the Town Board. All of these committees and board members strongly advised that the Town Board amend the code language so the setback requirement would revert back to what was originally proposed. This would have allowed our project to go forward without the lengthy process of obtaining a variance. Not too surprisingly politics prevailed and it did not happen.

Three months later we finally had our opportunity to make our case in front of the board of appeals. After we explained our plan to the committee, it was time for the committee to ask us questions. The chairman of the committee wanted to know what would happen to the wind turbine during a hurricane. He was concerned that it might fall on top of a wedding tent filled with unsuspecting revelers and cause gruesome loss of life. How do you answer a question like that?

Another couple of months went by and we were finally granted a variance, which required us to move our wind turbine location 12 feet from the original proposal. In addition the board of appeals required us to install a light at the top of the 120-foot tower. Unusual request since the FAA requirement is 200 feet, but we did not argue further. Now we could go forward with our project.

After years of fighting the bureaucracy and then months of installation delays and equipment adjustments (at first, the alternator sounded like mating harbor seals) we are now powered with renewable alternative energy. Coupled with the rebates from our local utility, grant money from the USDA and state and federal tax credits our wind turbine will pay for itself in less than five years and continue to operate nearly maintenance free for another 25 years. Combined with our solar installation our electricity is generated entirely on site. In spite of all the delays and setbacks it has been well worth the effort.