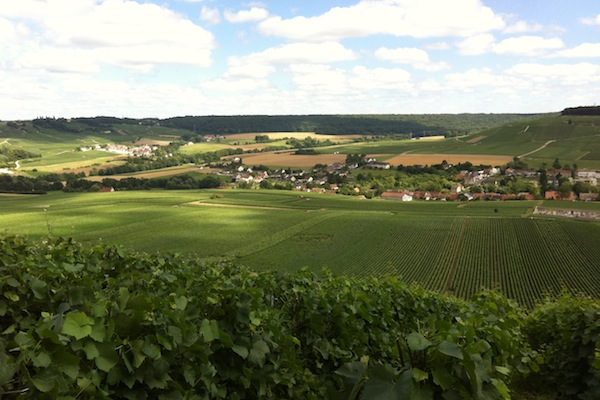 Terroir in Champagne: Will Terroirists Kill the Blends?

The Champenois have long struggled with the notion of terroir. Unlike nearby Burgundy where just about every vineyard has had its terroir defined, in Champagne one will often speak about the generic Champagne terroir: that which makes Champagne’s wines unique. Common elements of this generic terroir are the region’s poor, chalky soils, the continental climate, a dense planting system and the selection of the three main grape varieties – pinot noir, pinot meunier and chardonnay. Common characteristics of this generic terroir in the wine are freshness, great acidity, minerality and longevity.

A major reason for the reluctance to recognize specific, individual terroir is the strong culture of blending in this region. Champagne is almost by definition a blended wine: 85% of Champagnes produced are non-vintage (now also called multi-vintage): or a blend of wines from several harvests. In fact, each winter a Champagne cellar master or winemaker will work for weeks to craft their Champagne house’s signature blend. This is a three-way blend: across varieties, villages and vintages. In fact, blending has been common practice in Champagne; it was introduced to assure reliable quality in the wines.  For centuries, each Champagne house has been defined by its ability to blend wines into a consistent house style every year.

Yet, however little mentioned, there are significant differences between the wines of the three hundred and twenty villages in Champagne. Locals have long known that pinot noirs from Aÿ in the Valléde la Marne, for example, are very different to those from Les Riceys in the Aube. The same goes for chardonnay: a wine from Le Mesnil-sur-Oger is known to be more austere than, say, chardonnays from the southern villages of Epernay — which are less than ten miles north.

These differences between the villages have been defined in the cru scale which was established together with the appellation in 1927. All the villages in the Champagne appellation were given a score based on a 100-point scale. Currently there are 17 grand cru villages with a score of 100, 42 villages with a score higher than 90 who are considered to be premier cru; the rest of the 320 villages are included because they had a score higher than 80. It is important to state here that the scale judged the quality of the wines as well as the impact the wines could have within the blend. Thus even in the classification, the blend remained key.

The first exception to the blending rule was Champagne Salon. At the beginning of the twentieth century Eugene Salon, a rich fur merchant, decided to defy common Champagne practices and make his champagne only in the best years and only from chardonnay grown in Le Mesnil. He took this decision after being advised by his brother-in-law, who was a local wine maker, that the chardonnay from Le Mesnil had a superior character to any other chardonnay grapes, especially when aged extensively.

A second tradition-defying wine was created in the 1930’s, when the Philipponnat family purchased the Clos des Goisses, a very sunny vineyard in Mareuil-sur-Aÿ. Almost straight away they decided to make a special cuvée just from this vineyard. Since the vineyard was planted with both pinot noir and chardonnay the two varieties were blended, but just as Salon had done before, Philipponnat decided to only make the wine in the best years.

Single cru wines, and later single vineyard wines started to appear again in Champagne in the early 1980s, when a few enlightened Champagne makers who – under influence of Burgundy’s iconic wines — started to focus on some of the best parcels and vinify them separately. They had understood that it was a way to set their wines apart from the rest of the Champagne landscape.  In other words, they saw the definition of their own terroir as a way to add value to their brand.

In 1976 Henri Krug took the opportunity to purchase the Clos Tarin in Le Mesnil, which had previously been one of the 20 vineyards which supplied Salon. He renamed it Clos du Mesnil and made the house’s first single vineyard wine in 1979. Anselme Selosse came back from Burgundy around the same time with the intention of making wines who were the “essence of the earth,” resulting in single cru terroir wines from his vineyards in Avize, Cramant and Oger. Pierre Larmandier made his first single vineyard wine (Vieille Vigne de Cramant) in 1988, the year he took over the family estate. Around the same time, in the Vallée de la Marne Jean-Mary Tarlant created his Cuvée Louis, one of the first single vineyard wines that did not come from a grand or premier cru area. The early days were not easy for these terroir pioneers but they persevered and eventually started to receive recognition for their wines — which are now very often sought after.

Fast forward the clock another 20-odd years and we see that single cru/single vineyard wines have really gotten another boost. The influence from Burgundy is more than tangible in the younger generation, which leads the implementation of single vineyard vinification in Champagne. This group understands that small plot vinification allows them to understand the real potential of their terroir, and are critical in making real terroir wines.  Interestingly enough a lot of these new terroir wines are more of an expression of a particular cru as perceived by the winemaker than single vineyard wines in the strict sense of the word. However, they have exposed the previously hidden diversity of styles and flavors of the region. And the fact that these terroir wines are scarce seems to make them even more desirable, especially at international level where they continue to win the hearts of as many Champagne afficionados as tradespeople.

Champagne terroir wines have also formed a connection point within the region as several groups have formed in the last few years to organize events. Tastings are specifically created to show off the individuality of the terroir and they include the vins clairs (Champagne’s still wines) as well as the finished champagnes, to allow visitors to better grasp the specificities of these wines. Now in their fifth year, these tastings have become so successful with the French and international trade and press that rumors have been popping up about the establishment of an official “Grand Jours de Champagne” tasting event. If and when this happens, Champagne as a region will unofficially have acknowledged that (as in Burgundy) there are vast differences between the different villages and hillsides, and that the uniqueness of the terroir patchwork can play a role outside the blend as well.

[author] [author_image timthumb=’on’]http://palatepress.com/wp-content/uploads/2012/05/caro_twitter-e1337129825708.jpg[/author_image] [author_info]Caroline Henry is a wine educator as well as a wine marketing and social media consultant based in Champagne. She holds a WSET advanced certificate and is a certified sommelier studying for her advanced sommelier certificate. She has a particular interest in Champagne, terroir and natural wines and food and wine pairing. She blogs about all things wine related at Missinwine and Vinogusto[/author_info] [/author]