Taking Our Vitamins and Minerality

Minerality. It is one of the most commonly used words to describe both red and white wine, and yet it remains one of the most confusing. Consumers new to wine often laugh quizzically when a critic or tasting room pourer describes a wine as displaying “minerality.” Merriam-Webster doesn’t even recognize it as a word—and they’re not exactly keeping the door locked on the English language, having recently added “agritourism,” “fanboy” and “soul patch.”

So what, exactly, is meant when someone claims a wine’s aroma offers “minerality?”

Nothing. Seriously—technically, it means nothing.

That’s because minerals—rocks, such as limestone and schist—are not volatile. They don’t themselves emit aromas. “Our olfactory system is designed to detect volatile compounds,” explains Cornell enology professor Gavin Sacks. “Therefore, if we claim that a river rock has a smell, we are almost certainly smelling something volatile formed by contact of the rock surface with water—say, the remnants of decomposing algae.”

Despite the colorful motto of wrestling champ Dwayne “The Rock” Johnson, you cannot actually “smell what The Rock is cooking.” When we smell a rock, we must be smelling something else.

Even if this fact is known in the hallowed halls of Cornell or UC Davis, wine writers must have missed the memo. When it comes to describing a wine’s aromatics, minerality not only remains part of the wine lexicon, it’s thriving like never before. A simple Google search shows the term used by writers and bloggers around the world, from wine critic Jancis Robinson to Kori Voorhees of Wine Peeps, from Wine Enthusiast’s Steve Heimoff to—ahem—even me.

And it was used recently by one of the world’s most respected and influential wine critics, Wine Spectator’s Jim Laube. After tasting the 1961 Chateau Haut-Brion,  Laube attempted to describe for his readers the wondrous nose of this legendary bottle. He didn’t use only one instance of the confusing descriptor—he actually doubled down (emphasis mine):

“The aromas were sublime, with mineral, pebble, tobacco, dried currant and a loamy, earthy herbal edge that evolved into the cedar smell of a cigar box.”

I wrote Laube asking what he meant, here. At the very least, I’d have posited  that “pebble” was a subset of “mineral,” and so wouldn’t expect to see both terms hanging together on the same street corner. Laube wrote back his reply:

“I associate the pebble (or crushed rock) scent/taste with a pile of pebbles (or stones), and I often find it when I walk on a dry riverbed. White pea gravel for me also combines that “pebble” with minerality. There is also for me a wet pebble or stone scent that comes when they get wet. I keep a rock from Haut Brion in my office, a memento from hiking through the vineyard, which is deep gravel soil, and that character comes through in this wine, the perfect definition of terroir.”

I don’t begrudge Laube his enological pet rock. But here the terms “pebble” and “mineral” only serve to confuse the issue. After all, how many readers might have hiked the same dry riverbeds as Laube? And how many keep a rock from Haut-Brion on their desk for reference? 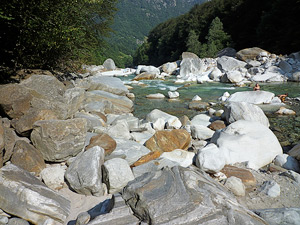 Each person’s understanding of minerality comprises a range of unique experiences. For me, the term doesn’t conjure dry riverbeds at all, but rather the rushing Chautauqua Gorge in western New York where I spent my summers as a child. The chilly water passing over slate and stone offered up smells that left their imprint on my memory. There’s no way now to know what caused these smells, but when I think “minerality,” these imprinted olefactory memories come rushing back.

I suspect this is why, despite the imprecision of the term minerality, I and many other writers stubbornly adhere to it—not because we’re lazy, but because we want to capture and convey the sense of a vivid memory.

Here’s another wrinkle: though minerals in wine don’t give off aromas, they can impart flavor. But the flavors they offer are so many and varied that, again, using a single catch-all term like minerality can cloud rather than clarify the meaning. In the Rhône Valley,  residents might associate minerality with the taste of iron. On Long Island, they might think of saline. Other tasters use the term simply to refer to a wine’s vibrant acidity.

“Considering the diversity in usage, I think ‘minerality’ is being used to describe several sensory attributes, not just one,” says Cornell’s Professor Sacks. “There appears to be inconsistency among wine professionals about when the term ‘minerality’ is applicable, especially in comparison to terms like ‘jammy,’ ‘smoky,’ and ‘tropical fruit.’ Hopefully, future work at Cornell or elsewhere can start to make sense of this term.”

Confused yet? Me too. As the Finger Lakes editor for the New York Cork Report, I would be handicapping myself mightily if I were to abandon this term. That’s because, again, these wines awaken my sensory memories of river rock and gorge water. And Finger Lakes Riesling is often positively crackling with miner—excuse me, with vibrant acidity. The 2006 Ravines Dry Riesling, for example, tastes to me like wrapping a river rock in a lime peel and taking a bite.

See, isn’t that more effective than saying it offers “minerality?”

Here’s my proposal: when wine drinkers encounter this term, they should ask for more detail. And  wine writers should take the bold step of ditching the term from their wine vocabulary.

I’ll be the first writer to take this pledge. It won’t be easy, but this way, we will all enjoy sharper descriptions of both aroma and flavor. If a wine smells like crushed rock, or saline, or lime peel, or if it makes you think of summers at the gorge, that evocation will convey far more meaning for the reader than a vague catch-all ever could.

— Evan Dawson is the Finger Lakes Editor for the New York Cork Report and is completing a book about Finger Lakes winemakers. His paid job includes offering his best Ron Burgundy impersonation as a morning news anchor and political reporter for WHAM-TV in Rochester, NY.