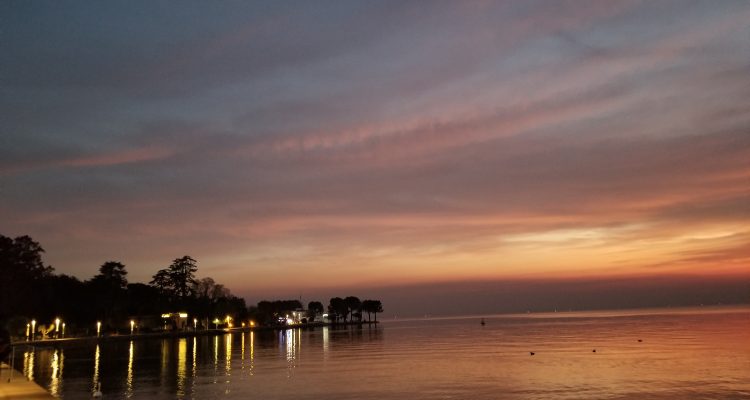 Looking for a Light Red Wine with Fish? Bardolino Is Back

Headed to Bardolino, Italy, I wasn’t sure what to expect. Though granted DOC status in 1968 for its deliciously light reds, industrialized, bulk production in the 1980s tarnished the region’s reputation. But the recent resurgence of Chiaretto, the area’s rosé, has quality on the rise. Had the traditional rosso, I wondered, benefited as well?

My journey there was inauspicious. Bad winter weather grounded me first in Albany, then in Newark overnight. But I perked up the next day, on a lovely Sfogliatelle-filled flight to Venice, and then by car to the village of Bardolino.

Those snow-capped mountains, the landscape sprinkled with palm trees, olive and lemon trees, agave plants and stately cypresses. The colors! Lake Garda — Italy’s largest lake — is gem-like, a cerulean-turquoise blue, reflecting the sky and the mountains and hills of Lombardy, Veneto and Trentino-Alto Adige that surround it.

Upon arrival, my uncertainty was almost immediately allayed. At a tasting with dozens of producers, the Bardolino Rosso was a revelation: some of the freshest, juiciest and most consistently, across-the-board-irresistible wines I’ve had in recent memory. At most large wine tastings, there’s a clear top tier, an acceptable middle and a rock-bottom category. But here — while there were a few stand-outs and a barrel-scraper or two — the vast majority were excellent.

Produced with Corvina, Rondinella and Molinara grapes, Bardolino Rosso is pale red and fruit-forward, with a delicate but definite structure carved out of the cool, windy, morainic terroir. (While Lake Garda provides moderating temperature variations, the surrounding hills protect the local vines, allowing grapes to reach full phenolic ripeness in what would otherwise be a chilly grape-growing region.) It’s a perfect accompaniment to the region’s many delicate lake fish creations, and is even better slightly chilled.

Puzzled by the gap between the reputation of Bardolino Rosso and reality, I asked anyone and everyone who spoke English for intel. This disparity is both straight-forward and complex, winemakers explained. For starters, Bardolino, like many other winemaking tourist hot-spots, fell victim to its own success at a certain point. In the 1980s, in response to demand, production ramped up — way up — and industrialized growing and production techniques became the norm.

Meanwhile, Robert Parker was rising to prominence, and his tastes reflected the 80s go-go Wall Street era of extravagance, gilded opulence, and over-the-top everything, from shoulder-pads to wine flavors. Out with subtlety and delicacy in the wine world, in with texture that could be sculpted, explosions of flavor. In other words: Napa Cab. Parker’s influence and the corresponding desire for big, full-bodied, bash-you-over-the-head, food-unfriendly wines made the classic, bright flavors found in Bardolino decidedly un-chic.

Plummeting quality and unstylish varietals and flavors sent these wines to the bottom of the U.S. liquor store shelves, if they even arrived at all — a situation that dragged on well past the turn of the millennium.

Journey Back To Quality

Now, on the other hand, Bardolino feels more au courant than ever, with fresh flavors that pair well with a variety of foods, not to mention Instagrammability in both color and label. The best wines are made using chill, sustainable vineyard practices, small-batch production and indigenous varietals. Returning to the region’s roots, however, has been difficult and expensive, and has required not only the coordination and support of the regional wine consortium, but also the cooperation of dozens of individual producers.

Leading the charge is Angelo Peretti, director of the region’s consortium, Consorzio di Tutela Chiaretto e Bardolino. By focusing, according to Peretti, on what’s happening in the vineyard — planting native grapes instead of international varieties, encouraging more sustainable agricultural practices and reducing yields — the region’s wines have returned to their fresh, fruit-forward, delicate origins. Simply put, winemakers have re-learned to value quality over quantity.

“We decided to go back to the roots of Bardolino through the recovery of three historical subzones: La Rocca, Montebaldo and Sommacampagna,” Peretti adds. (See Map.) “On top of that, in 2015, we created a technical committee made up of local winemakers responsible for ensuring that there is a correspondence between the wines and the traditional style of the subzones. We are very strict about these checks because we are committed to retrieving the distinct identity of the region and the subzones.”

Now that they are overseeing the appellation, the Consorzio has made several significant changes. A rigorous system of quality control includes reducing the yield per hectares (from 13 tons to 10, in the subzones) and changing the focused production region. The organization also promotes outreach events like the tasting I attended, and travel by representatives and producers to major metro markets in the U.S. and elsewhere.

A handful of producers — Le Fraghe, Gentili and Gorgo — stand out to me, weeks after returning from Lake Garda. I can still feel their passion, see their commitment to the land, taste their delicious wines.

In many ways, Matilde Poggi pioneered the region’s return to its roots for Le Fraghe, beginning to adjust vine-training and pruning techniques in her family’s 70-acre vineyard to reduce yields in the early 1990s. (She made her first vintage in 1984 at age 22).

Poggi’s goal is to create wines that reflect the unique terroir in the region. “The aim for Bardolino,” she says, “is showing the diversity of vineyards with a different soils. I am producing a single-vineyard Bardolino now, labeled Brol Grande, which shows how Corvina can make wines with a good body and a noticeable spiciness.”

Enrico Gentili, the winemaker and owner of Azienda Agricola Gentili, feels the industrialized form of agriculture his region had adopted was not only detrimental from an ecological standpoint, but disrespectful to the region’s proud history, and ultimately, was imperiling its economic viability.

“It was humiliating to continue producing Bardolino to be sold at low prices to people who don’t care about the quality and the shelf life of my wines,” Gentili says. “I thought about my winery and the great potential that the old vineyards could still express, I weighed the intuitions that my father had had 40 years ago when he founded our family’s winery — I knew that much more could be obtained from an amazing land like mine.”

Gentili recalibrated how he worked said land, which spreads across gentle hills and plains under the Monte Baldo chain north of Verona. He began minimizing any chemical interventions, lowered yields and focused on teasing out intricacies of the terroir, allowing flavors from the mineralic soil and wind-whipped grapes to shine through, creating more savory and salinic wines in the process.

“By changing course and working even more in my vineyards, we gave birth to the kind of wine that I really like: sincere, frank, long lasting,” Gentili explains.

“By studying my vineyards closely,” Briocolo says, she created “an awareness and search for harmony and finesse [that are] are key for our Bardolino wines. Indulging the territory instead of forcing it allows us to extract aromas and flavors that enrich the fruit of the wine.”

Reds from Le Fraghe, Gentili and Gorgo — and from Bardolino in general — are increasingly available in the United States, a reflection of the slow but sure rise in the region’s reputation, corresponding to its winemakers’ renewed commitment to terroir and authenticity. I recommend sipping them alongside fresh fish, as they do there. The key is matching the texture and flavor of the fish to the wine, meaning milder fish work best: roasted salmon, no; butter or olive-oil poached trout or pike, yes. (It’s also a great match for white meats and vegetable dishes.)

Last night, for example, I served a young, light red Bardolino Rosso, slightly chilled, with lemony cod and roasted parsnips. Looking out onto my backyard, swathed in 18 inches of fresh powder in arctic Upstate New York, I was right back on emerald-green Lake Garda, sipping light reds and petal pink rosés, an easy, breezy sip of paradise. And though I can’t help but look forward to returning in person, for now, I’ll settle for another glass.