Putting Aussie Shiraz Back on the Map, In More Ways than One

My wife came home and saw me with a giant map spread out on my lap. “What are you doing?” she asked.

“Writing a story about Australian Shiraz,” I said.

I’m leading with this because it’s not the way people think about Aussie Shiraz. Common perception is that if you need reference material, it would be a thesaurus (“Honey, what’s another word for ‘jammy’?”) 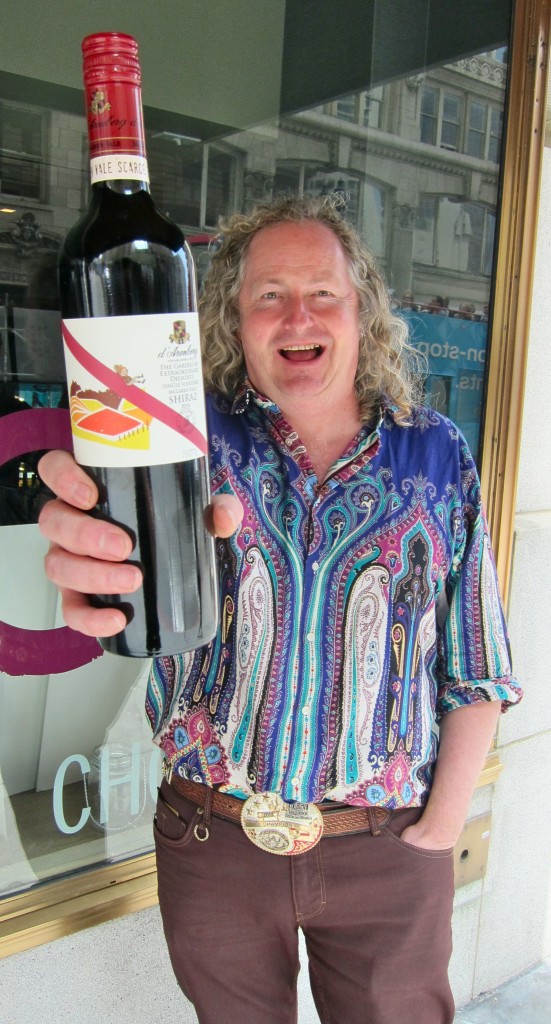 Chester Osborn, the 4th-generation owner of D’Arenberg, has a plan for fixing that. Instead of making one great $65 McLaren Vale Shiraz, he’d like to show you 13 interesting $85 single-vineyard Shirazes. Hence the very detailed map.

Crazy, right? Raise the price, and give your distributors 14 times as many products to sell. But there’s some logic to it.

Aiming at the oenophiles

In the fruity, big-bodied red category, Americans have moved on to Malbec. For a 300,000-case producer like D’Arenberg, there’s not much headway to be made fighting for the entry-level wine drinker anyway.

The big-points chasing drinkers, who paid attention to Australia when Robert Parker was raving over its most explosive fruit bombs, aren’t interested now that Parker himself doesn’t review the country’s wines.

This leaves enophiles, which could be a winnable market. Australia can make fine wine as well as any country in the world. But much of the world seems to have forgotten that.

One word that not many oenophiles associate with Australian Shiraz is “terroir.” And for good reason: Australian wineries spent years telling us it doesn’t matter.

The Economist, in complaining 13 years ago about Parker’s discovery of Aussie reds, praised “the willingness of the country’s wine makers to puncture some of the snobberies and myths that surround the world of wine … Rather than philosophising about terroir, they have specialised in blending wines from different regions. That, in turn, has allowed the big companies that dominate the Australian wine industry to demonstrate that it is possible to produce excellent and consistent wines in large quantities.”

Large quantities, blended, consistent: Osborn has seen a different light, and on ripeness as well.

Looking to Europe (in the cellar)

“In the 90s I was picking riper and I accepted some shrivel in the vineyards,” he says.

“My drinking of masses of bottles of expensive European wines,” he says. “And I’m tired of drinking wines from around the world that get flabby and tired. I particularly don’t like how some wine journalists mark only the warm vintages as worth having.”

Osborn has a 14,000-bottle cellar, made up of mostly Italian and French wines.

“I drink a lot of Barolo: [Bruno] Giacosa, Mascarello,” says Osborn, who can thank his father d’Arry for some of his collection. “I like the way [Roberto] Voerzio’s getting better again. I have Bordeaux, all the big names, but I don’t like the way Bordeaux’s getting riper and riper. I love old Bordeaux, it’s fantastic, that forest character, the falling-leaves notes.”

Osborn wants to make his wines to age. His single-vineyard series all clocks in about 14% alcohol.

But there’s more to it than that. “I’m really focused on minerality, length, and oak integration,” Osborn says.

13 vineyards for laying down 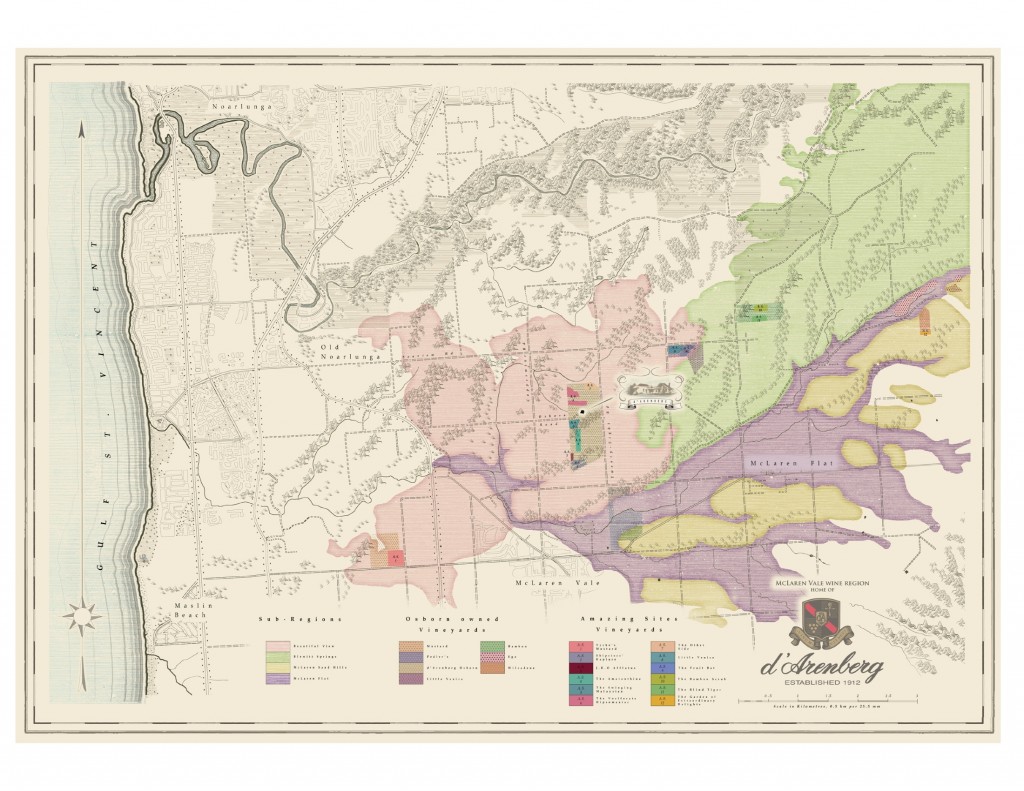 Osborn has been using Shiraz from the 13 vineyards (and a few more) to make The Dead Arm McLaren Vale Shiraz. All 13 vineyards are within 10 miles of each other. According to the large map on my lap, six of them are nestled within 1 square kilometer; you could probably legally combine them and call it a single-vineyard wine. Some of them are actually touching (not me, each other).

Osborn says he makes all 13 wines exactly the same way, including 20 months in barriques.

And he proves his point about McLaren Vale terroir because they’re all really different, and also very different from the mainstream perception of Australian Shiraz. Some are mushroomy, some are floral, some are peppery, some are bright and fruity.

This shouldn’t be surprising if you’ve tasted The Dead Arm. Earlier this year I judged at Critics Challenge with a lineup of top wine writers from around the country. The 2008 Dead Arm Shiraz  won Best of Class Shiraz, and if it was up to Bruce Schoenfeld and myself, it would have won Best In Show Red Wine. Even among a group of wines given platinum medals, it was the most interesting.

He’ll have to make a little less Dead Arm now, because he’s making about 200 cases of each of these 13 components. “The ’09 Dead Arm is going to run out way earlier,” he says. “Which is not a bad thing. We don’t want to have stock lying around.”

For example, Tyche’s Mustard Shiraz is very tannic, especially on the finish. It’s not pleasant to drink now.

“I have to use this like mustard in the [Dead Arm] blend,” he says. “I’ll be very interested to see how this does with age — whether I use more or less [in Dead Arm].”

The Other Side Shiraz, from 96-year-old vines, is also quite tannic, but tastes Bordeaux-like, with tobacco leaf notes.

Fruit Bat Shiraz, on limestone soils, is earthy and mushroomy, not at all fruit-driven. The Little Venice Shiraz comes from a vineyard touching Fruit Bat, but has clay soils. It tastes of bright raspberry, with a stony, minerally finish.

It’s hard to imagine any store or restaurant carrying all 13 of these wines, plus The Dead Arm. Tasting them with Osborn at a trade event in San Francisco, I imagined that five years from now, 10 years, 20 years, it will be even more interesting to journey to D’Arenberg’s cellars and pop all the corks again. Fortunately I’ve got a map.