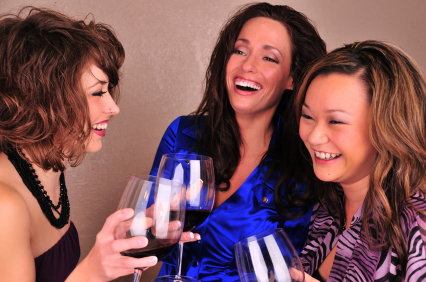 Are millennials illiterate? Uninterested in where wine comes from? Or are they wine’s Greatest Generation?

My working assumption has been the latter: that people in their 20s are willing to spend money on wines from anywhere, and are more concerned with drinking something interesting than impressing their peers.

But if you look at companies set up to sell wine to millennials — some created by millennials — their reading of that market makes it seem smug and uncurious and more interested in the app the wine is bought from than the bottle itself.

Sounds like Yellow Tail, but this wine comes from Napa Valley and costs $42.

Example 2: Naked Wines, one of the most innovative companies in the wine business. It sounds like crowdfunding, and celebrates the cult of the winemaker over terroir.

On the first page of Naked Wines, you’re encouraged to define yourself as a Wine Snob — with a picture of a smug, jowly baby boomer frowning through reading glasses — or a Social Drinker, with a picture of pretty young Caucasian professionals.

I was honest, I clicked on Wine Snob, and was told I couldn’t buy anything. So I lied and said “Social Drinker,” and the next page asks if I’d rather have my wine made by “Salesmen” or Talented winemakers.”

Then I’m asked if I want to “Pay more” or “get more.” Here is where I decided Naked Wines makes the color-coded, overpriced, mojito-flavored wines of Uproot seem smart. What’s the next question: “Would you rather have your genitals skewered with a rusty nail gun, or drink good red wine?”

I’m sure there are some millennials who read my first question in this column and have been waiting to write “U suk dmbss wine snb bomer shtfck.” You are the perfect customer for Naked Wines! But you’re still entirely too verbal for Uproot. Can you give me that insult in colors, please?

This type of marketing doesn’t jibe with millenial wine drinkers I see in San Francisco. They’re the folks who are happy to try the Croatian red while their parents insist on a Napa Chardonnay, preferably from a brand they’ve been buying for years. Millennials are the ones who order by the glass, partly because their total expenditure is less but also because they can try more than one type of wine.

But San Francisco is not mainstream America, and neither is Brooklyn. Somebody’s buying this stuff, and in the case of Naked Wines, they’re commenting on it. A lot.

This is the best thing about Naked Wines. There’s a built-in community of “social drinkers.” As with Yelp, there’s some signal and plenty of noise.

Example: a Lodi red wine blend called “Fair Angel” from winemaker Jim Olsen. Julia C. writes, “I thought it would be sweeter than it was.” Brandi H. counters that it’s “just sweet enough without being too sweet.” Kelly H. opines, “Sorry, this was just too sweet for me.” But Diana H. says, “I prefer a sweeter wine. My husband also likes sweet, and did not like this one.”

Nobody talks about Lodi or the grape varieties. Maybe that’s the way most people see wine.

Buyers took that wine more seriously — it costs nearly double — tasting things like chokecherry and raspberry leaf and “warm stables in the cool autumn.” There’s still that Yelp effect, though. Robert B.: “Nice full body.” Linda W.: “One of the boldest Pinot Noirs I have ever tasted.” Kent R.: “Light, bright and fresh.”

I love that the winemaker jumps in and responds to people who taste her wine. I love the community, and it’s really not surprising that one woman’s “bold” is another man’s “light.” I’ve sat at many tables with people who taste wine for a living and heard them disagree like this. And you gotta love that “archangels” from the company jump in and offer replacement bottles to people who don’t like what they bought.

What’s missing is simple: What are these wines? Where are the vineyards? What’s the climate like there?

Why are the wines the way they are?

The winemakers have some personality on the site. There are pictures, a very brief profile, and you can exchange comments. But the grapes … to be fair, we do know the region and the variety, and that’s a lot. But how did they get those grapes? Who grew them?

People learn, over time. Millennials currently spend less on wine overall than boomers because they have less money to spend. But they occasionally buy more expensive bottles than their parents did at the same age.

I ask too much of millennials. I want them to be wine’s Greatest Generation. I want them to reward the right people, the ones who spend all summer tending the vines, not the winemaker with the best profile pic.

But I ask too much. For years, boomers over-rewarded big companies that mass-produced and manipulated wines. Now millennials might over-reward companies that make a personal connection. It may be color-coded and sometimes non-verbal, but it’s still a lot of progress in one generation.