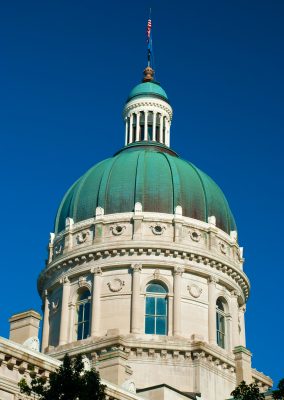 Making Reporting a Crime in Indiana

I ndiana hopes to join Utah in making it a crime to step foot on farm or industrial operations and take videos or photographs without written permission from the owner.  Indiana’s proposed law makes no exception for the Press and should be rejected.

Laws against photographing farm operations are a response to animal rights activists taking surveillance videos and posting them to highlight claims of animal abuse. Utah passed a its Agricultural Operation Interference statute in 2012. A similar statute died in Florida’s House (after passing in the Senate) in 2011.

Today, Indiana’s Senate Bill 373 passed out of Committee and goes to the State Senate for debate. The Bill makes it unlawful for a person to “knowingly or intentionally” enter property used for agricultural or industrial operations and take photographs or videos of the property, structures on the property, or agricultural or industrial operations on the property without written permission of the owner or an authorized representative. The Bill makes exceptions for law enforcement and other government officials and land surveyors. It makes no exception for the Press.

The Bill, if passed as law, would make it a crime for a journalist to go undercover into a farm, ranch, vineyard, or lumber operation, a mine or a manufacturer, to report on conditions. It would bar the Press from alerting people to abuses from animal cruelty to child labor law violations, from unsafe mines to unsafe food. The Press could not do its job, and people cannot be informed, when reporting becomes a crime. Reporters have gone undercover for well over a century, unearthing abuses and, through their stories, making the world safer for workers and consumers.

In the 19th Century Nellie Bly wrote “Ten Days in a Madhouse,” an undercover expose of an insane asylum. The horrors she exposed led to a grand jury investigation and massive new funding for care of the insane. At the turn of the 20th Century Sinclar Lewis’ book “The Jungle” was published, exposing the horrors of the American meat industry, after he spent 7 weeks working undercover in Chicago meatpacking plants.

Undercover journalism continued in the 1960s and beyond. In 1969 Günter Wallraff went undercover in factories and pharmaceutical companies in Germany to expose the plight of immigrant labor. A decade later Merle Linda Wolin went undercover to report on Los Angeles’ garment industry, uncovering labor law violations, unsafe work conditions, physical abuse, and an environment of terror based upon threats of deportation. In the 1990s Donal MacIntyre went undercover in the UK to report on safety issues in the canoeing and adventure industry, after four schoolchildren drowned in a canoeing accident. In just the last year two undercover reporters broke big stories. Tracie McMillan investigated the American food industry from farm and vineyard to the grocery shelves. She discovered a system based upon cheap labor, industrialized food, and government subsidies, a system that pumps out low-quality food and broken bodies. A Chinese journalist went undercover in a factory producing iPhone 5s. He identified terrible work conditions and poor pay in an expose that forced Apple to make changes in its production. All of these reporters, from Nellie Bly to that brave Chinese journalist, would be labeled criminals under S.B. 373.

One role of Indiana’s Legislature is the promotion and protection of Indiana business. But another, far more important role, is the promotion and protection of the interests of Indiana’s citizens. Those interests include not just safety of food, wine, and industrial products, safety for workers  and consumers, but also the right of the Press to explore Indiana’s farms, vineyards, and industries, and the right of Indiana’s citizens to know what happens before grapes reach the bottle or corn, the table.

Palate Press, a magazine that focuses on a farm product, wine, has the utmost respect for hardworking farmers everywhere. We also know that hardworking farmers, from Napa Valley to the American heartland, respect the freedoms that have opened new opportunities. One of the most important of those is Freedom of the Press, and it should not be infringed.

Senate Bill 373, and all similar proposed laws, should be rejected.