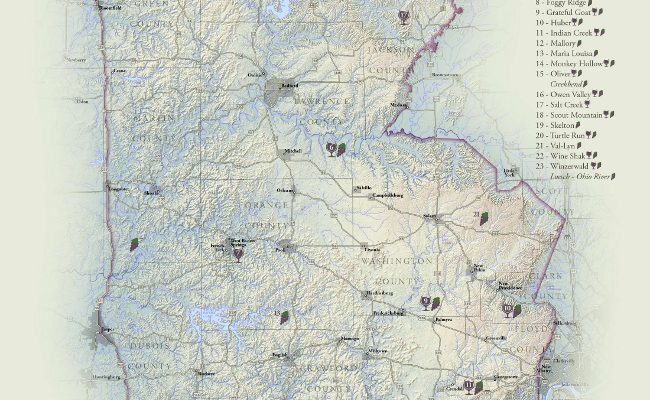 INDIANAPOLIS, IN. – Indiana winemakers believe validation and credibility come with the federal government’s designation of the Indiana Uplands in southeast Indiana as an American Viticulture Area (AVA).

Indiana Secretary of Agriculture Gina Sheets, members of Purdue University’s Wine and Grape team, along with representatives of Indiana’s nine Upland wineries made the announcement Tuesday at the Statehouse. Butler Winery owner and winemaker Jim Butler, pictured left, has pursued the designation for nearly 10 years. The U.S. Department of Treasury’s Alcohol  and Tobacco Tax and Trade Bureau granted the designation as the Indiana Uplands.

“I think what we want to develop now is when people see the name Indiana Uplands, it conjures up something in their minds about the area and the wines,” Butler said. “We want customers to have a real familiarity they can depend on knowing that they’re going to get a good wine.”

The 4800-square-mile Uplands AVA stretches from the Morgan-Monroe County line near Bloomington south to the Ohio River, a distance of more than 100 miles. The east-west boundaries run from Jasper in Dubois County to Knobstone Ridge near Starlight, overlooking the Ohio River Valley.

“This legitimizes the area as a grape growing region,” said Kathleen Oliver, right, Executive Vice President of Oliver Winery. Oliver is one of the Midwest’s largest wineries. “I think that’s something we already knew. We have something special in our topography with well-drained soils and a climate ideal for growing grapes. This raises the level of awareness that there is something unique about our region. It’s just like Napa or Sonoma, we are now something special.”

There are more than 200 AVAs in the United States including the Ohio River AVA shared by West Virginia, Ohio, Indiana and Kentucky. Butler said most southern Indiana wineries have never wanted to use the AVA designation which would force them to put “Ohio” on their Indiana-made wines.

But Bruce Bordelon, Purdue’s Viticulture Specialist, said it takes more than a designation or label to make the Uplands stand out. “Quality is always the goal whether it’s Michigan, Indiana, Ohio or Washington and California,” he said. “This is an affirmation that what we’re doing is successful and mainstream and good as any region in the world.”

The winemakers acknowledged the big step is using the AVA designation to push quality, increase tourism, and sell more wine. “The big marketing point is they’re going to be able to put Uplands AVA on their wine bottles,” said Jeanette Merritt, Marketing Director, Indiana Wines & Purdue Wine Grape Team. “When people go out to buy wine they are looking for those special designations. Having the Uplands designation on the bottle and being able to promote that is going to encourage people to buy those wines.”

Butler said it’s a process that could take decades, but the AVA designation is an important first step. Dan Adams, winemaker and owner of one of the Uplands’ smallest wineries, Winzerwald, said everyone from Oliver to his small operation benefits. “We have to get the word out and tell people we have unique qualities like a Napa or Bordeaux,” he said. “We’ll eventually achieve the same level of recognition that other areas have achieved. Some of those areas have had years, if not hundreds of years, head start on us.”

Howard W. Hewitt is a wine writer based in Crawfordsville. He writes an every other week newspaper column for 22 Midwestern papers reaching more than 300,000 homes monthly.  Read his wine blog at: www.redforme.blogspot.com