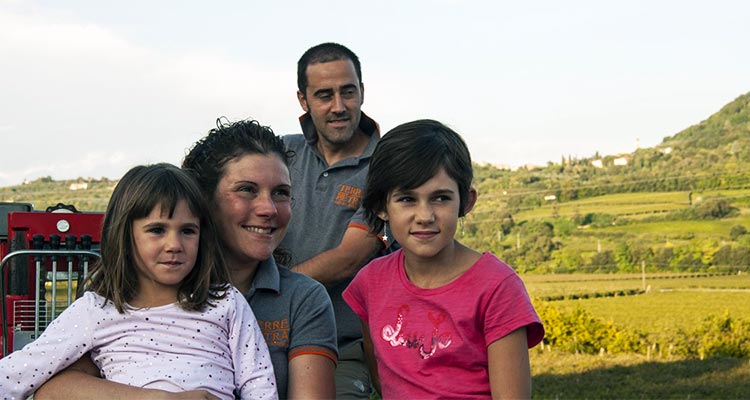 Laura Albertini, young owner of the small winery Terre di Pietra (mentioned in my recent column on this year’s Amarone tastings), passed away suddenly on the first of March, 2017. Married to Cristiano Saletti and the mother of two children, Anna and Alice (pictured above), Laura was just 36 years old.

With her energy, passion, and irresistible smile, Albertini won such respect and esteem in the wine industry that Terre di Pietra is considered one of the rising stars of the Valpolicella landscape.

Laura was an active member of FIVI, the Italian Federation of Independent Winegrowers. Her efforts were always focused on the production of grapes and wines that were respectful of their territory, as well as being pleasing and healthy, and clearly connected to the best traditions of Valpolicella.

In spite of her obvious love for the wine world and the local countryside, Laura struggled for many years with her father, because he absolutely did not want her to follow her dream of producing wine. Despite the fact that part of Laura’s childhood had been spent in the vineyards with him, he thought she would be better off as an accountant, working in an office.

Laura never gave up, and she finally had the chance to start her wine adventure, when – just after her marriage to Saletti in 2002 – her father-in-law gave the couple a small vineyard to cultivate, as well as a garage to use for vinification, Eventually they built a wine cellar, and in the following years found additional small rental vineyards to cultivate. With the initial help of consulting enologist Flavio Peroni, Laura and Cristiano soon began to produce their own wines. In 2011, they made their first wine with indigenous yeasts.

The winery’s name, Terre di Pietra (literally stony land), references the famous Lessina stone of Valpolicella. Each wine is named (in the local language) for a specific layer of that stone; another way Laura and Cristiano demonstrated their love for the region. From now on, unfortunately, Cristiano will have to carry on this love by himself.