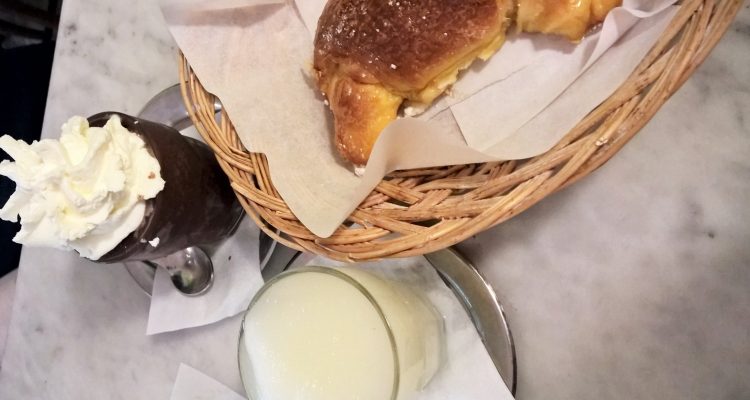 Eat on the street (and drink!) in Italy

One of the best parts of traveling in Italy is, without a doubt, the food and drink (mainly wine) that you find there. There are so many good restaurants everywhere in Italy you can choose where to go according to your taste – and your wallet of course. However, the best way to dive into the wine and food culture of any place is… eating while you are walking. Street food (and drink) are probably the most effective way to learn the authentic face of a people: “when in Rome, do as the Romans do,” as the popular Italian proverb says. And this is also true for every other village, town or region you get a chance to visit.

Although there are so many traditional street foods in Italy that it’s impossible to taste all of them, let me tell you about a few that I have sampled. Beginning in the capital city, I have memories of when I was a kid visiting my grandma, who lived in a crowded and popular neighborhood. I never missed a chance to savor the famous Roman supplì [soop-PLEE], small fried balls of rice filled with meat, peas and mozzarella. They are delicious, both cold and hot – but hot is more delectable because the heat melts the cheese, and the mozzarella gets deliciously thready. The supplì are generally not too big so you can eat several depending on how hungry you are. You can buy them in a grocery store or bar, but also from the many hawkers who either wander the streets or sell out of a small van or stall. And what would you drink, at this point? An interesting choice could be the grattachecca [graht-tah-CAKE-kah], a typical Roman drink. Despite its harsh-sounding name, it is simply grated ice with sugar and pieces of fresh fruits (cherries, peaches, melon, coconut) or an artisanal syrup (mint, strawberry, almonds). This very refreshing drink originated the past, when fridges did not exist and people used ice to preserve their food. The grattachecca drink is generally sold in kiosks, sometimes in bars. 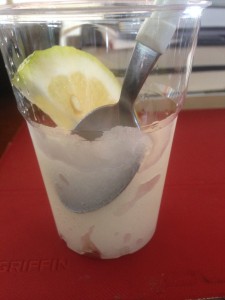 Speaking of ice, this was found in many region of Italy. In Sardinia, for example, an old tradition has recently come back into fashion: the sa carapigna (sah car-a-PEEN-ya), an artisanal product from the town of Aritzo. It’s the classic Sardinian sorbet, made with ice and lemon; its origin dates back to the 1600s, and it has been made with basically the same process ever since. In the past, this sorbet was made by a special producer called a carapignero, and there was no popular street festival without them and their sorbet. Nowadays, also due to either industrial production or new household tools for ice cream, there are very few carapigneri. However, re-discovering food traditions has become trendy, so some carapigneri (like Sebastiano Pranteddu, www.sacarapigna.eu) are coming back.

Are you unable to find a sa carapigna in Sardinia? No fear: let’s hop over to Sicily, where it’s much easier to get a granita. This is the legendary ice-based street drink of the island; you can find it everywhere. Probably the best example is found in Acireale. This town, well known for its baroque churches, started its own festival four years ago: the Nivarata, a great celebration of the granita Siciliana, where the most renowned Italian ice-cream makers compete to make the finest granita. Glasses are filled with this semi-liquid prepared with water, sugar and fruit juice or other flavorings. Favorite flavors include almonds, coffee, mulberry, pistachio, cocoa – and it can be made with or without cream. But if you want to taste the most authentic granita of Acireale, you have to ask for a granita made with the distinctive lemon of Mount Etna, the only one that ripens in summer: the Verdello, with its lovely yellow-green color and intense flavor. And if you want to behave like the locals, you have to have granita for breakfast, in a brioche!

For those who prefer savory tastes, the best Sicilian street food is arancino (ah-rahn-CHEE-no)(or arancina). It’s reminiscent of the Roman supplì, but it’s definitely much larger; it can be round or even cone-shaped like the nearby Etna volcano. Anyway, it’s made with rice stuffed with a lot of delicious ingredients like meat, butter, pistachio, cheese, vegetables, saffron, mushrooms. One word of advice: if you choose a cone-shaped arancino, grab it by the tip and begin to eat from the bottom, which makes it much easier to handle.

Leaving the islands and coming back in the mainland, another traditional street food is the delicious farinata, native to Liguria. It’s a round, very flat focaccia, made only with water, chickpea flour, olive oil and salt, carefully cooked in the large, traditional pan called testo in order to get it very crispy on the surface but still soft on top – a cooking method that requires a lot of practice.

Moving on to Tuscany, in Florence you can easily grab a taste of panino con il lampredotto, (bread with bovine offal), which is sold in street markets like in the central one at San Lorenzo.

In Marche, don’t miss the savory olive all’ascolana: they are very large olives, fried and stuffed with meat; they are great as appetizers, with a glass of sparkling Verdicchio.

In the Veneto, Venice is the country of cicheti [chee-KATE-ee], a local version of Spanish tapas. Not exactly a single dish, this is an ensemble of small pieces including (depending on your personal taste and level or hunger) hard boiled eggs with anchovies, small bits of veal with onions, little meatballs, mussels, pieces of salume, marinated anchovies, polenta, codfish… and much more. A constellation of tastes that you must enjoy – these are the rules – walking along the calli of Venice, or even better in a local Venetian tavern called bacaro. Here the cicheti are always served with wine. Not too much: just a “shadow” (glass) of it – as the Venetians say, un’ombra de vin – in order to keep on enjoying food, wine and conversation…