Dolcetto in Ovada Has Potential to Be More Than Pizza Wine

Fans of Adam Sandler (yes, they still exist) will tell you that his films are not meant to be profound; they’re meant to make you laugh. They’re easily forgotten, but can provide a pleasant distraction for a short while. Fans of Dan Brown (I think they still exist) tend to concede that his books are meant to offer quick, easy reading, entertainment that doesn’t probe too deeply. 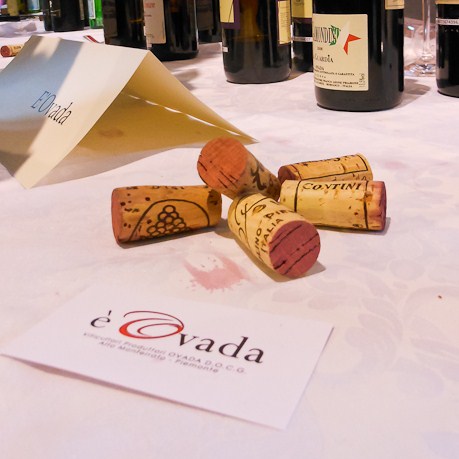 What is wrong, then, with the notion of a simple wine? Why not happily accept that some wines are meant for contemplation-free consumption—lunch wines, if you like—that don’t challenge us to think or work hard to understand them?

For generations, this has been the role of dolcetto. The grape simply lacks the make-up of its local neighbors in Piedmont, nebbiolo and barbera. The dolcetto grape produces low-acid, moderately tannic wines that drink pleasantly for a few years, pairing with pizza and similar fare.

Five years ago in the New York Times, Eric Asimov praised dolcetto while highlighting its limitations: “It’s a delight, but not a demanding one; light verse rather than an epic. No need to chew it over. Immediate pleasure is the goal; it doesn’t require appreciation.”

But what if Dan Brown’s next book was something entirely new and complex, a piece of literature so impressive that you could hardly believe the source? Would you downgrade your assessment of it due to the author’s previous body of work?

I have no problem with dolcetto-as-pizza-wine. But in a small commune called Ovada, a group of winemakers is trying to convince the world that there is something magical in the DNA of this grape, something that has never been allowed to shine. Until now.

Here is their argument.

Tomaso Armento, co-owner of Forti del Vento (one of the wineries in Ovada), admits that he can become incensed when discussing dolcetto. This otherwise-cheerful Italian winemaker has devoted his life to making dolcetto, and he constantly hears pejorative declarations about his beloved grape:

“Why not just focus on Nebbiolo?”

These comments drive Tomaso nuts. “I want to ask people to give our wines a chance,” he tells me during a tasting at the European Wine Bloggers Conference in Brescia, Italy, east of Milan. “But I just get angry when they give up before trying. I become like a bull. I have to calm down.”

Before we taste his wines, I want to understand why Tomaso does not agree with the general view of dolcetto. I want to understand why he can’t accept it as a pizza wine, a lunch wine, a simple wine.  He explains, “Most producers only plant dolcetto where there is room to plant it.” And he raises another good point: The greatest parcels of land in the Langhe are reserved for nebbiolo. Dolcetto, Tomaso says, “is there for producers to make some extra cash.” Hardly the kind of approach that might lead to something special.

His land in Ovada is southeast of the prime parcels for the production of barolo and barbaresco, and Tomaso admits, “We do not have the right climate to produce nebbiolo.” Then he smiles. “But it is right for dolcetto, and so our best hills are entirely dedicated to dolcetto.”

All the same, Tomaso does not dispute the value of dolcetto as lunch wine. “If you don’t dedicate some special vines, you won’t get a special wine,” he says. “So there is a great alternative. You can make a special nebbiolo, and make a simple dolcetto to complement it. I understand that.” That style of dolcetto dominates the market, with Ovada and Dogliani producing small amounts of wine compared to the several dozen other locales that offer simple Dolcetti.

Only in Dogliani (a short drive west) does dolcetto receive similar first-class status. It has led to a breakthrough; both Dolcetto di Dogliani and Dolcetto d’Ovada have received DOCG status, earning it a place among more ostensibly serious Italian wines.

As we get around to tasting wines from five producers of Dolcetto d’Ovada, Tomaso smiles again. “If you make dolcetto in the right place you can get to dreaming,” he says in his good-but-occasionally-bumpy English. But, he emphasizes, “Dolcetto is not less than Nebbiolo.”

Forti del Vento, Tomaso’s winery, produces roughly a thousand cases of dolcetto annually. The 2008 is unlike the many other versions of dolcetto I’ve tasted. It is structured, with tannins that are much more substantial than dolcetto tends to show—and in fact the tannins are almost overbearing. Brett Jones, a well traveled British wine writer, is tasting alongside us. He nods. “These are quite impressive,” Brett says, also focusing on the layered structure.  He agrees that, “You don’t see very much Dolcetto like this.”

What about the acidity? One of the criticisms of dolcetto is that it lacks acidity, and therefore falls apart with much time in the bottle. These Ovada wines show much more backbone than their simpler cousins. “Location!” Tomaso exclaims. “It is about finding the proper place for the grape.” It’s a convenient explanation, but perhaps it’s true; regardless, you wouldn’t confuse these dolcetti for higher-acid wines like barbera, but they are not fat or flabby.

There is some variation among the five wines that Tomaso has presented, but it’s fair to say that, as a group, they lack the occasionally off-putting bitterness that can plague dolcetto. The fruit is concentrated but not overripe, and Tomaso has an answer for that as well. “Yields can be very high for many producers,” he says. “But the yield for great dolcetto is just half the yield of nebbiolo.” Instead of the clunky bitterness, these dolcetti show a kind of loamy earth character that meshes with their dark fruit nicely.

The challenge is trying to determine what kind of longevity this wine will have. There is almost no track record, so it’s all conjecture. Pulling back from his previous pronouncement, Tomaso shrugs and says, “Nobody can prove that dolcetto can be as good as nebbiolo [yet]. I feel it could. I just hope to demonstrate that before I die.”

The future of Dolcetto

If winemakers like Tomaso Armento are going to succeed in convincing wine consumers to take their dolcetto seriously, they’ll have to reach more markets. For now, Dolcetto d’Ovada wines are mainly available in a handful of  New York stores according to WineSearcher.com, though Europeans have a slightly easier time tracking it down. Dolcetto di Dogliani now appears in a dozen U.S. cities.

The good news for consumers is that price hasn’t moved—yet. You can get a bottle for as little as $13, and only a few bottles reach the $20 mark. Tomaso concedes that this could eventually change.

“The market is truly under-priced,” he says, explaining that with such low yields, many producers are taking a financial hit for now. “Simple wines are easier to make than structured ones.”

At the current prices, I find these dolcetti to be strong values. Dolcetto’s reputation is unlikely to change immediately because the vast majority of it is produced by wineries seeking to offer simple wines. Pizza wines. Lunch wines. The world needs these wines, and one type of dolcetto fits the role snugly.

But Tomaso and his ilk will continue working to offer the exception, not the rule. At dinner in Brescia, he unveils a 20-year-old dolcetto, from  the cellar of a neighbor in Ovada. I taste it alongside Magnus Reuterdahl, a Swedish writer who has come for the conference. “This is dolcetto?” Magnus asks after slowly inhaling. “This is something new. Something special.” Tomaso has earned at least one convert. There will have to be many more before he’s proven right.