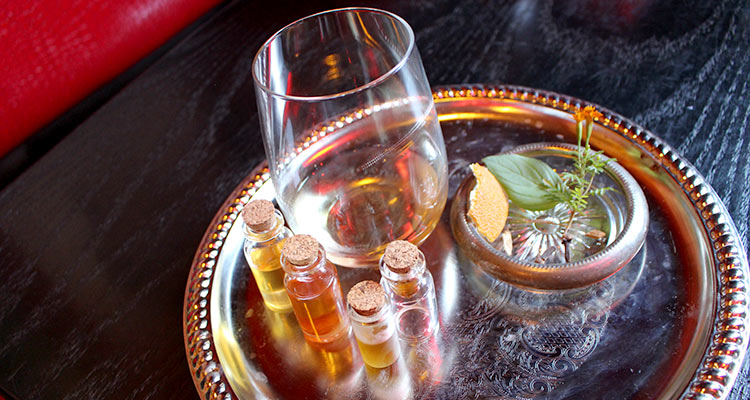 Have you tried them yet?

Researching vermouth for my next book, I found not only a groundswell of popularity for artisanal versions, but also a whole DIY vermouth movement. Not so suprising, I guess, considering the current trend of make-your own cocktails. But I was somewhat startled to also find Vermouth classes going on everywhere, like it’s the next party game. (And why not?)

All over the country, I’ve been finding recipes with spices and herbs recommended for different styles of vermouth. Traditionally, the popular cocktail ingredient is made with fortified wine – though some bars and wine shops now use a non-fortified white as a base in their seminars.

The Ladies Room in Chicago takes this idea even further with their DIY “Vermouth” cocktail, which starts as a glass of white wine on a tray, accompanied by a selection of tinctures and herbs. (The “high-proof tinctures” fortify the wine.) The lounge likens their vermouth experience ($18) to a “’Create-Your-Own Adventure” novel, where each customer gets full control over the drink’s flavor profile…

According to bar manager Annie Beeb-Tron (who is also bar manager of neighbor Fat Rice), “Much of the original inspiration came from our own tinkering and Chef Abraham Conlon’s early development of house made spirits for a beverage program. When Chef conceived the original vermouth idea, it was an exciting challenge for me to create a familiar vermouth flavor profile through the unique culinary ingredients we had in house, using items like galangal, matsutake mushrooms and more.”

Cocktail devotees and mixologists have been making their own infusions for years now. Maybe it’s time for the rest of us to try?

When I first encountered this chilled red wine craze earlier in the summer, I was skeptical. Was it perhaps chilled for the same reason hazelnut flavoring gets added to coffee: to camouflage inferior quality? Or maybe this trend was piggy-backing on the current rosé craze (which, after all, is also made with red grapes).

Then I remembered my wine history. Consuming a red lightly chilled (at 60-65°F or 15-18° C) — a.k.a. cellar temperature — is actually a return to basics as far as most connoisseurs are concerned.

It used to be that each new vintage was consumed as soon as it was fermented. (Which is why we celebrate Beaujolais Nouveau every November.) Wines weren’t made to be aged or chilled: they were made for drinking. Starting in the fall and winter, when the weather was cold, and so were people’s homes.

Most red wines are served overly warm in today’s households and restaurants, which can affect the delicate components that create aromatic and flavor nuances. Thus, keeping reds a little colder than current “room temperature” often makes for a better all-around experience.

After some PR people sent samples of chillable reds, I started madly chilling other bottles before trying them. Unsurprisingly, fruitier wines generally did better in this state. For instance, a Santa Julia Tintillo (around $12, from Familia Zuccardi in Argentina)  — made with 50% malbec and 50% bonarda — showed off big, spicy dark red aromas and a hearty, fruity and mouth-filling palate, even slightly cold.

Another South American, the 2015 Red Blend (around $15) from Susana Balbo’s Crios line, also passed the light chill test. Aside from wishing I could have waited another six months for all of this wine’s elements to perfectly integrate, the temperature adjustment accentuated touches of vintage leather, a big mouthfeel with luscious blackberry fruit, plus good body and acidity. It had some complexity and was very nicely balanced.

The restrained, oakier reds did not do as well colder, including a 2015 Rafael Valpolicella Classico Superiore (about $15; chilling had been recommended) and a limited-release bottle of 2016 John Duval Grenache (around $60) from Barossa in Australia, which, to be fair, did not recommend chilling.

I encourage you to experiment with chilling reds. Don’t go too cold, though: from room temperature, start with an hour in the refridgerator and adjust from there. For those who use a wine fridge or cooler — which is generally around 50°F or 10°C — don’t let it warm up more than a few minutes before serving. (If the wine doesn’t seem to open up, you can always wait a bit.) And if it starts to get too warm on the dinner table, chill it down again briefly. This may come as a shock, but it’s OK to put a red wine into an ice bucket (gasp!) for a few minutes.

Spirits lovers are probably already aware that many of the finest spirits are aged in (fortified) wine barrels: Scotch in used sherry barrels, Bourbon in port barrels, etc.

But now table wines are being aged in whiskey barrels. Not in new American oak barrels of the same type used to age Bourbon, but in the actual barrels where Bourbon has been aged.

Mainly attracted by the squat, old-fashioned whiskey bottle shape, I recently sampled Cooper & Thief’s 2014 Red Wine Blend, made with grapes specified only as “California:” 38% merlot, 37% syrah, 11% zinfandel, 7% petite sirah, 4% cabernet sauvignon and a mysterious 3% “other red blenders.” The bottle reminds me of Port – and that’s what seems to be inside, too. Nearly as high in alcohol, it’s a confection of dark-red fruit aromas from the opening moment. The wine itself is “dark and jammy” as the tasting notes say: big, rich and sweet. I have always loved Port…