Creating a New Breed of Vine with Randall Grahm

Can you imagine using a jeweler’s eyepiece and tweezers to pull the male organs off a grapevine?

Randall Grahm can. It’s a patient task, but he’s doing it because he’s impatient. 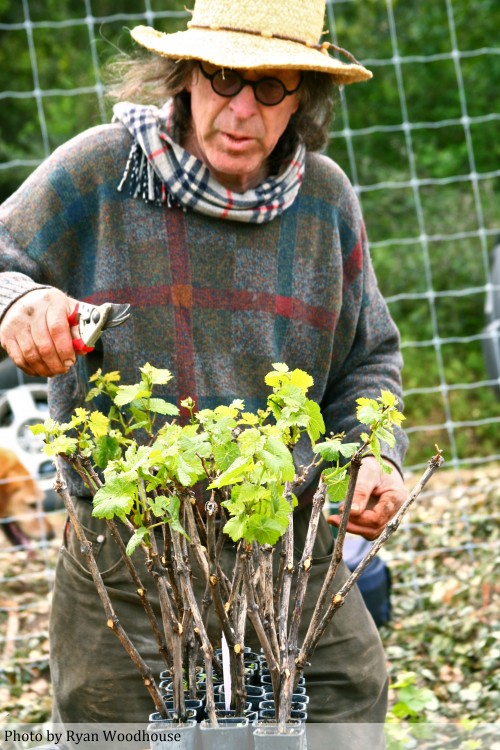 The idea is to create entirely new, random types of grapes. The reason is that Grahm, 57, doesn’t want to wait decades to create a terroir-driven wine—the kind of soulful, balanced, site-specific wine made by French vignerons whose families have owned their vineyards for generations. “I think this is how you come up with a wine of terroir in a single lifetime,” Grahm says. “Alternatively, you could start a monastic order and wait 300 years.”

Despite his fame and success in the wine industry, Grahm has not had control of his grapes for most of his career, since the loss of his vineyard to Pierce’s Disease in 1994.

A recent 25-year retrospective tasting of his flagship Le Cigare Volant brought that point home. His very first wines in the 1980s, made mainly from grapes from some old grenache vines he found near Gilroy, were the best. As he expanded production to meet demand in the mid ’90s, he lost access to some good vineyards, had to buy from others that weren’t up to snuff, and the quality went downhill for a few years. It has rebounded, but still hasn’t reached the heights of the first few vintages.

“I seemed to forget, at least for a while, the most important winemaking lesson: one must begin with exemplary grapes,” Grahm says.

Grahm finally bought a new vineyard in San Juan Bautista last year. But a new vineyard takes at least four years to produce any crop at all, and could take decades before it produces the kind of complex, site-specific wine Grahm wants to make.

Hence the vine neutering, which Grahm wouldn’t actually do himself. “This is why God created interns,” he said.

The theory is this: Grahm will plant a special castrati-to-be group of Rhône varieties, including grenache, mourvedre, cinsaut, syrah, and possibly others that he believes are suited to his new vineyard. “The vines already have an affinity for each other,” Grahm said, because they are frequently grown together in the Rhône valley, and their fruit is often blended.

Then vineyard workers will rip their stamens off and enclose the vines in plastic bags. They will also collect pollen from other, non-emasculated vines and throw it in the bags. These vines will thus be pollinated by other vine types and produce seeds. Grahm (or his God-sent interns) will plant the seeds.

Just as with humans, every grapevine grown from seeds is unique, with half the DNA from each parent. If a syrah vine fertilizes another syrah vine, you get syrah—a new clone perhaps, but syrah just the same.

But if a pinot noir vine fertilizes a cinsaut vine, then you might get pinotage, which is exactly what happened in South Africa in the 1920s. And that’s a mixed blessing: pinotage grows well in South Africa, but the wine made from it often smells like burnt rubber.

This is completely unlike the way wine grapevines are normally grown, because few grape growers want to leave their future to chance. Instead, they physically graft a desirable clone onto an existing root, cutting into it and tying the small bud and the larger root together. In this way, most vineyards have acres of the same clone of the same grape. It’s monoculture, but it’s predictable, which is a virtue if you have loans to pay off.

Grahm is not the only Californian trying to grow unique grapevines from seeds: Sashi Moorman is growing 8,000 pinot noir vines from seeds in Santa Barbara County.

But unlike Moorman’s experiment, Grahm will have all sorts of new grapes. Some may make great wines; others may not be drinkable. He has set his workers up for years of vigilance, because the new vines under the soil will sprout growth every year that he may not want. “I plan to spend a lifetime on this,” Grahm said. “One of the things that keeps me up at night is thinking, you’ve got a vineyard and a human being. What can a human being add?”

It’s also important to note that Grahm’s new vines will grow their own roots into the soil, rather than being grafted onto roots chosen for resistance to the worst scourge of the wine industry, the vine-killing root louse phylloxera. This pest nearly wiped out every vineyard in France in the 1800s, and is still a threat that must be considered by almost every grape grower in the world.

For a guy who lost his beloved vineyard to one plague, it’s surprising to see him going unprotected against another. “This is not safe winemaking,” Grahm said. “I have no idea what’s going to happen.”

On the positive side, Grahm could create the next cabernet sauvignon, which was a love child that naturally occurred in French vineyards between cabernet franc and sauvignon blanc.

The problem is, he might not know it. Under his plan, he’ll plant all the seeds that result from his project—remember, they’re all different. He plans to combine the fruit from them into one field blend, which could be one of the world’s most interesting wines, undrinkable swill, or anything in between. 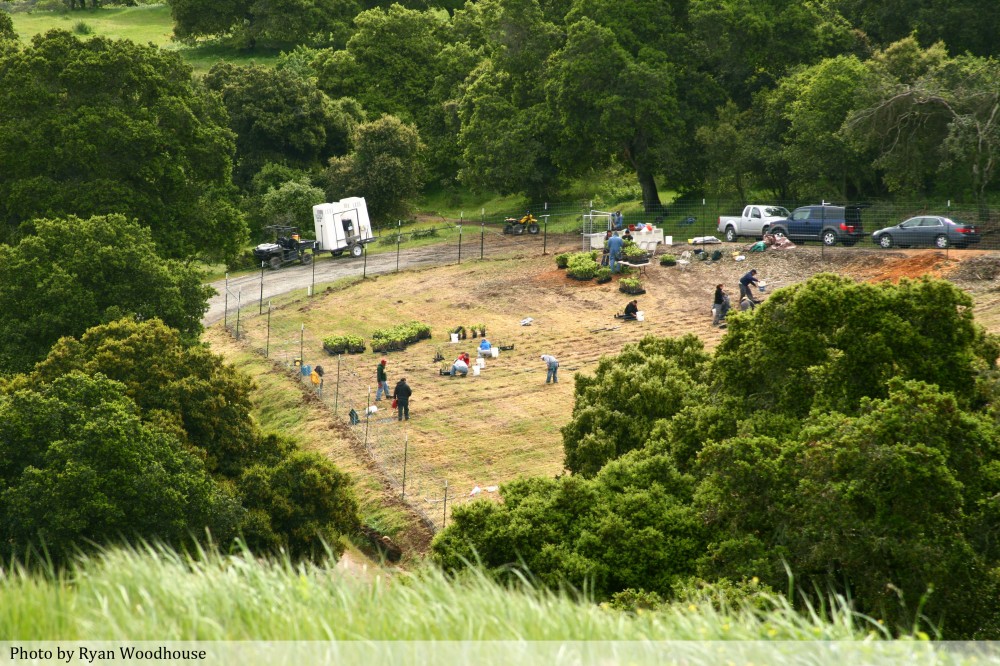 “The assumption is that every individual vine would be less than the original syrah, but between the whole of it, we’ll have a synergy,” Grahm said. “Somewhere in your vineyard is a genius grape, but you won’t know where it is. This is enriching the genetic repository.”

I asked Grahm if it felt like playing God, and it was the only question he fielded over the course of a 6-course, 7-hour, 30-wine dinner that he seemed taken aback by.

In fact, Grahm is letting randomness choose. If you want a stark visual image, it’s what vineyards in the Rhône Valley might become a few hundred years after mankind is gone. But in that case, we would never be able to taste the wine.

Grahm hopes to have some samples to drink within this decade, God and interns willing.