Buttery bacteria: Malolactic fermentation and you

Have you ever tasted a wine with a big buttered popcorn aroma?  Have you ever wondered how in the world a product made from grape juice could smell like a movie theater?  It turns out that bacteria can be responsible for this aroma and many other important wine qualities.

Wine cannot exist without the contributions of Saccharomyces cerevisiae, known in less scientific circles as yeast. Sure, these microorganisms convert sugars in grape juice to alcohol, but they also do much more. During fermentation, enzymes in yeast create fruity esters and liberate other trapped aroma compounds, turning plain old juice into a beverage resplendent with complex aromas and flavors. However, in many styles of wine, another important microorganism plays a key role.

You may or may not have heard of Oenococcus oeni (Leuconostoc oenos if you’re old school [Dicks et al., Int. J. Syst. Bacteriol., 1995]), but chances are you have had a wine where its influence was critical. Buttery chardonnay comes to mind, as does (slightly less obviously) just about every red wine. Oenococcus is one of the key bacteria responsible for malolactic fermentation. This secondary fermentation of wine has many purposes, which I’ll outline below, including reduction in perceived acidity, change in mouthfeel, and contribution of interesting flavors and aromas to wine.

Malolactic fermentation (MLF) often occurs after alcoholic (or primary) fermentation has been completed. It is caused by the growth of malolactic bacteria in wine. Most spoilage organisms are unable to grow in wine (due to factors like high ethanol content, low pH, high acidity, and low nutrient content), but malolactic bacteria can grow in these harsh conditions by feeding on the wine’s acid. Malolactic bacteria are present in the environment and MLF can occur spontaneously (just as ambient yeasts can cause spontaneous alcoholic fermentation). However, MLF can be very hard to control, and in some cases difficult to start, so modern winemakers often inoculate with commercially-prepared cultures of Oenococcus, just as many inoculate with commercial yeasts. Even when inoculated, MLF can still be troublesome and time-consuming. Depending on weather and storage conditions, for example, it may not finish until spring!

The name “malolactic” comes from what can be considered the primary function of these bacteria: conversion of malic acid in wine to lactic acid. Malic acid is one of the two major acids found in wine (the other is tartaric acid). It is also the primary acid component of apples (Latin: mālum, apple) and is very tart. For an example of its tartness, try a Warheads candy (these explosive sour candies are lightly coated with powdered malic acid). Lactic acid (the main acid in fermented dairy products like yogurt, [Latin: lac, lact-, milk]), is much less tart by weight. Chemically speaking, this is because malic acid has two acidic protons where lactic acid only has one, so it’s like malic has double the acidity. Essentially, malic acid is sharper and more acidic than lactic. When malolactic bacteria eat malic acid, the products are lactic acid and carbon dioxide. (The reaction is shown below.)

You won’t find malolactic fermentation done in many Rieslings, for example, because their acidity is often the core of their structure, but you’ll often find it done in Champagne, since grapes there are harvested with very high acidity. The decrease in perceived acidity leads to a wine with a “softer” palate, altering the overall mouthfeel.

One of the three main effects of MLF on a wine’s aroma is the the contribution of a buttery smell. This hallmark of malolactic fermentation is due to the aromatic compound diacetyl. If you want to know what diacetyl smells like, pop up some microwave popcorn. It’s the main component of artificial butter flavoring. Different fermentation conditions, such as the presence of small amounts of oxygen (Ramos et al., Appl. Environ. Microbol., 1994), can encourage or limit diacetyl production to tailor the desired amount of buttery aroma. I should note that yeast can also produce diacetyl, and that its presence does not necessarily imply that MLF has occurred (Martineau et al., Amer. J. Enol. Vit., 1995). Diacetyl may also lead to a perception of a “creamy” mouthfeel, since it reminds the taster of cream or butter. (Note: I mentioned above that MLF occurs in many red wines, but the buttery aroma is not often present in reds. This is because red wine tends to be more aromatically complex, resulting in a greater masking of diacetyl in the bouquet.)

Recent research indicates that the aroma contributions of MLF also go beyond diacetyl. Enzymes called glucosidases, produced by the malolactic bacteria, can free up “bound” aroma compounds trapped in wine (Ugliano et al., J. Ag. Food Chem., 2003). Many aroma compounds are found in wine in a glycosylated state (that is, stuck to a molecule of sugar). This makes normally volatile aroma-active compounds stay in the wine and out of our noses. Glycosidases effectively cut the sugar groups away from the active aroma compounds, allowing them to escape into the gas phase (the head space of the glass) and into the nose.

Finally, MLF can lead to degradation of acetaldehyde, a wine component that is the result of the oxidation of ethanol. The grassy, nutty aroma of acetaldehyde may be welcome in oxidized wines like port or oloroso sherry, but in most wines its presence is considered a fault. In addition, acetaldehyde in wine binds very tightly to sulfites added as an antioxidant/preservative. Therefore, increased acetaldehyde content in wine requires the addition of additional sulfites. Thus, wines that undergo malolactic fermentation require the addition of smaller amounts of sulfites to achieve the same microbiological stability.

A hot topic in the winemaking world recently is the production of biogenic amines. These compounds (e.g., histamine and tyramine) are a natural product of the fermentation process but can be harmful to sensitive individuals, resulting in headaches, redness, and other unpleasant reactions. Most commercial strains of malolactic bacteria have been selected for low biogenic amine production, but spontaneous MLF (especially if it involves Lactobacillus or Pediococcus) can result in higher production of these compounds.

I hope this overview has given you an idea of what’s actually going on in wine during malolactic fermentation, why it’s used, and how the wine world would be very different without the contributions of these heroic little bacteria. 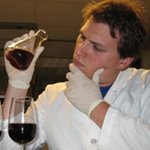 –Tom Mansell is a PhD candidate in chemical engineering at Cornell University in Ithaca, NY.  He is borderline obsessed with the science of wine and winemaking. His blog, Ithacork, focuses on Finger Lakes wines and always includes a “Science!” section, which gets down to technical details for the hardcore wine geek. Follow him on Twitter @mrmansell