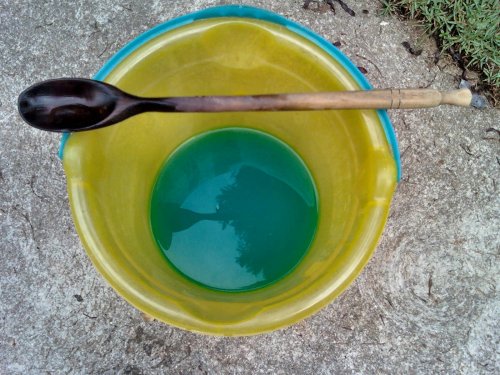 A silver bullet to replace copper in the vineyard?

When I first meet Dutch winemaker Stan Beurskens, I’ve already heard quite a bit about him. He’s one of very few Netherlands producers farming organically, he’s an interesting character, he likes to work with unusual grape varieties,and so forth. Our first exchange therefore baffles me:

Me: “I saw there is no organic certification on the bottles – are you in conversion?”

Stan: “No, we’re not organic anymore – we gave that up two years ago.”

After a bit more conversation, we get to the nub of it “The problem is that organic [certification] is just about regulation, not about philosophy. The regulations were getting in the way.”  In fact, Beurskens is tackling one of the organic grower’s holy grails at his Wijngaard Sint Martinus estate in Limberg, South Netherlands – how to reduce or even eliminate the use of copper.

Copper, most usually applied as a copper sulphate contact spray (when mixed with lime it’s called “Bordeaux mixture”) is still the only effective non-synthetic treatment for downy mildew (peronospera) or powdery mildew (oidium). Both ailments are common in more northerly European winegrowing regions, or indeed anywhere with copious rain and humidity levels. It’s a thorn in the side for committed ecologists, as organic farming focuses on not putting anything noxious into the soil. Copper is admittedly used in decreasing quantities – EU legalization for organic producers now only permits an average of 6 kg per hectare per year, but there are still worries about it building up in the soil.

Mitigation against excess copper usage is hard work. Many committed organic growers confirm that lowering yields, and concentrating on meticulous vineyard management can reduce the chances of mildew setting in, but there’s no silver bullet. At Radikon, in Friuli Collio, Italy, experiments with propolis (bee glue) as a fungicide are under way. Everyone is looking for an alternative – organic proponents are probably sick of being taken to task for this one chink in the armour.

Beurskens has combined forces with a small number of North American viticulturists to pilot an innovative new solution – ozone. Ozone-enriched sprays (where oxygen molecules are split to transform from O2 to O3) have long been used for everything from cleaning swimming pools to disinfecting oak barrels in the winery. What’s new is the idea of spraying ozone onto vines, something which has been pioneered by fellow Dutchman Ernie Wilmink and his company Agriozein.

The theory is captivating, even if Beursken’s assertion that “it’s just water” is simplistic. Ozone is hugely oxidative, and capable of destroying the cell walls of bacteria within seconds. As such, it is a significantly more effective disinfectant than chlorine (hence the popularity with swimming pool owners). With a half-life of 25 mins, ozone reverts safely back to oxygen very swiftly, so there are no residues to worry about either.

What about the practice? Beurskens told me “It’s effective, but not on every grape variety” – and there are quite a few to worry about at Sint Martinus. Beurskens is committed to growing a number of newer crosses and hybrids, which he feels give his winery more of a unique selling position.  So amongst Pinot Noir and Cabernet Franc you’ll also find Monarch, Pinotin, Cabernet Cortis and Souvignier Gris to name just a few. Sharp-eyed readers will note that these new varieties are bred to be more disease-resistant on their own.

This may not yet be a perfect solution – the equipment to convert water into ozone isn’t cheap, and ozone’s volatility means the conversion process has to take place in the field – Agriozein sells a sprayer/ozonator unit at around $25,000. Concerns have also been voiced about potential leaf damage to the vines. 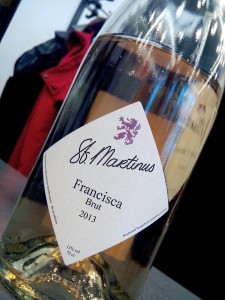 No discussion of new techniques would be complete without at least a brief review of the output, and Beursken’s wines seem to be building a local following. I tasted three bottles from his range, all of which were palatable and competently made, if not mindblowing. The pick of the bunch was the traditional method Francisca Brut, a rosé sparkler with nutty red fruit and a crisp finish.

Beursken has a realistic perspective on the Dutch wine industry’s status: “it’s like the UK was 10 years ago – no-one believed you could make good wine there, but you can”. I don’t doubt that with inquisitive, innovative minds like him, that potential will increasingly be realised – and if copper usage can be eradicated in the process, there’ll really be a reason to crack open the Francisca Brut and celebrate.