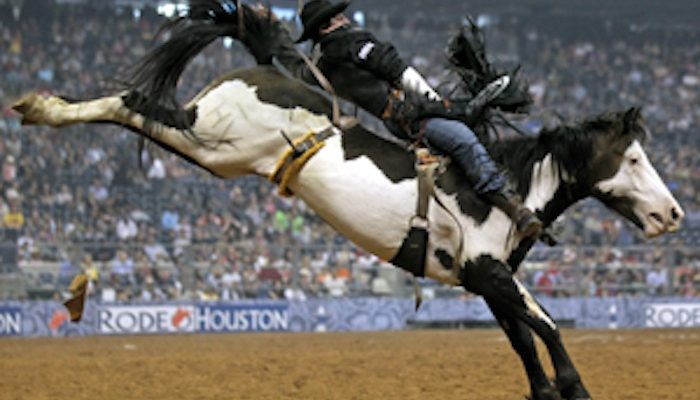 That one of the world’s biggest wine competitions is associated with a rodeo might come as a surprise.   The images of an oenophile studiously judging wine and one of a cowboy flailing atop a frantically bucking bronco across a dirt-laden corral are a bit discordant, but the fact that the annual Houston Livestock Show and Rodeo hosts one of the world’s largest wine competitions – just one of its several wine events – does actually make some sense.

Through the significant Livestock portion of “The Rodeo,” as the whole Livestock Show and Rodeo is known in the local vernacular, there is the connection to agriculture. This includes Texas grape growing and, by extension, wine-making.  But the makeup of the modern-day Rodeo attendee probably explains more of the rationale.  Introducing the inaugural event in 2004, the assistant general manager of the Rodeo was quoted in the Houston Chronicle about the first wine competition that “we hope to reach an expanded audience. This is a little different from our traditional livestock rodeo culture.”

A bridge between the Rodeo and the world of wine might be personified in one of the founders and the current vice-chairman of the wine competition, Charles M. Dalton, known as Bear.  Fitting the image of a stereotypical Texan, Dalton sports a full white beard, and is usually found wearing cowboy boots, often complemented with jeans and a cowboy hat, which is fitting, as he is an avid horseman. He also happens to be the longtime head wine buyer at Spec’s Liquor Stores, the huge Houston-based retailer, a renowned French wine expert, and the proprietor of the wine school at l’Alliance Française in Houston. 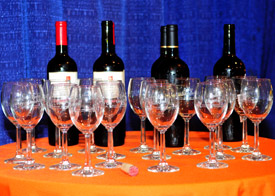 Dalton’s passions and expertise notwithstanding, the connection to wine might seem a little tenuous, but the bigness of whatever might be produced by the Rodeo would be a given. Everything is done in a big way at the Rodeo, which is held each late winter at the Reliant Stadium complex. The smallest of daily crowds push 60,000, with most well in excess of 100,000. The 2014 Rodeo officially ran from March 4 to March 23 and drew almost 2.5 million attendees (which does not include the more than a quarter million for the barbecue cook-off the weekend before). This is easily the largest livestock show and rodeo in the world.  So, if the Rodeo was going to hold a wine competition, it should be no surprise that it has become be one of the biggest around.  And, it is currently the fourth largest wine competition in the world in terms of wines entered for competition, with 2,505 wines entered for the 2014 event, following 2,884 in 2013. Sights are firmly set on becoming the largest in the world, according to Sam Ray, a longtime Houston wine professional involved with the Rodeo’s wine events.

The competition awards medals in eleven different categories.  Grand Champion Best of Show is judged to be the top wine at the competition. Following a rodeo naming convention, the Reserve Grand Champion Best of Show is the second place wine.  In a departure from most wine competitions – though in line with rodeo tradition – winners in each of the categories are awarded belt buckles, chaps and saddles, something especially enjoyed by the European wineries. The wine professionals who make up the twenty or so judging panels come from around the world and this year included two of the world’s 219 Master Sommeliers.

Wine is a much bigger part of the Rodeo than just the massive wine competition.  The Rodeo’s auction is the country’s fifth largest charity wine auction according to the Wine Spectator – it was the fourth largest the year before – raising more than $1.582 million.  In addition to the wine competition and the auction, there is also the Roundup and Best Bites event, a competition among restaurants featuring medal-winning wines that sold out its allotment of tickets to over 4,200 thirsty attendees at its most recent event in February.  Additionally, there is a wine garden open each day the Rodeo is in session that offers a number of seminars on wine. Over $600,000 worth of wine was sold at just at the wine garden during last year’s Rodeo season. All of these events are put together and operated by the four committees related to wine, which is staffed by about a thousand, noticeably enthusiastic volunteers.  Actually, everyone involved in the wine events is a volunteer.  The Rodeo itself if a 501(c)(3) charity that has raised over $300 million over the years for education, youth activities and agriculture.

From the outset wine might seem unusual at a rodeo, but at the Rodeo in Houston its successful pairing is evidenced by the huge size and corresponding popularity of its wine events.  As much most cities in the country today, maybe more, possibly because the city’s port is a big entry point for wine from Europe and, more so, the base for an excellent and wide-reaching wine retailer like Spec’s, Houstonians enjoy wine.  The Houston Livestock Show and Rodeo is just a natural expression of that.