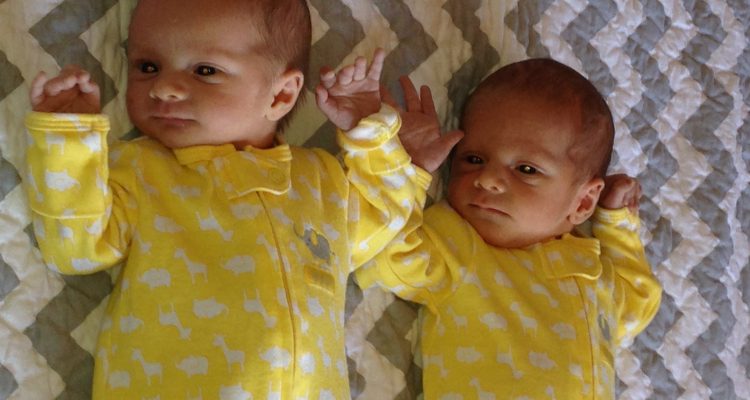 Wine, Oil and Family: the Three Stories of James Ontiveros

James Ontiveros met me at Pappy’s for breakfast. It’s a farm-country diner in Santa Maria Valley, California, where the omelets almost cover a whole plate. We spent a morning together, while his wife was overdue with twins, which would be their first children. They hadn’t chosen names and were planning to wing it upon seeing their faces.

James’ ancestor Juan Pacifico Ontiveros once owned all the land around Pappy’s, further than the eye can see, past the kale farms on the east side of US Highway 101 and the modern shopping center on the west side; past Bien Nacido Vineyards and Cambria Vineyards, where some of California’s best Pinot Noir and Chardonnay come from. Juan Pacifico Ontiveros received it all in a Mexican land grant in 1837. But the enormous Rancho Tepesquet was partitioned with each generation, and James’ family sold off the last bits during the Depression in the 1930s.

James Ontiveros, now 39, worked on his family’s former land as a sales and marketing guy for Bien Nacido Vineyards for a decade. But now he’s out on his own, with a project that exists only by the goodwill of a major oil company, which can tear down his house any day it chooses.

This is one of three good stories James Ontiveros told me on the morning before he became a father. I couldn’t decide which one to tell you: each could be 1000-word columns on their own. So I’ll tell you short versions in the order he told me.

Story #1: The Chinese solution
We didn’t talk business over breakfast; we ate chile verde and eggs and talked about whether fraternal twins like Ontiveros’ are as close as identical twins.

Both of us had recently read a book (“Unnatural Selection”) about the growing impact of sex selection in Asia in the 1980s and ’90s. There’s a whole generation of young men in China and Vietnam who have little chance of ever marrying, and the author pointed out that in history, eras with too many boys generally lead to wars and mayhem.

Ontiveros thinks we should consider bringing over these men to do farm labor. The US is one of the few countries in the world with more women than men, because when we do sex selection, we prefer girls. I don’t know if I could have gotten a whole story out of this idea, actually, but it did make for pleasant breakfast conjecture.

Story #2: Rock farming is everywhere, and it changes terroir
While we drove up to Ontiveros’ ranch, we passed a rock farm, aka a quarry. Have you ever noticed these before? Giant machine shovels with caterpillar treads; dusty air; nothing in sight but rocks. So many things we look at but don’t see.

Rock quarries are everywhere, all over the world, because every region needs gravel for its roads and it’s cheaper to mine it locally than to put rocks on a ship.

In most cases the rocks under a plot of land are worth more than any crop that can be grown on it. This may not be true at Domaine Romanée-Conti. But Ontiveros knows of a Russian River Valley Pinot Noir vineyard that was uprooted to get at the rocks beneath it. The vineyard owners thought they owned the land but didn’t own the mineral rights, which Ontiveros says is the case all over California, and will be the main plot point of Story #3.

Rock farming doesn’t destroy farmland. It takes it out of commission for a while. When the desirable rocks are removed — the big ones, most useful for construction — the remaining silty dirt is dumped back on the same plot of land, along with some topsoil. The land is farmed again.

Some crops actually do better on former rock farms, thanks to the big top layer of loose soil, which is why you’ve never heard of this before; it’s not environmental degradation, exactly. And we all need rocks.

Story #3: The Sword of Damocles in the price of oil 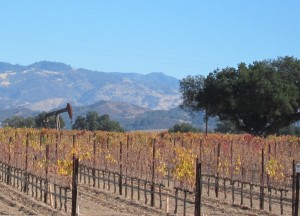 James Ontiveros’ grandfather Alexander lived in a small country house next to a 320-acre ranch owned by a childless family, the Brickeys. James’ father Mark, the oldest of seven kids, looked after the ranch for the Brickeys, and they gave him a 99-year lease. James has since bought an adjacent 80 acres. The Ontiveroses are landowners again.

But it’s not the fertile, misty, beautiful farmland around Pappy’s. It’s dry and dusty and studded with oil wells.

Decades before, an owner of the land sold the mineral rights. Ontiveros says this is common in California and is touched on in the film “There Will Be Blood.” He says California law is set up to protect mineral rights because the state’s founders were thirsty for oil. It’s the same reason a vineyard owner might not be able to stop a rock farmer from tearing up what he thinks is his land.

“They can come in and produce oil at any time, and they only have to pay damages,” Ontiveros says. “They can come right on top of my house” — built in the 1880s — “and drill.”

About now you think it’s going to be a story about evil oil companies. And Ontiveros has nothing but bad words for Shell Oil, which sold the rights to another company some years ago. But it’s more complicated than that.

The land had 126 oil wells on it in the 1970s, when Mark Ontiveros got the lease. But the oil underneath the ground isn’t very good quality: it’s sticky oil called heavy crude, used for making roads. When prices dropped after the 1970s oil crisis, so did oil companies’ interest in working the land. Mark Ontiveros bought a surface lease on a heavily worked oil field, not good for much else.

Times change. The oil companies did their required cleanup, using specialized microbes to eat leftover chemicals. The Ontiveroses spread some compost to grow grasses. They let cattle graze on that.

“That intermediate step, growing grass on it, gives us a quick look,” Ontiveros says. “Is it supporting vegetative growth? You wouldn’t want to spend money on a vineyard if it doesn’t.”
See, that’s the thing about crappy dusty, dry land, low on nutrients — often that’s exactly where you want to grow wine grapes.

“I want to take my property to its highest and best use,” Ontiveros says. “That looks to be vineyards.” 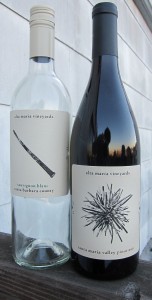 Little by little he has planted, but he doesn’t have a lot of money after buying the land. So he leased about 150 acres to the Wagner family of Caymus fame; they grow Chardonnay and Pinot Noir there, right next to an unused oil well. A well that could be reactivated at any time.

Ontiveros is not specifically worried about the new technique of fracking; he says the oil on this land is below 4000 feet, while the groundwater is much higher, at 700 to 1000 feet.

He’s just worried about the price of oil, and the price of grapes. He knows the Wagners’ wine can never be worth enough to prevent drilling if oil prices rise enough.
“It would be very hypocritical to go buy an oil field and decide to stop their operation,” he says. “We just want them to have second thoughts about the amount the damages would cost, as opposed to drilling on another piece of property.”

But, he says, “It’s like knowing you have cancer and going on to live your life.”

That’s a sad ending, and I don’t want that, so here’s how our conversation actually ended. We were tasting some of his wines under the Alta Maria label; I liked the Sauvignon Blanc ($18) and the Pinot Noir ($28). We were talking about destemming, which he’s against; total wine geek conversation. His cell phone kept ringing, but we were talking. As you can tell, our talk was interesting.

Suddenly James sat up straight and said, “I just realized that may be my wife, having a baby.”

We won’t be meeting for breakfast at Pappy’s again for a while, not without high chairs for Zane and Lauren Ontiveros.