The Dragon roars, sips and spits: Wine Production in China

In 2010, the Chinese takeover of the fine wine investment market was big news. Premium Bordeaux futures were selling like hot cakes, particularly off the back of the 2008 vintage (the Chinese symbol for the number 8 is considered to be very auspicious), and any fine wine merchant worth his or her salt was being drawn inexorably east. 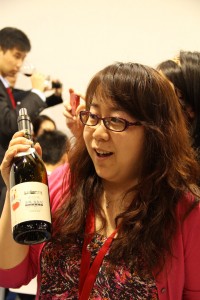 At this year’s ProWein (Europe’s most important wine trade event, held in Düsseldorf, Germany), a clutch of medium to large Chinese wineries were showing their wares. All were eager to find importers for the European market, despite the lack of any apparent imperative given the strong and rapidly expanding domestic market.

And what of the wines? Well, the examples I tasted were a mixed bunch. All were vinifed from international grape varieties, and many seemed like mediocre imitations of familiar western styles. Spicy, barrique-aged Cabernets abounded, as did brutally oaked and sometimes unpleasantly sweet Chardonnays. But there were positives as well – a fresh, simple stone-fruit laden Chardonnay from Danbian winery, and Great Wall’s rich, tannic Reserve Cabernet 2009.

Dou Lele, from the family-owned Xiangdu winery (who bottle most of their premium lines under under the “Champs d’Or” label), told me about the challenges of building a fine wine-brand in China. “We planted our own vines in 2002, when the winery was established – we wanted to focus on quality, not just shipping in cheap grapes from elsewhere, like so many of the new wineries do here”. Producing “only” 4,000,000 bottles a year, Xiangdu probably rates as a small producer in Chinese terms. That might not chime with European notions of artisanal production, but it’s worth remembering that Great Wall (China’s largest and most infamous producer) reportedly puts some 10 million cases of wine on the market each year.

Like so many wineries here, Xiangdu rely on foreign expertise, employing not just a French winemaker (almost de rigueur) but also an Australian vineyard manager. Three vintages of their reserve Cabernet “Les Champs d’Or” showed that the winery has yet to settle on its house style, as each was markedly different – almost deliberately so, Dou Lele confirmed. My favourite was the 2009, a spicy but fresh, medium bodied wine, with a sappy finish and plenty of ageing potential.

Labelling and branding often has more than a nod to classic European styles. Xiangdu are not content with just having a French moniker, but also market a premium wine under the name “Lafittle”. For as long as they can keep Bordelais lawyers off their backs, this suggestiveness seems to be working – at ProWein, I even heard a few German winebuyers specifically asking if they could taste the “Lafite”. Sadly Xiangdu were “ausverkauft”, on this occasion.

Ambition and (some) elegance

Drinking wine in China is as much a status symbol as a beverage, and the eye-watering pricing of many local brands seems to reflect this. Dou Lele told me that older vintages of their “Les Champs d’Or” are already fetching the equivalent of $260 per bottle on the secondary market. Retail prices in China for most of the wines mentioned in this article are at least $25. Noone seemed to be in any doubt that pricing would have to be different for exports, but clearly the prestige attached to foreign distribution is enough to sweeten the pill.

Imitation may be the sincerest form of flattery, but there are already suggestions that China could start forging its own vinous style. In amongst all the 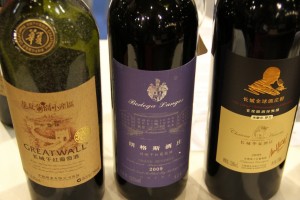 new French oak were some herbaceous, light renditions of Cabernet Franc and Syrah. The extreme climates in most Chinese wine producing regions – brutally hot days and cold nights –  seem to allow for plenty of elegance, at least in the hands of a skilled winemaker.

Many Chinese estates are owned by large corporates – some Chinese, some international. Swarovski owns Bodéga Langes, in Qinhuangdao province, and several of the most famous Bordeaux “brands” (Lafite amongst them) now have vineyard holdings in northern China. Homegrown production might not be consistently scaling the heights just yet, but when the dragon is ready to roar, no-one wants to miss out.