One of the great pleasures of wine exploration is not just in encountering something new, but something special. Italy is full of something new. An inquisitive consumer can find dozens of new grape varieties to explore, red and white, fat and thin, rich and ripping. That’s not a promise that these many somethings new will offer something special, but wine can’t be profound in every iteration, right?

But then there’s Gaglioppo, that rare combination of new and special. Unique and profound, if you prefer.

Head south to Calabria, the toe of Italy’s boot, and you’ll find mountains. This is not an immediately obvious landscape for high-quality grape growing. It’s hot and dry, better suited to scrub grasses and the vagaries of native vegetation.

Drive toward the coast, and you’ll discover a kind of barrier between the mountains and the sea. It’s not a large strip of land, but it’s ideal for the production of wine grapes. Rich soils, helpful breezes, abundant sunshine, and hard-working farms set the wine scene. These are not corporate outposts. These are families. Their hands are cracked and heavy from working the land for many years.

Gaglioppo, prounounced “gahl-YO-poh,” is the grape that flourishes in this special place. Most red wine grapes would be too easily cooked by the climate, producing wines that taste stewed and raisiny. This region requires a unique variety to handle the heat, offer structure, and provide non-fruit flavors to make sure the fruit character isn’t over-the-top. It turns out, Gaglioppo is that grape, much in the same way that Mourvedre finds its spiritual home in Bandol, near the sea, withstanding the heat while steadfastly refusing to produce stewy wines.

My first foray with Gaglioppo came in Italy during a large tasting of many varieties. A true Gaglioppo is soft in color, ruby but not black. This wine was strawberry-colored; I’ve seen darker roses. I approached it with my guard utterly down, and the structure of the wine knocked me back. A contradiction in terms, it showed what Jeremy Parzen refers to as Gaglioppo’s “unbearable lightness.” Parzen, a writer, translator, and wine list creator, loves to watch friends and colleagues drink Gaglioppo for the first time.
“It appears so simple, but it’s so gripping, a mystery,” he told me. “How can wine do that? That’s how you know you’re growing something in its natural home.”
Since that tasting, I’ve pursued Gaglioppo in an effort to learn more about its charms and its occasional pitfalls. This is not an easy wine to find; the best Gaglioppo is called Ciro in the same way that the best Cabernet Franc is called Chinon. It’s a regional name. You can find Ciro online, but not easily. Happily, Ciro is not expensive. You’ll find bottles in the low teens, with the high-end bottles between $25 and $50. I arranged a blind tasting with some friends and wine industry professionals whom had never tasted Gaglioppo. More on that in a moment.
Nebbiolo of the South?
First, I wanted to get the perspective of Gaglioppo’s most enthusiastic supporter. Paolo Librandi’s family makes some of the most highly regarded Ciro. Paolo is a polyglot who is happy to talk about Gaglioppo, seemingly at any time of day. Going back through our communications, I’m not sure when he sleeps.
“When people drink Gaglioppo for the first time, they should expect something precious, but very peculiar,” Paolo told me. “When you pour a Gaglioppo-based wine, the first thing you notice is a light color if it’s a real Gaglioppo. And so many people expect something light-tasting and light in structure, like a Schiava. But it’s not.”
So what is it? Paolo said, “If I had to describe it with a little fantasy? I would say that Gaglioppo is similar to something halfway between a young Nebbiolo and a Pinot Noir. But it’s neither of those things on their own.” 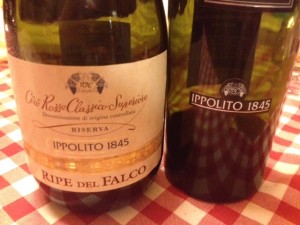 At several tastings, I watched respected professionals puzzle over what was in their glass. We tasted several young vintages of Librandi, and we tasted both young (2009) and older (1996, 1997) bottlings from the winery known as Ippolito 1845. The consistent refrain was that the young Ciro was well made, easy to enjoy but hard to pin down; there was some concern that the younger bottlings were darker and more international in style. The two wines from the 1990s were remarkable, haunting and changing.
At one tasting I sat next to Oskar Bynke, a Swede who serves as the marketing director for Hermann J. Wiemer, one of the flagship Finger Lakes wineries. Bynke is a regular member of a group that seeks out the unusual varities of the wine world. Here’s his take on atypical varieties: “Some wine shops are almost too geeky, trying to be too out there. But a lot of that stuff is not very good. We’ve had a lot of misses, wines from Switzerland and other such places.”
After tasting his first Gaglioppo, a 1996 Ripe del Falco from Ippolito 1845, Bynke was moved. Tasting blind, he instantly went to Italy, and remarked, “Perhaps Nebbiolo? If it’s Barolo, it’s probably 15 years old, and very good.” He couldn’t fully trust that guess, however, saying, “It’s maybe a little, little bit light on the palate, but not much, and on the nose, it’s wonderful. Easy to say Italy, but hard to say more.”
No wonder; he’d never come across a Ciro, let alone one with age. But Bynke left that tasting intrigued by the variety and its potential.
That’s not to say that all Ciro is exceptional. Younger Ciro can be pleasant but ordinary, especially the wines made in the international style. Some Gaglioppo is cut with Cabernet, and heavily oaked. This is a subject that’s been touched upon in depth by both Parzen (Do Bianchi) and Alfonso Cevola (On the Wine Trail in Italy). It’s hard to fault producers who want to make an unknown grape more recognizable to a world audience, but in doing so, there is a real chance that Gaglioppo will lose its character, its unbearable lightness.
Paolo Librandi believes Gaglioppo has struggled for two significant reasons: First, the quality has only improved in the past several decades, and second, it is not a region with a reputation for being friendly to tourists.
The Librandis still don’t get a lot of visitors.
But that could change. Paolo is willing to be patient with the wine market, and he believes the true nature of Gaglioppo will slowly build a following. For now, roughly 400,000 cases of Gaglioppo are produced each year — by all producers combined. If that seems like a lot, keep in mind that a big-but-not-huge California winery can produce half a million cases. There isn’t a lot of Gaglioppo to go around, but with demand rather low, it remains a great value. It’s often good, and on occasion, it’s achieves that rare combination of unique and profound.