For Palate Press: The online wine magazine‘s first grand tasting, we collected sixty different wines and a group of wine  bloggers and wine professionalsfrom the Indianapolis area, including: 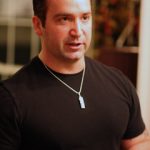 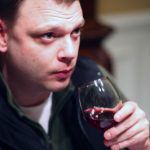 David Honig, Palate Press Publisher and author of 2 Days per Bottle and manager of The 89 Project and Brother, Can You Spare a Bottle?. 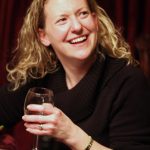 Ashley Lockwood, owner of Cork and Cracker, another fine wine store with two sites in Indianapolis.

Jennifer Verkamp, personal chef and proprietor of In Great Taste.

All the wines tasted were received as free media samples. We opened sixty different bottles and everybody was free to wander, write notes, and rate as they went along. We used a standard 20-point rating system, and only the wines receiving three or more relatively consistent ratings are included in the report, below. 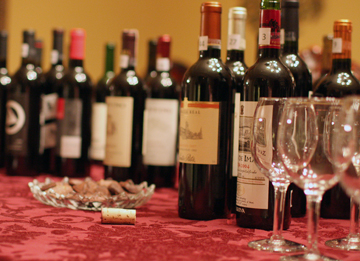 Whites were in one room, reds in another. Samples were heavy in Chardonnay and Sauvignon Blanc, but we also had a few Rieslings, from Germany and New York, Pinot Grigio, white blends, a Moscato, and one late harvest white from Long Island.

Reds were even more varied. We had about a dozen each of Zinfandel and Cabernet Sauvignon, along with Chianti, Pinot Noir, Primitivo, Bonardo, Merlot, and a Zweigelt from Austria, and others. 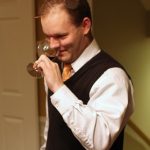 The star of the night was Montes Purple Angel 2006, an Chilean Carmenere, earning 17.5 out of 20. Chris Freeze, who gave it the lowest rating, 15.5, of the evening, wrote “None-too-subtle oak. very rich, naturally. Strong blueberry notes. Maybe too young; good acids on finish.” Louis Calli, who really does wear sweater vests, liked it more, and analyzed it less, writing, “One of the best Carmeneres available. If you don’t think so, we’re no longer friends.”

Olson Ogden Pinot Noir 2007, Sonoma Coast, was another favorite, coming in at 17 points. David Honig gave it the highest rating, 18, but had the benefit of trying it the second night, when it was showing mixed red fruit, sweet strawberries and tart rhubarb, sage, a bit of raisin, with dusty tannins and a long finish. 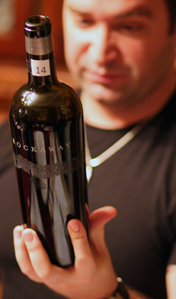 Everyting about the Brothers Ridge Cabernet Sauvignon 2006 was big, from the bottle to the 15.4% percent alcohol to the oak. Philip Van Deusen said, simply, “Intense. Oaky. big.” Chris Freeze said “A little overdone on the oak.” The final score was just a bit over 15. 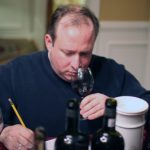 The Rockaway Cabernet Sauvignon 2006 fared better than its single vineyard brother, scoring 16 points. It was just as enormous as the Brothers Ridge but better balanced. Philip Van Deusen noted it was similar to the Brothers Ridge, but with “vanilla and mocha flavor, and less oak.” Ashley noted the size of the wine, too, writing “big up front fruit but enough earth/spice to make it interesting.”  The most negative review came from Louis, who found it “one sided.”

Bennett Lane Maximus 2006, a blend of primarily cabernet sauvignon plus some merlot and syrah, was a little lower in alcohol at 14.5%, and scored 16 points. It was full-bodied and well-balanced, but lacked the complexity to raise the numbers. 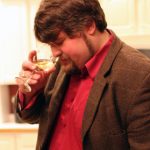 Zantho Zweigelt 2007, was probably the most interesting wine of the night. This unusual Austrian wine was really disconnected between nose and palate, but the palate showed surprising complexity. It showed berry fruit and candied cherries plus loads of pepper and spice. It scored 15 points from the panel.

There were a dozen different Sauvignon Blancs on the table. The favorite was Casa Silva Reserva Sauvignon Blanc 2008, with 16 points. Chris Freeze wrote “not overdone, nice chalkiness on palate.” David wrote “good sauv blanc with grapefruit, grassiness, good but not overwhelming acid and a nice finish.”

2007 Sean Minor Four Bears Pinot Noir was awarded 16 points. It was full-bodied, showing dark cherries and sage with a good finish. Howard noted it had a nice nose and “you get the terroir.”

The panel tried two different Zinfandels from M2 Vineyards, and one fared far better than the other. 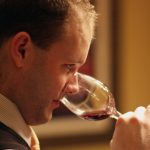 The first M2 wine, 2007 MS Vintners Zinfandel Artist Series, scored 14 points. The label said the alcohol was 15.3%, but I would not be surprised if it turned out a bit higher. Arthur wrote “medium ruby color, day bright, medium concentration with a nose of ripe ‘craizins,’ red berry compote, and drunken cherries. It is full bodied with ripe moderate tannins.”

The second M2 wine, 2007 M2 Vintners Zinfandel Old Vines, fared better at 16.5 points. Chris said it had a pleasant nose but “burnt fruit on palate.” Louis, on the other hand, said “Loved it. Big & fruity. Still, mantains a spicy and lush inegrity, not unlike myself.”

All the photographs are the work of Howard Hewitt.