Last week, the Smithsonian broke conceptual ground on a frozen “botanical garden,” storing samples of current plant life for future eventualities. I wish someone had thought to do the same for wine over the centuries, but freezing wasn’t invented early enough. Even the glass bottle wasn’t invented in time for us to know how ancient wine tasted, and the contents of old bottles always end up spoiled in any case. We just don’t know how wine tasted before about the mid-19th century. All we have are words, and words are notoriously unreliable. 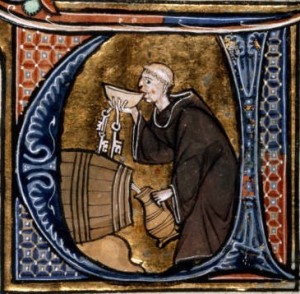 Look up ancient Greek mentions of the Dionysian beverage. Sweet wines earned high praise. “Sweet,” in fact, is the only wine descriptor that’s managed to stick with us through the past two millennia. The Greek philosophers weren’t much in to describing wine’s sensory properties – taste and smell were “lower” senses – but “sweet” wines were good fodder for drinking with your mates while waxing eloquent about democracy. John Locke and his 17th century enlightenment fellows would later complain of how few words English afforded them for describing flavors: they were “sweet” or “stinking.” Sweet was better. Promised lands flow with milk and honey, not sauerkraut. But Locke’s comment points to a problem. Between those limited options and everything the Europeans didn’t know about sanitation before the 19th century (and that’s being optimistic), it’s really hard to say how “sweet” wine might have tasted.

Of all the things we put in our mouths, sugar is the easiest one to like. Babies begin life with a natural preference for sweet and salty tastes and an aversion to bitter ones, which scientists tend to link to an evolutionary adaptation for consuming calorie- and mineral-rich foods and avoiding potentially poisonous plants. Babies even a few hours old will drink more water if it’s sweetened, will suck harder on a sugar-coated synthetic nipple, and even feel pain less severely if they’re simultaneously tasting something sweet. The human sweet tooth tones down in mid-adolescence; adults still like sweet, but they’ll prefer less intensely sweet sensations in controlled studies.

Everything else is an acquired taste, and we start acquiring from the residual flavors in breast milk and even in the womb, from flavor molecules that pass into amniotic fluid. If mom eats onions, baby will become accustomed to onions and appreciate eating onions when baby moves on to solid food, so the research says. One hypothesis about modern kids’ (and adults’) limited and sugar-forward food preferences implicates baby formula: maybe formula-fed babies turn into bigger kids who never learn to like the wide range of foods and flavors mom enjoyed.

Acclimation seems a potent explanation for sugar’s creep into “dry” table reds. Babies raised on bland, sweet formula or jarred baby food turn into kids with ketchup-and-tater tot palates turn into adults who couldn’t tell you why, but know they prefer the bastardized pad thai the local take-out place serves and drink Apothic Red. We all like candy, but ideally we also like things that aren’t and can appreciate the difference. That’s the crux of the matter: we learn what should and shouldn’t taste sweet. Toddlers given a sweetened food learn to prefer it, but won’t automatically prefer extra sugar in everything else they eat, too. Korean babies screw up their faces at their first taste of kimchi but happily wolf it down after they get used to it, and after they learn that everyone else already knows that the stuff is supposed to be yummy. I screwed up my face when I recently found that someone had put sugar in a pizza crust, of all things. There’s innate biology, and then there’s developmental plasticity: our ability to learn the difference between delicious kimchi and disgusting camembert – or the opposite, if you’re a French kid instead of a Korean one.

That’s how many of us learn to appreciate wine. Someone else tells us the stuff is supposed to be yummy, so we take their word for it until we get used to it and start believing that it really is yummy. (Or maybe your mom was hanging out with my mom drinking California zinfandel while she was breastfeeding.) But I suspect our growing inclination to drink jam-laced pinot noir has as much to do with what we’re learning not to like as with commercial food rapscallions loading everything that comes in a box with extra sugar and salt.

Meat preparations from the European middle ages routinely used sugar, honey, or fruit as a seasoning. Sugar addictions or no, a lot of us struggle with those sweet meat dishes or their cousins that persist in North African and Turkish cuisine, for example. Yet no one’s been inclined to accuse any of those folk of excess sugar consumption. Most didn’t eat that stuff every day, or ever; the medieval working man’s dinner was more likely a pottage of grains and half-wild bitter vegetables. Kings and emperors who could afford to eat richly every day could be notoriously fat when they led their armies from armchairs instead of the field; they were as bad off as we are and worse.

The modern sweet tooth isn’t new, but two things are: the availability of sweetness, and the many flavors modern food science is teaching us not to like. On the one hand, the cosmopolitan palate keeps expanding. Italian food was “ethnic” and a little questionable for my grandma, and now her grandkids will hardly bat an eye at going out for Cantonese or Ethiopian. But, simultaneously, the everyday palate is systematically eliminating some flavors. Fine wine is one of the few non-industrially fermented foods most of us still routinely enjoy. Commercial fermented foods – bread, beer, some sausages,even sauerkraut – are so tightly controlled that they don’t taste fermented any more, while our pre-preservative forefathers (and nursing foremothers) were enjoying fermented flavors in everything from fruit to fish. If your palate doesn’t accept the funky edge that only shows up in food when microbes have been at work, and if we can take for granted that too much unadorned sour and bitter isn’t much fun, then sugar and fruit is pretty much all that’s left to enjoy in wine. Say what you will about natural wine. They’re keeping alive a more colorful palette, or palate, that doesn’t tuck all flavors into the clean, tidy, limiting boxes of industrialized food.

Meanwhile, everyone knows that dry wines are the more sophisticated choice. No one wants to be their embarrassing (maybe working-class, maybe immigrant) grandma who kept a bottle of Blue Nun or Manischewitz in the bottom of the china cabinet. Hence, we end up with wine that pretends to be dry while actually being sweet, while the really dry dry wines and the honest-faced sweet ones are niche products. Then better science conspires against us, because safe from microbial and chemical spoilage even our dry wines would be called sweet under Locke’s classification. Unless you’re a Kendall-Jackson drinker trapped in a natural wine shop, you probably won’t call them “stinking.”

About those forlorn sweet whites? I have a theory. The best taste a bit like dirt: earthy, funky, wonderful. Heaven in a glass if you associate happiness with muddy afternoons and good blue cheese. Fermented, mushroomy flavors in your food not a good thing? Well, there you go.