I was raised in Austin, Texas.

“Organic,” “natural,” “holistic” and “eco-friendly” are terms I grew up hearing. And I’m pretty sure everyone has become familiar with the terms “green” and “sustainable” in recent years. However, “biodynamics” and “biodynamic farming” I was not too familiar with; these may not be too familiar to you, either.

I have seen “biodynamics” in print a few times, but the term did not mean to much to me because I really didn’t know what it was. On a recent trip in Oregon, my wife, Lindsay, and I kept hearing references to the biodynamic movement happening among wineries in the Willamette Valley.

Most if not all of the wineries we visited were organic and fully sustainable, which isn’t surprising considering how environmentally conscious Oregon is. But biodynamics is just coming into the general public’s awareness, even in hippie-friendly Oregon.

Upon returning from our Oregonian adventure and conducting some research on my own, I was surprised to learn that biodynamics is not really new at all. The father of biodynamics is Austrian Rudolf Steiner (1861-1925). Steiner is credited with creating the first ecological farming system. 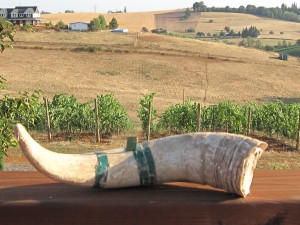 So, what exactly is biodynamics, you ask?

Basically, the winemaker puts herbs in an old cut-off cow horn and buries it in the ground. After several months have passed, the winemaker digs the horn up during the full moon, but only if the groundhog has seen its own shadow. Then the winemaker makes a potion of magical tea, sprays said magical mixture on the vines, drinks some of the tea, and holds hands with the field workers around a fire while Pink Floyd plays backwards on an iPod.

According to Wikipedia, “biodynamic agriculture is a method of organic farming that treats farms as unified and individual organism, emphasizing balancing the holistic development and interrelationship of the soil, plants and animals as a self-nourishing system without external inputs insofar as this is possible given the loss of nutrients due to the export of food.”

In English, this means that biodynamic farming is similar to organic farming, in that it strives to avoid chemicals and pesticides (those “external inputs”) so that the resulting product is as true to its natural environment as is possible.

As explained to me by Bill Hanson, assistant winemaker at Panther Creek in Oregon, in biodynamics, heavy emphasis is placed on composts and manure. Methods that are unique to the biodynamic approach include the use of fermented herbal and mineral preparations as a compost additive and field sprays (teas) and the use of the astronomical sowing and planting calender.

In winemaking, biodynamics is really just optimizing the terroir. If you know anything about winemaking, then you’ll recognize this term and its importance to winemakers. Terroir is the soil the vines are grown in, the weather conditions of the area, and the farming techniques used that make the grapes unique to the vineyard, which translates to the unique identity of the wines produced.

So why isn’t every vineyard employing biodynamics and why is it still a hush-hush topic, even in Oregon?

Well, most studies have shown relatively little direct effect of biodynamic practices on the product’s superiority. However, the studies do note improvement to nutrient content of the compost, and field sprays (teas) contain substances that stimulate plant growth.

In addition, much biodynamics is based on faith: Biodynamics is believed to transfer supernatural and cosmic forces into the soil and, ultimately, the wine.

You’d be surprised, though, by just how popular biodynamics is, even if it does come across as something a long-haired hippie freak would use to make sure their, uh, “crop” was as stellar as possible.

Today there are 529 biodynamic wine producers worldwide, with more converting to the practice every day. Biodynamics is being used in vineyards in France, Italy, Spain, Germany, Hungry, Austria, Switzerland, Chili, Argentina, Portugal, South Africa, New Zealand and the U.S. 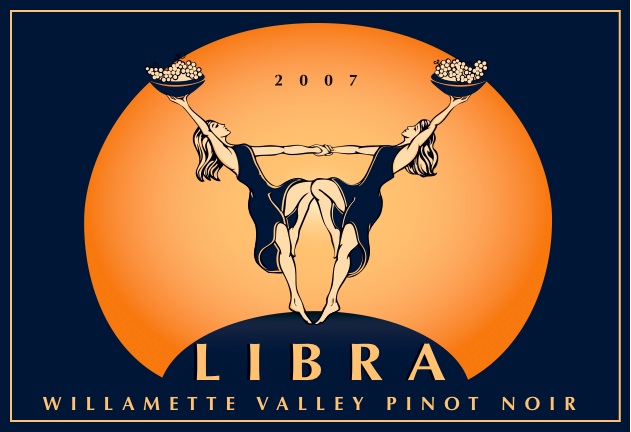 In addition to working for Panther Creek, Bill Hanson, and his wife, Linda, are also making their own wine. Libra Cellars, the Hansons’ wine label, is completely sustainable and biodynamic.

My wife and I got a first-hand look at the process at Bill and Linda’s vineyards. 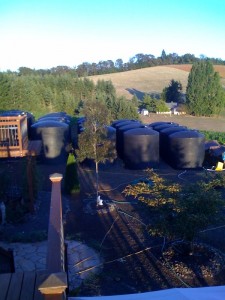 They have massive water tanks that hold water collected from rainfall. Bill connects water lines to the tanks as needed.

The field preparations — or teas, as Bill likes to call them — are a mixture of manure and crushed quartz. This mixture is stuffed inside a cow horn, buried in a compost chamber in the spring and taken out in autumn.

Once dug up, the horn’s contents are mixed with water and sprayed at a low pressure over the vines in order to help prevent fungal diseases. Herbs used in the compost preparations are often used in medicinal remedies.

Some of these herbs are oak bark, stinging nettle, chamomile blossoms, yarrow blossom, dandelion, valerium and horsetail. In a sense, Bill is a modern-day apothecary of the wine variety.

Bill says he is trying to balance the holistic development and relationship of soil, plants and animals as a self-nourishing system. And he manages to make some pretty fine wine in doing so.

We had the opportunity to try their Pinot Noir and Pinot Gris, both of which were exquisite. Both of the wines paired very well the salmon Bill grilled outside on the deck over looking the vineyard.

Here, in Bill’s own words, is what Libra Cellars is about: 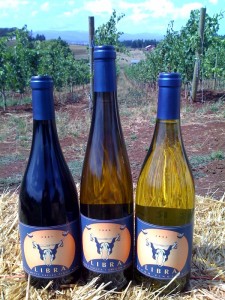 • The main thing is that Libra represents balance. … The origin of the word derives from the Latin meaning “balances” or “scales” and it is sometimes referred to as the Balance. The key to fine wine for drinking or cellaring is balance. We put the scales on the back label.

• The sun enters Libra around the Autumn Equinox, when day and night are of equal length. Thus, this is when the Earth and the sun are in balance. … When the sun reaches this point, spring and summer have passed and the harvesters are weighing and balancing the fruits of their labor. Libra represents the zenith of the year and coincides with our harvest.

• The Greek mythology related to Libra is pretty cool. Persephone was the daughter of Demeter, the goddess of agriculture or “all things growing.” Libra represented the Chariot that transported her back from the underworld, bringing spring with her. Demeter, of course, is now the name of the official Biodynamic Certification. We also practice biodynamic composting methods and dabble with the spray preparations, so the story is particularly interesting.

• Libras like gentleness, sharing, conviviality and the “finer” things in life … and they tend to be mischievous.

I will do a post and give detailed tasting notes on all the Libra wines when they hit the shelves soon.

Until then, check out some of the biodynamic wines available, and see if Voodoo Vino whets your palate. 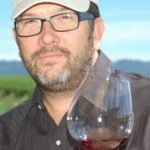 Michael Humphrey lives in Galveston County and works as a wine salesmen and also publishes the Galveston Wine Guy Blog. Read more at his blog http://galvestonwineguy.blogspot.com