An Evening With Georg Riedel

“My glasses hate water,” said Georg Riedel, as he opened a mid-May spirits and wine tasting in Ljubljana, Slovenia’s capital. 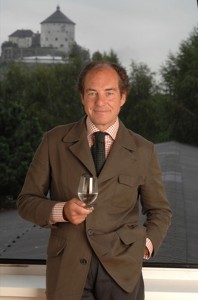 Riedel, head of the Kufstein, the Austria-based glass company that holds cult status among wine geeks and mainstream consumers alike, threw out a number of audience-pleasing quips that day. He called the generic balloon-shaped glass “an enemy of red wine.” He showcased an odd-shaped decanter that, when turned upside-down, released not a drop of wine (the trick is to position the wine in the decanter’s odd, spherical glass chambers). And he boasted that he has successfully fooled the world’s best tasters by serving them the same beverage in different glasses; on a number of separate occasions, they’ve even mistaken whiskey for cognac.

Riedel, 61, fluent in English and dressed in a sharp double-breasted suit, turned out to be half-showman and half-salesman, with a little dose of seriousness. Himself a tenth-generation glassmaker, Riedel now leads a $265 million glass empire, brushing shoulders with world-renowned winemakers such as Mondavi and Gaja.

It was his father Claus’s decision in 1958 to shape each glass according to the character of the wine it’s meant for; the younger Riedel now says his company has successfully “helped decode the DNA of wine” by producing glasses that precisely accentuate variety-specific aromas.

The process of designing a glass starts by traveling to specific wine regions, Riedel told the audience of about 200, often organizing wine workshops. There, his company’s experts ask local connoisseurs and industry professionals for their input on the shape of the glass and how it makes the wine taste. Fifty to sixty prototypes are made before a specific shape is chosen. The company, Riedel insists, will never go straight to the drawing board to design a glass. “Glasses are born through tastings,” he said. “You feel the wine when you taste from my glasses—not just taste it.”

To prove his point, Riedel presented the audience with top Slovenian wine in his firm’s Chardonnay, Riesling, Pinot Noir, and Cabernet Sauvignon glasses (this last being the company’s bestseller). The one and a half hour tasting was meant to prove to us that each wine really did seem “at home” in one glass only.

As we poured the wines, familiar aromas first came forward, then became detached from the taste that followed as the wine was tried in a new glass. Sure, the aromas were there, but a glass other than the “home” glass seemed to accentuate only a single element, rather than a whole spectrum of aromas. Chardonnay poured into the Riesling glass got rather one-dimensional, stripping the palate of most of the otherwise creamy oak texture. Pinot sipped from a Cabernet glass over-accentuated the grape’s acidity. 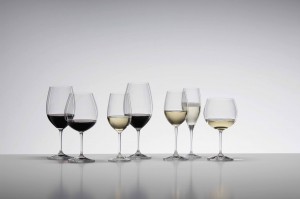 The difference, the audience was told, was not only in the size of the glass (there was obviously no space for Chardonnay to breathe in the Riesling glass), but also in the rim diameter, tailored to control the flow of wine into mouth and to hit the correct tastebuds.

Everyone seemed convinced. “Glasses definitely change wine. They give priority to what is important in a wine, and maybe hide its flaws or give secondary importance to some elements,” Primoz Lavrencic, of the well-respected Slovenian Sutor Winery, told me following the tasting.

Riedel the showman had made his point. But once off the podium for an interview, his mood turned serious, even a bit somber. Just as winemakers have been hit by the economic downturn, so, too, has the world’s leading glassmaker. The impact could transform this enduring business.

“The crisis has had an effect on the quality of wines consumed,” he told me. “The quality has been reduced, and my fear is that the excitement of wine is diminishing.” The Asian market, says Riedel, has caught the attention of wine producers and is also now one of the major hopes for his own company.

Moreover, some critics complain the “one variety, one glass” concept has gone too far, and Riedel says that, due to economic factors, “the concept…will not be outdated in the future, but maybe it will be less important.”

Five glasses can actually cover it all, but when pressed, Riedel turned philosophical. “How many glasses do you need? I think—one. For the variety you like the most,” he says. “How much do you need to spend? Spend as much as you spend on an average bottle of wine.”

And what about those who remain unconvinced? “You’ve got to let them taste.”