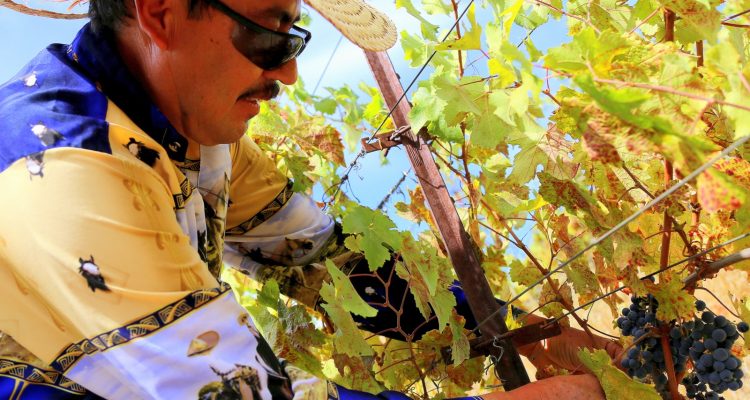 Harvest is a few weeks away in the Napa Valley and Alberto Ramos is combing through a block of Cabernet Franc, on the hunt for unripe grapes. Sunshine settles into the 90-acre bowl-shaped vineyard as he runs practiced fingers over the clusters, flicking green and pink berries to a dusty death.

No one has to give him detailed instructions. Ramos, the crew leader, has been working for Cain Vineyard & Winery for 18 years, part of a 10-man, year-round, full-time crew. He’s worked the more common system in viticulture, where temporary workers are called in at strategic points in the season. This, he says, is better. Every year, he’s learning, getting more experience – and getting better at his job. Turns out hiring viticultural workers year-round isn’t just good in terms of providing a stable income with benefits. It’s good for the grapes, too.

“These men – this is their vineyard. They have a sense of pride and a sense of ownership and they know this vineyard so well,” says Ashley Anderson-Bennett, associate vineyard manager.

Steeply sloped, with multiple soil variations and microclimates, this isn’t the kind of vineyard where at pruning season you issue a blanket order: “Leave two canes, six buds each,” she says. “You need to know the vine and feel the vine and know what the vine needs. If I got a temporary crews in – one to sucker, one to crop-in, one to pick – they wouldn’t have that connection with the land and they wouldn’t know those vines.”

Cain Vineyard went to a year-round, full time crew in the vineyards with vacation, sick time and health care when Chris Howell became general manager in 1991. A few years later they added 401(k)s for everyone at Cain. The goal is a 40/hr week if there’s not too much rain and during busy times the crew works a 50-hour, six-day week.

Back in 1991, Howell remembers getting a fair amount of push back from people who didn’t think it would work. How could you get harvest in without extra people? What would workers do over the winter?

While Cain does sometimes have to bring in extra workers, for things like weeding, their experience has been that you can get by with a small, skilled crew. Their diverse hillside vineyard doesn’t ripen simultaneously, so harvest can be staggered, and requires care throughout the year, including during winter storm season. During winter, workers each have their own vines to prune.

Over the past 15 years or so, more vineyards have moved to full-time, year-round crews in the Napa Valley, says Jennifer Putnam, executive director of the Napa Valley Grapegrowers. Capitalizing on the trend, the Napa Valley Farmworker Foundation has raised nearly $2 million since 2011 to support educational and professional development opportunities for the group, reaching more than 7,500 vineyard workers and their families, and providing more than 500 hours of education.

Having experienced hands means “no fire drills, which is wonderful,” says Doug Shafer, president of Shafer Vineyards, which has a full-time, year-round crew of about eight. Shafer does bring in temporary crews at certain times of the year, for things like leafing and fruit thinning. “What’s great about my core group of guys is they get it. They’ve been here. They’ve been working with [winemaker] Elias Fernandez for years. So when these other guys come in, the temporary help, they’re my lieutenants, my captains out there. They watch things. You add all that up you get better grapes, better quality, better wines.”

Despite the growing acceptance of year-round, full-time vineyard workers, Howell and Anderson-Bennett are quick to point out there are still a lot of seasonal workers out there and even outfits like their own aren’t creating a workers’ Utopia. Working the vines is backbreaking, wages are low and the cost of living in the Napa area is high. Anderson-Bennett  recently was unable to hire a promising candidate from out of state because he couldn’t find a place to live that fit his budget.

Napa Valley farmworkers regularly start at around $12 an hour, according to the NVG, which is above the national average of $9-$12 an hour for agricultural workers. At Cain, most of the crew are at $14 or above.

Several crew members have more than 10 years at Cain and some are closer to 20.

Alberto Avila, who runs the irrigation system, a key responsibility, has worked at Cain since 1998 and likes the feeling of being familiar with the quirks of the place. Working a steady job is “better for me because I have a family. I have work. I have something to bring to my family,” he said. “If you don’t have work, you don’t know what’s going to happen.” Cain is a relatively small winery, making 20,000 cases a year, but Howell thinks the full-time workforce concept can be scaled up. “There’s no reason why not. It just depends on your attitude and how your vineyard works.

“If you want to have a long-term vineyard you need to have long-term people working in the vineyard,” he says. “The two just go together.”