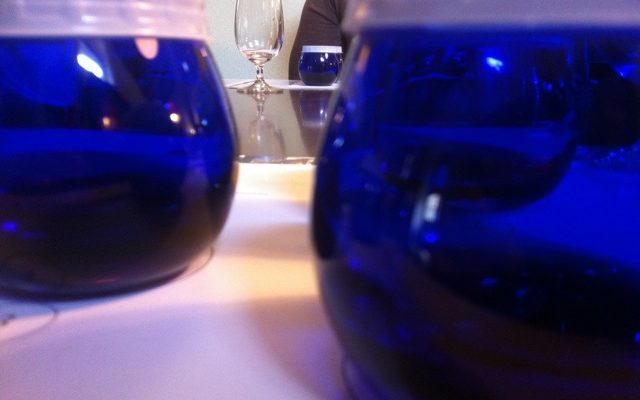 Sicily is a cornucopia of beauty, art, history, landscape, delightful food and wine. It’s almost impossible to list all of them in a few lines. However, there are at least three things you absolutely cannot miss, if you are going to travel in Western Sicily, between Marsala and Menfi. I discovered them recently, when I was there organizing an international wine bloggers’ tour in this part of the island.

Ettore & Infersa Salt pans. Salt is a very common ingredient, found on our table every day, and generally we don’t worry about its quality or where it comes from. But in the past it was regarded as more precious than gold. Thus, if you are in Marsala, don’t miss the amazing view of “Ettore e Infersa Salt Pans” with its small hills of bright white salt glittering in the sun, its old windmills, and its large basins with sea water which turn in pink and orange at sunset.

These salt pans on the coastal area connecting the towns of Marsala and Trapani produce about 10,000 tons of sea salt each year, and are still worked manually. Here, you can also have a truly tasty experience yourself: a salt tasting. In a small room inside the largest windmill, different kinds of salt are offered with the simplest flavors of Sicilian food: bread, olive oil, tomatoes, fresh fruits. You can experience pairing the salt pan crystals with the tomato, or the “flower of salt” (a powdery, soft salt) on a slice of melon. Or eating the salt flavored with Mediterranean spices sprinkled on bread and olive oil. Even fresh lemon juice gains a more intense flavor with a pinch of very pure salt on your tongue.

After the tasting, an evocative walk through the salt pans allows you to better appreciate the salt production process.  Finally, at the end of your visit, I suggest stopping for dinner at Caffè Mamma Caura, a cafè-restaurant at the entrance to this site where you can experience a truly magical moment admiring the unique sight of the sunset over the salt pans, while eating delicious typical dishes with fish, seafood and fresh vegetables.

In terms of eating, you know that Sicily is heaven for olive oil. Obviously, there are many different varieties of olive, but one of them in particular is popular also in the United States: the Castelvetrano olive, which in Sicily is known as Nocellara del Belice. In general, oil olives are small and not very good to eat but Nocellara del Belice is a medium-sized, excellent table olive. Its oil is highly treasured; typical notes of artichoke and sometimes green tomato, almond and green leaf make this olive oil perfect for the traditional pane cunzato.

This is a traditional seasoned bread: the recipes differ in each Sicilian city or village. I tried one from Menfi. This Pane cunzato is like a big bruschetta: slices of grilled bread dressed with a generous dose of olive oil, fresh tomato, dried oregano, sometimes capers, fresh basil and salt. I ate this for breakfast – very unusual for me, because I usually eat sweet foods in the early morning, not salty ones. But I must say that it was a great experience – one I would be happy to repeat!

In Italy you cannot eat something without drinking wine, so the third thing I suggest doing in Western Sicily is looking for a very special wine, one that has almost disappeared: the perpetuo. This was the name of the traditional local wine of the city of Marsala. It’s a white wine from native grapes like grillo, with a naturally high alcohol content (16%-18%). Its winemaking process (“in perpetuum”, i.e. for ever) was very similar to the solera system used to produce Sherry in Spain; whatever was consumed from a barrel of wine was replenished with younger wine, and so it went on …forever.

Toward the end of the 1700s an English merchant, John Woodhouse, happened to land in Marsala, fell in love with Perpetuo and decided to import it. In order to preserve the product while shipping by sea he added some alcohol. The resultant wine tasted like other fortified wines which were popular in England and immediately became a huge success: Marsala was born. Nowadays it has spread everywhere in the world.  Sadly though, in general, it’s often only a cheap, commercial wine. However, if you want an idea of the “old” perpetuo, you can buy and drink a bottle of a well-respected wine: the “Vecchio Samperi” from the Marco De Bartoli winery, a dry, liquorous wine, made with grillo grapes, and aged using the ancient “perpetuo” method of production.

In addition, a tasting of the unavailable Perpetuo is still possible, in the Relais Baglio Donna Franca not far from Marsala. This is not only a relaxing resort, but also a winery. Its owner, Giacomo Ansaldi, winemaker and agronomic researcher, is an expert on perpetuo wine. During his many years of research he discovered a number of very old barrels of Perpetuo, and collected them. So, if you consider yourself a true (and curious) winelover, go and visit him: he is always glad to tell the history of this fascinating wine and share a glass of it.