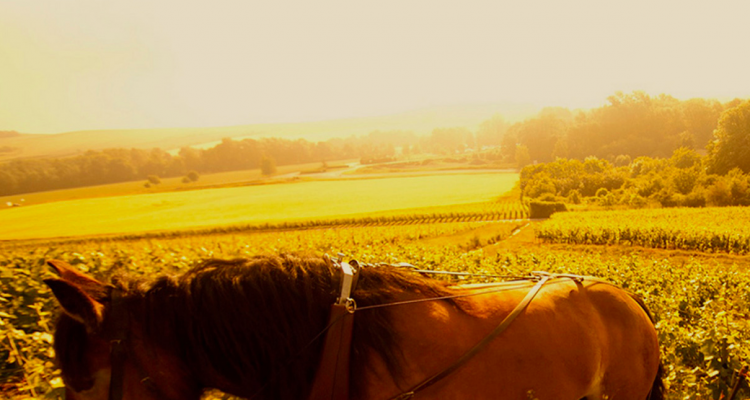 The vineyard at Champagne Philipponnat 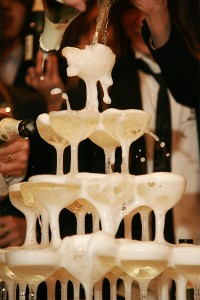 As the year draws to a close, and the base wines have finished their alcoholic fermentation the people of Champagne are excited about the 2013 vintage.  Many had been worried by the late harvest dates; it has been 25 years since the harvest dates lingered into October.

The development of the vines had been significantly slowed down earlier in the year by the long winter and cold spring. Flowering tentatively started at the end of June for the white grapes (chardonnay) but the cold and rainy weather made for irregular fruit set. Pinot noir and meunier mainly flowered in the middle of July when the sun had finally come out to play. Summer stayed hot; in fact the region had its highest ever mean temperatures for the months of July and August, which was great for the grapes. A short rainy spell at the beginning of September allowed the vines to replenish their water supplies before the sun returned to provide optimal maturation conditions right up till harvest.

It is quite rare in Champagne to have such a long Indian summer with temperatures regularly peaking above 70 degrees till well into October.  Despite the good weather many vignerons were anxious right up till harvest. After the small 2012 vintage where the region had to dip significantly in their reserves to make the appellation, vignerons and négociants alike were hoping to bring in a decent crop. The appellation yields had been set in July – quite early in the game – at 10,500 kg/hectare of which 500 kg had to come out of the ‘Réserve Individuelle’ (RI ) and another 3000 kg/hectare to top up the RI again (so maximum 13,000 kg/hectare). The yield restrictions are set every year by the Champagne Bureau (CIVC) taking into account two factors: actual crops on the vines and sales forecasts for two years from now.

Dwindling Champagne sales volumes were probably the main reason why the appellation yields had been reverted to 2010 levels after having been set higher for the last two years, as the crops in the vineyard were plentiful. So plentiful in places, that the grapes in some area struggled to increase their sugar levels resulting in very late harvest dates. Harvest start dates are decided on village level based on average ripeness and weather conditions, and estimated yields and are set per variety. The irregular and long flowering period resulted in very varied starting dates for the harvest, with chardonnay and pinot meunier coming in several days before pinot noir in the picking line up. Roederer’s cellar master, Jean-Baptiste le Caillon, noted that it was the first time he could remember “finishing pressing all the whites in the Côte des Blancs before they even started on the Pinot Noirs in the Montagne de Reims.”

The 2013 harvest took over a month to be completed, which is once again pretty unusual for the Champagne region. However, according to Pascal Doquet, an organic Champagne producer in Vertus, the weather conditions in 2013 allowed the grapes to ripen slowly and evenly, resulting in overall good alcohol percentages, a great acidity and low pH’s. “These conditions are excellent to make age-worthy wines,” he asserted.  Doquet mainly grows chardonnay, and the chardonnay this year was very elegant and flavorsome. The irregular flowering had resulted in uneven bunches with a lot of hen and chicken (millerandage), and lower overall yields at around 11,000kg/hectare. If the chardonnay bunches were rather light, the meunier and pinot noir made up for it. Delphine Richards from Champagne Francis Boulard et Fille was very happy with the quality and quantity of the pinot meunier they harvested in their vineyards in the Vallée de la Marne, commenting, “We finished off with the meunier and we finished in style – the grapes were perfectly healthy, full of flavor, with sugar levels around 11 % and a great acidity.”

Eric Rodez, a Champagne producer in Ambonnay, compared his pinot noir with black gold.  “2013, like 2012, is once again a vintage year,” he said. “However, unlike last year, it will be a year which will allow us to differentiate between the people who worked in harmony with their terroir, and the others. Everybody has harvested a good crop, but only some of us also harvested a beautiful crop.”

It is more than likely that 2013 will be a vintage year. It has, just like 2012, all the qualitative potential to make age-worthy wines: great acidity, good sugar content and a low pH. Dominique Demarville, cellar master at Veuve Cliquot, tentatively compared the 2013 harvest with 2008 or 1995. Roederer’s Le Caillon saw similarities with 1996, 1988 and 1982 and believes 2013 “could be a great Cristal year.” Charles Philipponnat from Champagne Philipponnat also confirmed they will make a 2013 Clos des Goisses. The Clos des Goisses is a single vineyard vintage cuvée only made when the quality allows it.

Earlier this year, Olivier Krug was very reluctant to commit to a vintage in 2012. According to him, the Krug House “first has to guarantee the Grande Cuvée, then assure the reserves needed to make future Grande Cuvées and only if there is enough left after that can we think about a Krug vintage. I have a feeling that this may be the case in 2013 but it is way too early to decide this just yet.”

Besides the qualitative characteristics, 2013 has more chance than 2012 to become a vintage year as this year’s harvest was more plentiful. 2013’s total harvest volume is large enough to make vintage wines without compromising the non-vintage wine volumes.  We should not forget that more than 80% of the Champagne produced and sold is non-vintage, and these are the volumes which need to be guaranteed. Vintage Champagne is just the cherry on the cake.