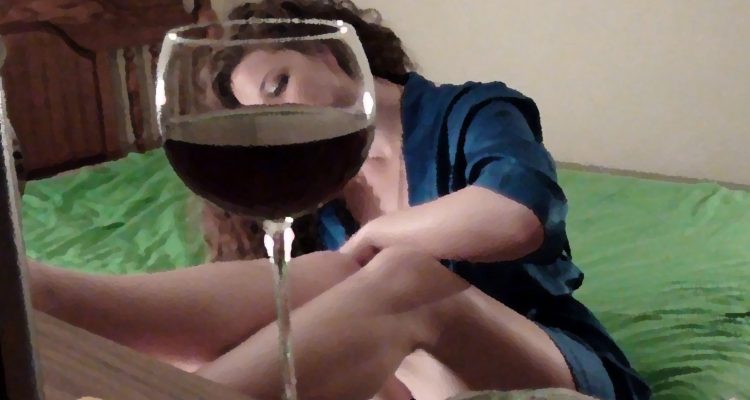 When Is Wine Art?

“Artistic expression is the window to a person’s soul. Since I began making wine in 2005, La Fenêtre — French for ‘The Window’ — has been the expression of my art: winemaking.” — Wine back-label copy

Is wine art? Is it always art? Or is it nothing more than craft and commerce?

I had this discussion on Twitter with my friend Rachel Black, a former running buddy and anthropologist who specializes in food and wine. Black, who presented a paper on “the artification of wine” last week (I haven’t seen it) suggested that it’s a good enough topic that people will read a post about it even without a photo — or pointillism painting — of a topless woman. We’ll see.

I believe wine can be art. I think this is obvious. Wine can be a product of creativity; it can be made to express a feeling, and to have its drinker feel something. It can be a means of communicating an idea.

It does not have to be any of these things, and in fact it rarely is. Most wine is not art. Most wine is commercial craft. And that’s fine. One of my first tweets to Rachel on the topic was, “Some wines are art projects, but I would rather drink a wine that the maker considers craft.”

I feel the same way about film, which everyone acknowledges can be art. I’ve done some film criticism, attended film festivals, and I’d much rather watch a well-crafted genre flick than a cutting-edge film art project.

Black wrote, “Once you consume wine it is destroyed, gone. The only possible remain is a tasting note.” That’s also true of the shows of Christo or Laurie Anderson. Art in the 21st century can be fleeting, disposable, leaving nothing but memories, Instagrams and logo gear.

To be “art”  is not synonymous with being “good,” and certainly does not mean “universally appreciated,” in its era or afterward. Van Gogh sold only one painting during his lifetime. His era, impressionism, was immediately followed by cubist painting, which was important at the time, is still taught as important in art schools and exhibited around the globe and which I personally find ugly, smug and disdainful of the viewer.

Is art in the process or the results? It’s an important question for wine. As Black pointed out, “The immediacy of pleasure does not necessarily make something not art.” In other words, art in wine doesn’t have to taste bad.

I had a 1993 Au Bon Climat Chardonnay from Bien Nacido Vineyard the night before sending this off to be edited. It was lovely, balanced, still fresh, complex. I swatted the hand of the server who tried to take my last sips away. Delicious wine. But it is just a well-made Chardonnay. Is that art? I can’t say that it is.

Here are some of my suggestions of wine as art, that you’ll like:

* Qvevri wines, buried in the ground by vintners who have access to modern technology. The deliciousness, or not, of the final product is beside the point of their existence.

* Xavier Milhade of Château Recougne in Bordeaux is making a single-variety Carménère for various reasons: because he thinks Bordeaux should grow this grape again, because it might be a hedge against global warming. Because he’s curious about how it will taste. Not because it’s delicious (it’s not, sorry Xavier) or because he thinks it will sell.

* David Lett planted Pinot Noir grapes in Oregon in 1965 though UC Davis viticulturists told him not to. He didn’t know what he would get and, if it did get ripe enough to make into wine, he had no way to sell it. So that would make his first wines art projects. Can’t say that about Oregon Pinot now, delicious or not.

* Abe Schoener at the Scholium Project makes the most self-aware art wines in the US, and is more skilled than anyone at discussing them as such.

Now here are some of my suggestions of wine as art that you won’t like:

* Wineries aging wine in the ocean. Maybe it’s just for commercial purposes, but it’s also to say they did it. How is that different from modern performance art?

Francis Ford Coppola said, “An essential element of any art is risk. If you don’t take a risk, then how are you going to make something really beautiful, something that hasn’t been seen before?”

Is the wine of Domaine Romanée-Conti art? They are limited to their tiny area, and they use a minimalist regime, trusting in their terroir and nature. They do have a greater annual weather risk than vintners in, say Russian River Valley, but they have a fortune and a customer base which would buy anything they release; the stakes are low. Doesn’t sound like art.

What about wines that are made with unique technology, like unusually shaped tanks. Is that art? Was the first use of micro-oxygenation art? Remember, just because you or I don’t like it, or because it’s commercial, doesn’t mean it’s not art.

Which leads to this thought: is minimalism in winemaking art? In sculpture, those rocks don’t sculpt themselves.

Who decides what is art? I never have figured that out in the art world. Jack Kirby could draw rings around his contemporary Roy Lichenstein, and used just as much irony. Was it just the size of the canvas?

For that matter, Takashi Murakami is one of Japan’s most popular contemporary artists, and he sells action figures that are intentionally uglier than stuff you can purchase in a Disney World gift shop. So that makes it art.

Apply this thinking to wine. What if someone intentionally makes a wine to disturb the audience. Is that art? Is it art if a winery makes an 18% alcohol Chardonnay by pushing the boundaries of ripening beyond what has been tried before?

I don’t claim to have answers here, just one question. And I’d like your thoughts on it.

When is wine art?