Utah: Land of Wine and Honey

Utah, well known to many for its Mormon-based teetotaler ways, surprisingly has a historical legacy of making and drinking wine.  That legacy is being carried on today by passionate folks like Will Fryer of Castle Creek Winery north of Moab.

Unfortunately, most of the vineyards from Utah’s legacy past are gone even from memory.  In 2006, Castle Creek Winery, located along the banks of the Colorado River just north of Moab, and currently the largest operating winery in the state, planted 10 acres of its own Syrah and Cabernet grapes. This planting almost doubled the surviving acres of vineyards in the area. 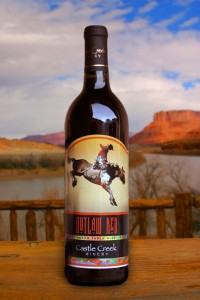 Fryer, head vintner at Castle Creek, in developing a winery, epitomizes Utah’s industrious, organized, and cooperative reputation as the “Beehive State” and acquires most of his grapes from Colorado, contracts some from local Moab vineyards, grows some and is always looking for more sources.

Fryer notes that the areas current production of grapes has leveled out possibly due to the commercial development that was running rampant in the area before the economic recession. Now that new construction has slowed he is hoping that landowners will consider using available acreage for planting more grapes.

Despite the long-term commitment and upfront costs of planting a vineyard, the area around the Colorado River in Eastern Utah has proven to be able to produce profitable vineyards, even if only on a very small scale. As production at Castle Creek and Spanish Valley, another award-winning winery in the Moab area, increases it is expected that more growers will fill the void.

Historically, as early as 1875 there were over 500 acres of vineyard planted in Utah producing upwards of 1,700 tons. It has been argued that the wine produced during this period was not popular for its taste but rather due to an unusual revelation passed down by Joseph Smith, founder of the Mormon Latter-day Saint movement. Smith proclaimed that the Mormon saints must use water for the sacrament unless they had access to wine of their own make. This ultimately gave birth to the Mormon Wine Mission of the 1860’s based in Toquerville, Utah. Brigham Young himself appointed John C. Naegle as the master vintner of the operation, which was soon producing wine in 500-gallon casks to be shipped and sold at the Zions Cooperative Mercantile Institution in Salt Lake as well as other locations throughout the State of Deseret, a provisional state that was a precursor to the state of Utah. To this day, the well-drained soils and chilly summer nights of Toquerville make it some of the premiere grape-growing land in Utah, although there are currently no active vineyards in the area.

The moral conflict for wine drinking Mormons, who grew more numerous as converts were shipped in from Europe, started as early as 1833. This was when Joseph Smith received his revelation known as “The Word of Wisdom.” Within this revelation was a strong recommendation that Saints avoid wine and other strong drink. But many Mormons where still actively growing grapes, grain and other fruit for the production of wine and spirits after they first trekked into Utah in 1847 and throughout the rest of the nineteenth century. Brigham Young even had his own Valley Tan whisky that was supposedly a step or two short of blinding strength. 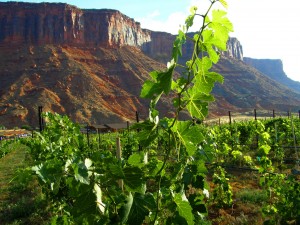 Even after the widespread adoption of The Word of Wisdom, which took around 90 years, and the beginnings of the temperance movement, the enjoyment of wine couldn’t be stamped completely from the state. In 1911, just two months after the passing of a local bill prohibiting the consumption of wine in and around St. George, several young men secured a five-gallon keg of wine and sneaked west of the city to indulge. The illegal time of joviality quickly went downhill though when one of the young men shot and wounded one of his fellow imbibers, according to lore. Eventually several of the men were brought up on charges of drunkenness.

Utah was a latecomer to adopt a statewide ban of alcohol. It wasn’t until 1917, after several failed legislative attempts and being targeted repeatedly by prohibition activists, that Utah became officially dry. But this ban was even less effectively enforced in Utah than in many other parts of the nation. Bootleggers came from every part of society and operated all over the state. Between 1925 and 1932 federal agents operating in Utah seized 13,000 gallons of wine and 332,000 gallons of an easily brewed mash. In 1933 Utah became the 36th state to vote to appeal national prohibition, and thus ironically was the state that tipped the scales. Utah’s state prohibition laws were appealed during the same election.

In 1935 the doors opened to the first Utah state liquor store, and the current system for liquor sales in Utah was established. Almost $55,000 worth of business was transacted in Salt Lake and Ogden during the first 15 days of legal liquor sales. Since then the delivery and sales of wine and alcohol in Utah have been tightly controlled by the state government through the Department of Alcoholic Beverage Control (DABC). This department operates as the single legal purchaser of wine and spirits for the entire state. One man, wine coordinator Brett Clifford, is in charge of all wine acquisitions.

While this sort of system limits the available outlets for the purchasing of wine to the state liquor stores, it has not limited the selection of great wines. The four state-operated wine stores in and around Salt Lake City, with one in Park City, have a magnificent selection due to Clifford’s excellent and broad tastes. Not many cities twice the size of Salt Lake could boast such a wide variety of great and affordable wines to choose from (although the affordability is tempered by the 21% profit margin the state liquor stores operate under). Utah’s restrictions on the selling and buying of wine have also done nothing to curb the growing appetite for wine. The DABC reports that state revenues on alcohol have risen by $20 million since 2006.

Fighting prohibitive laws in Utah to scratch out a living in the wine industry has not been easy for the few that are currently making it happen, but the last decade has brought about some successes. In 2004, father and son, Colin and Will Fryer, along with others in the area, were able to lobby the state legislature in order to allow wineries to remain open on Sundays and holidays. They were also able to reduce taxes to a manageable level. And because of the great tourism and skiing industry already in Utah, Fryer has been able to keep his wine sales brisk.

So while Utah may not exactly be flowing with wine, it isn’t quite the hinterland of the fruit of the vine either. A shopper may never be able to pick up a bottle of Yellow Tail Shiraz at the end of the grocery isle in Utah, but at least bars no longer have to operate as private clubs thanks to legislation that went into effect during the summer of 2009. And, after overcoming the flickering halogen lights and gloomy barred windows of the nearest state liquor store, a tippler in Utah can pick up a nice Outlaw Red from Castle Creek and enjoy the fruit of the vine that, at least in part, came from Utah.