The On-Premise Silver Lining: When Restaurants Get Wine Right

If you love wine, you’ve probably had at least one memorably bad wine experience in a restaurant. The reasons for poor wine service are, by now, painfully well known to most—unknowledgeable staff, a wine list that’s an afterthought, high price mark-ups, and other offenses. And, while bashing restaurant wine service seems to be in vogue, I’d like to switch it up and shine a floodlight on three restaurants that are getting it right.

My wife and I recently spent four days in California. We went out for dinner three times, and on each occasion we found something truly delightful in the wine service. Each experience had its own uniquely positive edge, and I hope that by sharing these experiences we’ll engender more of the same in other establishments. 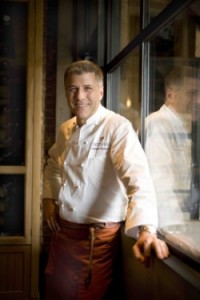 Chef Michael Chiarello’s one-year old hot spot Bottega has already earned a reputation among the locals for casual elegance and a thoughtful, mostly local wine list. Rightfully, Napa residents were extolling the virtues of the chestnut gnocchi and the chicly restored building, yet no one warned us about the wine prices. I mean, they were borderline ridiculous.

Ridiculously inexpensive, that is. I’ve never seen markups so low in California.

A bottle of Merlot from one of my favorite Napa producers, Frog’s Leap, was listed at $35—one dollar above the current retail price. Some of the more voluptuous valley Cabernets were modestly marked up; Rubicon 2005 was released at $145 and was listed at Bottega for $170, while Tim Mondavi’s Continuum 2006 was released for the same price and listed for $180. A bit saturated with Cabernet after a day of appointments, we chose a lovely young Barolo for $66, marked up only $15 from its release price.

The wine prices are even more jarring when compared to the iconic French Laundry just down the street. French Laundry is a restaurant that requires a first-born child to gain entry, and their wine list is routinely lampooned for its excessive prices, but I just can’t help pointing out the incongruity compared to my Bottega experience. At Bottega, a bottle of 2006 Hourglass, released at $135, sells for $186. At the French Laundry it sells for $240—per half bottle.

Bottega lists twenty-nine Napa Cabs for less than $100, and that list includes hard-to-find wines like Lewis Reserve. “This list was designed to allow diners to feel comfortable when they order,” our waiter explained. “The last thing we want is to make a dinner party feel like they can’t afford two bottles.”

Cheers to Chiarello and his staff for an affordable list. 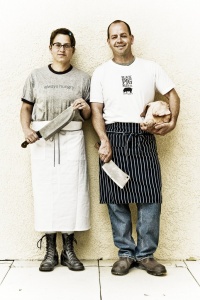 “We don’t think wine should be intimidating,” our waitress told us. “We like to make it easy-going and we’ll add a little guessing game if our customers want to participate.”

It’s simple: For a moderate price, Zazu always offers a blind glass of one red and one white wine from their list. Some regular customers enjoy the blind tasting game so much that they’ve created a running scorecard, tallying their success rate. 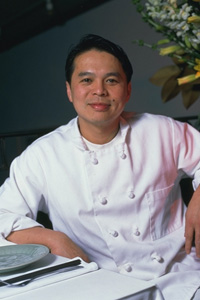 Charles Phan of the Slanted Door

This one is a bit controversial. The Slanted Door, a popular Vietnamese-inspired restaurant in San Francisco’s Ferry Building, has made headlines for its wine list. Specifically, the wine list has become a polarizing subject for wine lovers because of its scant California offerings.

Unlike most wine lists, this one comprises largely white wines. That’s because the spicy dishes beg for white wine partners, and we’re not talking buttery Chardonnays. Riesling leads, but gets plenty of help from Gruner Veltliner and Chenin Blanc.

Fans of this wine list applaud the Slanted Door for eschewing traditional California wine list practices and going with the styles and varietals that work best with the food. Critics argue, with merit, that the list could include more from the home state—with a little effort to find the more elegant local wines.

It’s a fair complaint, but it’s not nearly enough to spoil the wonderful experience of dining in a restaurant that has carefully considered every wine on the list. There are no throw-ins to please the average customer. The prices are fair and we spent as much time salivating over the various Rieslings as we did the outstanding dishes. (Don’t miss the cellophane noodles with Dungeness crab meat; it’s outstanding with a crisp Loire Chenin Blanc).

Ironically, working around the wine list’s weak spot, we finished our meal with a glass of Bonny Doon Ca’ del Solo Muscat, a California original if ever there was one.

On the long red-eye back to the east coast, we contemplated the trio of restaurant wine experiences. Each was unique, but here were restaurants that had demonstrated their commitment to the customer experience by paying careful attention to the wine program. I only hope it’s contagious.