Tainted Love: A Look at the Role of Natural Cork in Wine

This is part one in a series of posts about wine closures. In this series, we’ll explore the relative merits and drawbacks of the many different ways we seal our wine.

The pop of a cork is almost as synonymous with wine as the subsequent pouring, swirling, and slurping.  Sometimes, though, the magic of this familiar ritual is ruined by the revelation that a bottle of wine is … well, “corked.”

There are lots of reasons for cork’s dominance of the wine bottle closure market. It naturally has many physical and chemical properties that make it ideal for sealing a wine bottle, including providing a decent barrier against transmission of oxygen in wine. It’s not without its shortcomings, though, including contributing to bottle variation and, of course, the dreaded cork taint.

Cork as a Natural Product 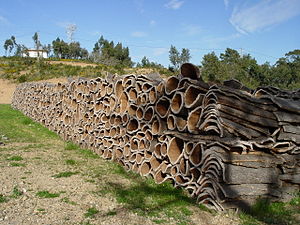 Cork is harvested from the bark of the cork oak, Quercus suber. Vast forests of cork oak cover millions of acres in the leading cork producing countries of Portugal and Spain, and many animals, including the endangered Iberian lynx, make their homes in the great forests. Unlike most trees, harvesting the bark does not kill cork oak trees, allowing for many cork harvests from a single tree over its lifetime (some trees can be productive for over 200 years), so cork production is widely regarded as a highly sustainable enterprise.

The cellular structure of cork contains a material called suberin, a waxy, complex polymer that contains oil-like carbon chains, polyphenols, glycerol, and other components. Suberin makes the cork impermeable to water and gives it a low gas transmission rate, keeping oxygen out.

Demand for cork is largely driven by demand for cork wine bottle closures, and in recent years alternative closures like synthetic corks  have taken a large chunk out of natural cork’s market share.  Around 70% of the roughly 18 billion bottles of wine produced worldwide are sealed with natural cork, down from 90-95% in the 1990s.

Since its discovery as the main contributor to cork taint in 1982, much has been written about 2,4,6-trichloroanisole, which is thankfully abbreviated as TCA. Its aroma has many descriptors, including earthy, moldy, and musty, but my favorite is “old library books.”  Estimates vary as to how many bottles have mustiness at detectable levels.  Cork industry estimates put the number at under 1%, but other sources have placed it anywhere from 3% (International Wine Competition Wine Faults Clinic, 2005), to 7% (James Laube, Wine Spectator, 2009).

Cork taint arises in cork through the action of microorganisms that live in the lenticels (the dark spots). It’s thought that chlorinated products used to bleach and decontaminate corks react with phenolic compunds in the cork to create chlorophenols, which are toxic to these microorganisms. They fight back, though, by detoxifying the chlorophenols, producing chloroanisoles like TCA. Any winery that uses chlorine-based products for sterilization puts itself at risk of TCA contamination.

Humans can detect TCA at very, very low levels; anywhere from 1-10 parts per trillion (nanograms/liter). That’s not very much at all. One half-milligram of the stuff would cause an Olympic-sized swimming pool to smell like a musty basement. Its perception varies based on wine style, and at similar levels it’s more likely to be detectable in white wines than reds. Interestingly, it’s thought that TCA and other similar compounds are indicators of potentially harmful fungal growth on food, so it’s no wonder humans are good at detecting it.  TCA itself, though, is harmless.

The cork industry, after a long period of denial and PR-based solutions, has finally started to take action against TCA. Chlorinated treatments have been replaced with hydrogen peroxide, boiling processes have been updated, and many steps have been taken to curb microbial growth during the cork manufacturing process. Still, even though cork has cleaned up its act a bit, cork taint persists.

Other compounds can also be responsible for “corked” wine, including 2,4,6-tribromoanisole (TBA—not to be confused with trockenbeerenauslese), which can also throw off a musty aroma. TBA is a cousin of TCA, where chlorine has been replaced by a chemically related halogen, bromine. In this case, the creation of TBA is similar to TCA, though the source of the bromophenols is slightly different. 2,4,6-tribromophenol (TBP), the precursor to TBA, is frequently used as a fungicide,  fire-retardant agent, and wood preservative. Ambient microorganisms in the winery could be producing TBA from TBP on wood structures, laminates, or pallets. The TBA, once in the air, could make its way into wine. In this way, a wine could be “corked” without the cork.

While cork apologists might argue that this systemic taint could happen with any closure (like cork, plastic synthetic closures and screwcap liners have a high affinity for TCA/TBA when it is released into the atmosphere), the fact that ambient TCA/TBA can enter wine does not completely remove the cork from blame. For example, in major wine competitions, the presence of mustiness in a wine sealed with a synthetic or screwcap closure is very rare, so while taint from winery sources is possible, it is likely not widespread. Even so, TBA has only been confirmed as a cork taint compound recently (2004), and there are few studies that can be used to determine its relative prevalence.

Wine writer Jamie Goode, in his book Wine Bottle Closures, argues that the continued presence of cork taint, even with the elimination of chlorine sources, may imply that the taint is simply endemic to cork itself. Other compounds can also contribute to cork taint, such as geosmin (which smells strongly of spinach and earth and comes from the use of moldy grapes) and the recently elucidated MDMP (2-methoxy-3,5-dimethylpyrazine), which is produced by a bacterium that grows on cork and oak wood.

As an agricultural product, cork is subject to some variability. This variation in the cork itself can produce a lot of variation in the performance of cork as a closure. When bottles are stored upright (and cork is allowed to dry out) its oxygen transmission rates can vary up to 1,000-fold. The variability drops when bottles are stored horizontally, but the natural variation still holds at 2-3 fold differences in individual corks.

This inconsistency in oxygen transmission rates (coupled with the random probability of cork taint) unquestionably contributes to bottle variation in wines. Meanwhile, synthetic closures and screwcaps are generally very consistent in their performance.

The Future of Cork

Cork is a remarkable product. When at its best, it allows just enough oxygen for wine to age in a slow, controlled way. However, at its worst, it can be inconsistent and, if tainted, ruin a wine. The cork industry is aware of the problems that cork taint causes and is certainly cleaning up its act.

But what is an acceptable rate of TCA appearance? One percent would still render 126 million bottles of wine undrinkable. Even if the taint is not identified by the consumer, a winery runs the risk of a novice consumer thinking that it was not the cork, but the wine itself that was bad. Furthermore, even if the taint is not detectable (even by an expert), sub-threshold levels of TCA could still affect perception of fruit. Plus, detection thresholds for TCA vary from person to person. While some might be able to smell a corked wine from across the room, others will happily quaff without qualms, so defining a standard for acceptable TCA levels (one that isn’t “zero”) is quite difficult.

There is hope for cork producers, though. As wineries strive to become increasingly “green,” many see cork as the sustainable way to go. Chlorinated products have been in disuse for roughly a decade, so perhaps when newer crops of bark come up (the trees take 9-12 years to develop the layer of cork), cork taint levels could decrease. Increased understanding of the compounds that cause the musty aroma can also help wineries to tackle this problem.