Review, The Wild Vine: A Forgotten Grape and the Untold Story of American Wine

Author Todd Kliman’s history of the American grape, Norton’s Virginia Seedling, starts off in an almost sultry manner as he teases the reader by veiling his intent. What begins to look like an unhealthy promotion of a single vineyard, Chrysalis, breaks the bonds of being a wine book and launches into the story of an American epic, a battle against nature and God: the stuff of Manifest Destiny as fought by American outsiders. And despite getting slightly overly dramatic from time to time, in the end I came off accepting and believing in the utter importance of everything Kliman wrote, because I wanted to. 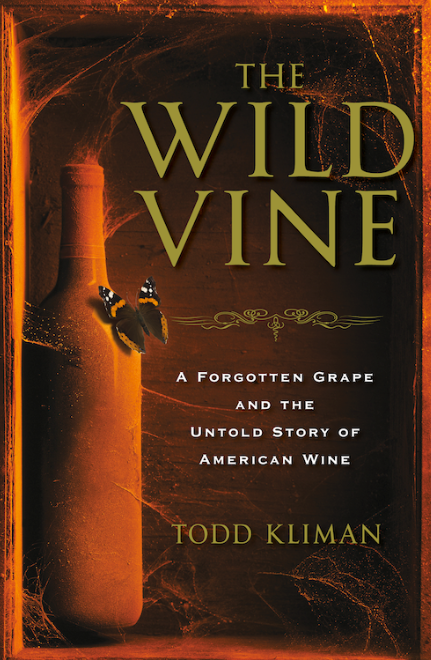 After all, most readers of The Wild Vine will want to believe that vintners are dreamers with the gumption to pull beauty from the dirt of the earth with their bare hands.

Kliman follows the struggle to yield a truly American grape and therefore a truly American wine from the likes of Dr. Daniel Norton and Thomas Jefferson through numerous lesser known hands until it finds itself squarely in the grip of an equally small, embattled and unlikely group of idealistic champions today.

Finally, with great expectation, the middle of the book rushes toward Vienna and the Universal Exhibition held there in 1873. Similarly to a great wine, the body of The Wild Vine becomes wonderfully complex, and yet remains simply constructed. Immigrants from Europe find a new home in America. Necessity forms the basis of a new American wine industry. A confluence of global factors form to create the perfect storm for an American wine success story. And yet the Norton plummets back into shadow and mystery just as quickly as it rose to global fame.

By this point in the book I found myself totally hooked. For the same reasons Kliman needed to know the truth I too needed to know what happened to norton and why. What roles were to be played by phylloxera and Prohibition?  And what of California?

Like all interesting and compelling stories, The Wild Vine takes a narrow point of view seeking a specific answer and lodges it firmly into a broader context: in this case, the tumultuous transition of America from rural and agrarian to urban and industrial.

“From the colonists at Jamestown to the pioneers at Hermann [Missouri] and beyond, what was the American story but the story of starting over, of willful reinvention, the restless search for the true and proper identity?” (p. 219)

Kliman tells this story with vivid imagery and strong characters. The end result is an engaging narrative that is all the more powerful because of its historical truth.

The story ends leaving larger matters open for discussion. Will the norton grape thrive? Will it lead the way in states like Missouri and Virginia? Or will it survive at all? Can a small handful of persistent outsiders alter the landscape of American wine?

In order to mine a little deeper into the collected knowledge of author Todd Kliman on the topic of Norton I asked him a few questions on the matter, and he was gracious enough to share his answers with the readers of Palate Press: The Online Wine Magazine.

David: What would you like to say here as motivation for Palate Press patrons to read The Wild Vine?

Todd: I guess I would start by saying that I don’t know of another book having to do with wine that is like this one. I mean, I really don’t see it as a wine book. People ask me if I would consider writing another wine book, and I always say no. I don’t feel like I have written a first. To me, I would not have written The Wild Vine if I thought it was going to be a wine book.

What excited me about writing the book was the idea of taking one grape and using it to explore something larger. I discovered in writing about norton that I was able to write a story about being an outsider. That was a story I connected with. That idea of being on the outside and struggling to get in was the story I found my way into.

David: Since the book’s release have you been able to notice any bump in Virginia and Missouri wine? Or additional attention being given to Norton?

Todd: Yeah, definitely. Jenni McCloud’s winery, Chrysalis, has had a tremendous run on Norton.  So much so that she has started to worry about being able to fulfill the demand. She has started strategizing with other growers in the state about how to produce more Norton. You know, I still don’t think Norton will ever be a dominant wine. That’s just not its place. America’s palate, since Norton’s heyday, has changed too much. But it could be much more than it is.

Also, right before the book came out, Riedel issued a Norton glass, which is really saying something. The glass itself is a statement about Norton, that it’s just an odd duck. It has a bowl shaped like a glass for a Cabernet Sauvignon but then it tapers dramatically toward the top like a glass for a sweet dessert wine or crisp white, most likely because of the Norton’s high acidity.

Virginia wine sales have gone up throughout the region, and stores are having trouble keeping Norton on the shelves. I’ve also noticed it being added to several restaurants’ wine lists. There have also been some very interesting applications of Norton, like a bakery beginning to make Norton marshmallows.

David: How would you recommend the readers of Palate Press approach Norton for the first time?

Todd: You either love Norton or hate Norton. It is a wine of extremes. Someone new to the grape and the wine must understand that. If you are used to the wines that currently represent what America is, according to the West Coast definition, Norton is going to be very different from that. Norton is not the kind of wine that you drink while curled up with a book by the fire.

Decant a Norton. Give it a half hour to open up. It makes a great wild game and meat pairing. Norton is actually a great Thanksgiving wine with the body and fruit of a red yet with acidity capable of buzz sawing through gravy and wild turkey. Also, if you can get a hold of the Riedel glasses, they really do help.

Norton will appeal to people wanting something new. Jenni McCloud, of Chrysalis, has noted that people with great wine knowledge or absolutely no wine knowledge at all tend to like Norton, while people somewhere in between often do not.

Norton should be kept in context with the sort of expression of American culture that it could have represented. I think of Walt Whitman and Mark Twain and even jazz music, and how they have come to define American culture. Norton was born of the same soil, and yet it is almost unheard of. It should be understood as a similar expression of that American experience.

David: What additional comments would you like to make in support of the “terroir-ist” movement?

Todd: I’m in favor of a wine that is more distinct rather than less distinct. A wine should reflect its time and place. Norton and the terroir-ist movement are in some ways anti-commerce, but I don’t mean that. How should I say it? It’s like a celebration of craftsmanship, love and passion, where a soulful understanding of wine, rather than the bottom line, is the imperative.

There should be a soulful understanding of wine as something that can connect people and bring them together. This is the beauty of wine. That beauty can get lost when talking about units sold. I understand that it’s hard. Grape growers and winemakers need to make a living, just like they always have in this region. But then the rupture came and there was a fracturing.

Local wine industries would do well to remember that they need to be themselves—distinctive. That they should give culture a chance to flourish. They should write their own codes and then respect them. But it’s hard to not worry about whether the flavors they’re producing will be acceptable. I hope that in 10 to 15 years emphasis will be taken off the West Coast, and placed much more broadly.

David: What was the most interesting thing you discovered that you weren’t able to include in the book?

Todd: Well, I didn’t really leave anything out of the book, I mean, there is a lot in there. [laughs] But there was something that I only alluded to in the book, that Norton was used medicinally quite a bit. People thought of it as having curative properties. I found it funny, not just that people would recognize wine as being potentially healthy, but that a doctor would prescribe it. Also, now that resveratrol has become so popular it is interesting to know that Norton has possibly more of it than any other wine.

I guess all of this was interesting to me because it just seemed so American that it wasn’t enough for a wine simply to be good, but that it had to be useful as well.