I visited Oregon’s Willamette Valley July 19-22 and wrestled with what I wanted to write for Palate Press. After just one day, I knew the story and the people were much better than just what I found at the bottom of a fat-bottomed glass of Pinot. I knew it was much better than anything I could write.

Wine geeks need to get their nose out of the glass. When their eyes shift above the rim of the Riedel they just might notice the great people behind the counters, managing the wineries, not to mention the great areas where our favorite wines are made.

So often wine journalism focuses on the geeks. Yet many consumers couldn’t care less about Bordeaux futures. Lengthy descriptions like “hints of dark fruit, well-balanced tannins, and significant aging ability,” often bear little context that is meaningful to the average reader.

I freely admit there are plenty of wine writers who know more about wine than I do. But after more than 20 years in the newspaper business I know a thing or two about telling stories and getting people to read them.

Wine journalists have the ability and the access to key people in wine regions and need to move beyond the same old wine geek fluff.

Sometimes we don’t tell the story and other times, I believe, we tell the wrong story. But often, a picture tells a great story.

During my trip, I was fortunate to have Drew Casey, a senior at the small liberal arts college where I work, travel with me for my four days. Drew is a great photographer and took many of the photos in the album attached. 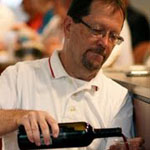