Open That Bottle Night is Just Around the Corner

David Honig
Features
February 13, 2011
Dottie and John will host Open That Bottle Night live, on February 26, 2011, from 7 pm to 10 pm Eastern, only on Palate Press: The online wine magazine. Join us on OTBN to chat with Dottie and John. Tell us what you opened, with whom you are sharing it, and the story behind the bottle. This will be the first time Dottie and John have ever hosted OTBN live, so join the conversation and make it special.

On that special evening, Ken and Rosemary Willman, of Tacoma, Wash., will treat a handful of very lucky guests to a very special bottle of wine.  Mr. Willman was born in 1960 and the wine is a Port, Warre’s 1960. This is the last bottle from a mixed case of Ports purchased “a long time ago during our London years at auction at Christie’s South Kensington. The tug of ‘oh my, this is the last bottle of that case and our last ’60’ is exactly why it is perfect for that night,” he told us—and we couldn’t agree more.

On OTBN 12, the Willmans will be joining thousands of people worldwide opening the bottle that has been too precious to open and therefore has sat and sat and sat, waiting for an occasion that’s special enough for it.

That’s why we invented Open That Bottle Night, which takes place on the last Saturday of every February. It’s a time to gather friends and loved ones, open those wines and celebrate the memories that come with them.

If you don’t have an older wine that you’ve been unable to open, buy a young one that has meaning for you. This isn’t about the wine’s pedigree or even necessarily its taste. The wine is merely a vehicle, albeit a wonderful vehicle, that has the capacity to connect you to people, places and events worth remembering and celebrating.

In Antarctica, Zenobia “Zee” Evans, a maintenance specialist at Palmer Station, which does work for the National Science Foundation, will be celebrating with 43 other scientists and support staff. This will be Palmer’s seventh OTBN. “We’re looking forward to having fresh vegetables and fruit from a supply ship coming just before OTBN, as we’ve been without ‘freshies’ for two months,” she told us. “So a big beautiful salad is #1 on the list! Also on the ship will be hand-carried special bottles of wine from one of the science groups. We won’t know what they are ’til they get here.”

In Dundee, Ore., Chef Shiloh Ficek of the Farm to Fork Restaurant at the Inn at Red Hills will prepare a special meal for OTBN celebrants, whose corkage fee will be waived. He told us he plans to make beet ravioli with goat cheese croquettes, venison carpaccio with fennel salad and Oregon black truffles, stuffed quail with Oregon Huckleberry sauce and, for dessert, ricotta stuffed crepes with brandy poached apples. Oh, man. This is Farm to Fork’s second OTBN celebration and it urged people to call quickly for reservations at $60 “because this event fills up fast.” In fact, the 20-room Inn, which offered discounted rooms for OTBN diners, sold out quickly. Chef Ficek is using last year’s experience to guide him. “People brought a lot of red wine,” he says, “so the menu is red-wine friendly.”

In Australia, Liz O’Connell and Trish Barry are in high gear promoting OTBN. They asked if it was OK if they did this as “a passion project,” not a money-making venture, using social media. We said, “The more the merrier,” so they’re augmenting the new media efforts of others who have been promoting OTBN on Twitter, Facebook and other online sites. (Robert Burke, an artist in Belmont, N.C., has even created an online playlist of songs for OTBN). Ms. O’Connell has a public relations background and her family owns a winery while Ms. Barry directs a social media marketing agency that has represented wine companies. They’re asking wine lovers to make donations to relief organizations for flood victims in Australia and Brazil.

This year is the sixth OTBN for the Bivona Child Advocacy Center, in Rochester, N.Y. It is the center’s signature fundraising event, says Mary E. Whittier, executive director of the facility that helps child victims of abuse. To date, OTBN has raised about $800,000, she says. “It has been an amazing thing in this community.”

Hinton’s Wine Store in Alpharetta, Ga., is celebrating its sixth OTBN. Even though attendance is free, so many people tried to reserve a spot that Hinton’s closed the waitlist after the first week of February. Chris Hinton, who was an NFL offensive lineman for 13 years and seven-time All-Pro, owns the store with his wife Mya. The reception sparkler will be Toso Brut Sparkling Wine from Argentina.

Meantime, in Argentina itself, “being wine tourists and researchers,” Michael Veseth, a professor at the University of Puget Sound, who’s also known as the Wine Economist, will be celebrating with his wife, Sue. “Instead of wines that remind us of friends we’ve known for years, we will pull corks from bottles that link us to the people we will just have met in Mendoza,” he says.

At Mac’s Creek Winery, near Lexington, Neb., the McFarlands who own the winery will be welcoming guests with reservations for the winery’s first OTBN celebration. Barry McFarland told us that for $25 each, guests will be served substantial appetizers, a glass of Mac’s Creek wine, and at the end of the evening, after sharing their OTBN wines, “they’ll leave with a bottle of Mac’s Creek wine to sit on their shelf.”

Over the past year, we have opened some spectacular wines, special bottles, including storied Bordeaux, beautifully aged Merlots from Long Island, N.Y., and an Alsace Gewürztraminer that we first had on one of our trips to Paris last year. There’s nothing quite like sudden, unexpected changes in your life to reinforce the notion that you should seize the day, every day. Still, there are always bottles we shy from opening. The one we will open is one of those.

Our own choice reflects so many of the principles of our wine writing. Over the years, we received countless letters and emails from readers who apologized for addressing us as “Dottie and John” and quickly added that it seemed appropriate because we felt like friends. We were always so flattered to read that. Jean and Harold Settle of Cropwell, Ala., did become friends.

In early 2001, we received a letter from Jean telling us she was bringing Harold to New York for his birthday to see The Producers and she wondered if we could have dinner with them. We were not able to do that, but we suggested Joe Allen, our favorite pre-theater place. After Jean confirmed their reservation, we arranged to have a bottle of wine from us waiting at their table. The show, dinner, the wine and the visit were a huge success and Jean and Dottie became pen pals and talked on the phone off and on.  When the Settles’s grandchildren were born, Jean sent pictures. Harold sent pictures of his award-winning roses. When we had a book-signing in Atlanta, they drove over and we finally met them.

Almost seven years ago, Jean wrote that she had pancreatic cancer.  The diagnosis was not a mistake, as the same diagnosis had been for Dottie in 1992. Jean had aggressive surgery and Dottie posted a picture in her office of Jean in her hospital bed, and kept track of critical medical milestones. In 2006, when we flew to Birmingham for some wine research, we met the Settles for dinner. Jean looked great in her wig. For a special birthday, we sent gelato and ice cream. She and Harold sent us two bottles of Bryant Vineyard Muscadine wine from a 25-year-old winery in Talladega, Ala. They knew we’d appreciate them because we’ve always urged readers to support local wineries.

On Sept. 20, Jean wrote that the cancer was winning and she and Dottie started exchanging farewell letters. On Dec. 20, Jean died. She was 57.

We will open one of the Bryant wines on OTBN and toast Jean. Kelly Bryant, the man who made the Autumn Blush, a blend of four red Muscadine grape varieties, and the Dixie Blush, made from a variety called Creek, sounded a little nervous about the wines because he said they should be drunk young. They are nonvintage and we can’t remember when the Settles gave them to us. It feels like we’ve had them forever, just like the Settles’s friendship.

Read an interview of Dottie on John about OTBN 11 in Dottie and John Share Their Thoughts About ‘Open That Bottle Night.’

As part of Open That Bottle Night Palate Press is offering free geo-targeted advertising space on The Palate Press Advertising Network to any businesses or organizations using OTBN as a charitable fund raiser. For more, contact advertising@palatepressads.info. 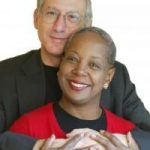 Dorothy J. “Dottie” Gaiter and John Brecher wrote the “Tastings” column in The Wall Street Journal from March, 1998, through December, 2009. Authors of Love by the Glass: Tasting Notes from a Marriage and other books about wine, Dottie and John will celebrate their thirty-second wedding anniversary this year. They originated Open That Bottle Night in September, 1999, in response to readers asking “when should I open the special bottle I’ve been saving?” The wine they shared was a bottle of André Cold Duck.