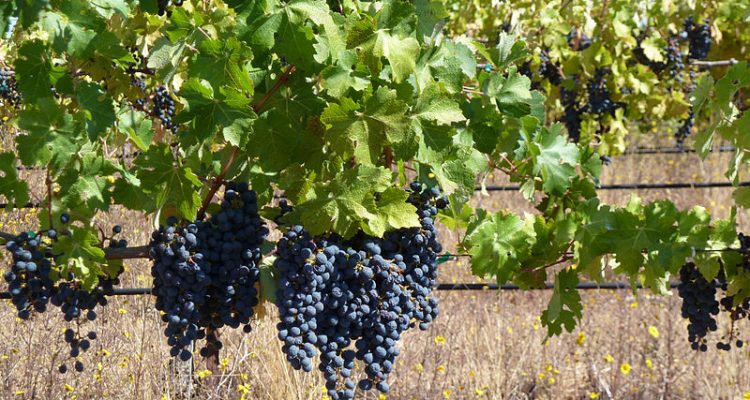 One of the main statistical canards about wine is that smaller yields equal better quality.

This is so widely believed in Europe that wine seminars become predictable. If a winemaker is on a podium talking about a wine, the first question is never about philosophy or intention, but “What was the yield?”

The theory is that when a grapevine has to concentrate its energy into fewer grapes, those individual grapes will be more concentrated and packed with flavor. So wines of lower yield should taste better.

This idea leads winemakers at high-end wineries to slice off bunches of healthy, immature grapes and leave them on the ground, cutting their potential crop in half.

Farmers of other crops would never do that. But fine wine sells for so much money that if a winery can charge more than double by making half the wine, it makes sense economically. In Napa Valley, winery owners brag about their low yields. “You got 1.5 tons an acre? Well, we got only 1.3.”

But what if they’re wrong? What if lower yield doesn’t equal better quality? What if all those grapes left on the ground would have been worth just as much as the ones that ended up in precious hand-etched bottles?

There’s a challenge to testing any relationship between quality and quantity in wine: quantity is easy to measure, but quality is not. To use critics’ ratings, you have to agree with the personal taste of the critic, and I think we all know how Palate Press readers feel about that. But if we don’t use scores, what statistical measure can we use?

Channeling my inner Adam Smith, I hit upon wine prices in the secondary market. The secondary market includes older wines that are either being sold by a retail store that has been holding onto them, or are being resold by their original purchaser.

It is imperfect, because Robert Parker’s ratings are important in secondary market prices. But it is at the very least a measure of what the market is willing to pay for a wine.

I created an index of the ten California wines most searched on Wine-Searcher. Conveniently, nine of these wines are from Napa Valley, and the tenth is a special case I will address below. 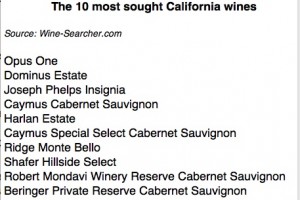 While quality will always be on the palate of the drinker, averaging the prices of the most-sought wines by people who seek wines should make the market value of these wines a meaningful measure of their perceived quality.

I used the overall Napa Cabernet harvest, amount harvested divided by acres planted, as a figure for yield. Of the 9 wines made in Napa, four are single-vineyard wines, but 5 are made from vineyards scattered around the valley, so the county-wide yield is applicable. It also should be relevant to the four single-vineyard wines because general weather conditions are very similar throughout the valley.

I plotted secondary prices versus yield over the ten years from 1997 to 2006; wines that the market has had a chance to pronounce judgment on.

What I found is that in California, there is actually a  positive relationship (R = 0.22) between yield and secondary market price: wines from higher-yield years are likely to cost more. The relationship is weak, indicated by R2 of 0.049. But it’s also the opposite of what conventional wisdom would expect. 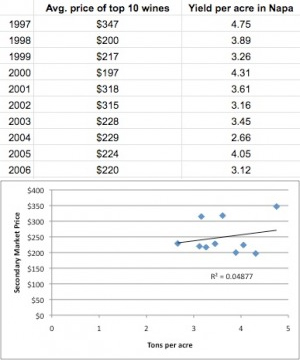 It’s worth pointing out that in high yield years, by definition, there is more wine to sell, and the law of supply and demand should drive prices down. But that isn’t happening.

Look at the lowest-yield years on the chart. The 2004s, easily the scarcest, have the same resale value as the much easier-to-find 2003s, and cost almost the same as the abundant 2005s. It’s not what you’d expect to find either by the rule of scarcity, or if lower yield equals quality.

It’s an excellent wine to investigate in depth because in an opaque industry, Ridge is unusually transparent. Ridge lists not only all the grapes that go into its wine on its labels, but also any added ingredients like calcium carbonate, water or SO2.

Ridge Monte Bello is the 7th most searched American wine on Wine Searcher. It’s consistently popular and well-regarded critically, and its yield jumps all over the place: more than 5.5 times as much was made in 1997 as in 2002. Supply and demand might make you expect the ’02 to be rarer and more expensive than the other wines, but it’s in the middle of the pack price-wise, whereas the copious amounts of 1997 Ridge Monte Bello available don’t prevent it from being the second-highest priced.

Once again, there is a weak correlation: an R of 0.1549, less strong than for the Napa wines. But once again, that correlation is positive: the more wine Ridge made from its Monte Bello vineyard in a given year, the more that wine is likely to be valued by the secondary market.

Now just think of all those valuable grapes left on the ground over the years.