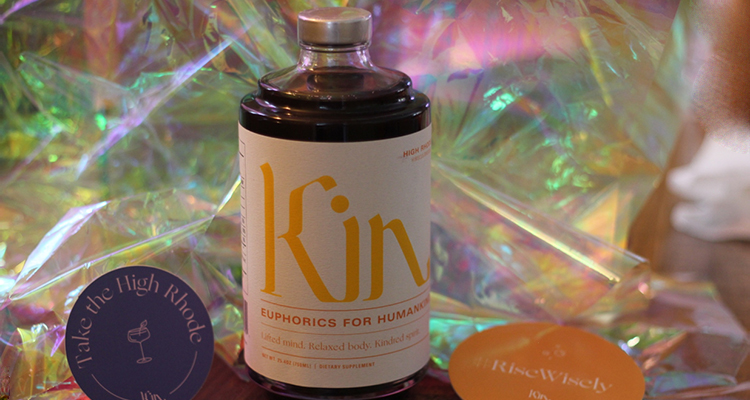 With the rise of virgin cocktails and other such concoctions among the most interesting trends of the past year or so, I jumped at the chance to sample High Rhode by Kin Euphorics, a new beverage not only contains no alcohol but also promises to produce “a buzz without the booze.”

According to the company’s promotional materials, these so-called euphorics “uplift our mood and enhance our perception so we can better connect with others.” This is fueled by — again according to Kin — ingredients called adaptogens (herbs that manage stress), nootropics (compounds that enhance cognition) and botanics (that supply nutrients). It also contains caffeine, about the same amount as in a 6oz cup of coffee.

As with any statements not approved by the FDA or backed by peer-reviewed scientific evidence, one should certainly approach Kin and its supposed benefits with a healthy degree of skepticism. (Think of it as similar to CBD products.) And to come to any true conclusion about its effects, we would need to try it in a double-blind study with a placebo, just to be sure.

I did not do that.

(In fairness to Kin, I do appreciate that their marketing is more aimed at the social benefits of enjoying High Rhode with friends and family, rather than the pseudo-scientific benefits.)

All that said, I certainly did feel something after drinking Kin. My state may very well have been, as the company likes to say, “elevated.”

I’m not sure I liked it.

On one hand, while playing a game with my son, I couldn’t help feeling “locked in,” as if I was able to focus in a way that I wasn’t able to just a few minutes before. Was it the nootropics? Or perhaps just the caffeine? I can’t say for sure, though it was pleasurable. On the other hand, I felt the beverage made me somewhat jittery and heightened my already naturally high levels of anxiety. This was certainly not enjoyable, though again could’ve been at least partially related to the caffeine. As everyone may react differently, perhaps the key point to make is that this so-called buzz, though seemingly (but not conclusively) real, did not seem to be particularly comparable to that of drinking alcohol.

As a wine lover and geek, however, it’s worth noting that I don’t choose wine for the buzz. That’s nice, of course, but for me it is more about the sensory experience, the aroma, the flavor. And put bluntly, Kin’s High Rhode does not have a particularly agreeable taste.

On its own, cooled, it’s bitter and herbal, but not in a good way… such as, for example, an over-extracted black tea. Mixed with soda water and lemon, or in a “Kin and Tonic,” it becomes palatable, but still fails to excite the taste buds. (There are more interesting recipes on the Kin website, but as I’m not the type of person who keeps ingredients like ginger syrup or Dram Palo Santo Bitters on hand, I was unable to make any of them.)

As I read other reviews of Kin that talk of hitting the clubs until 2am and waking up without a hangover, I did come to the realization that, despite my curiosity about all things drink, perhaps I am not the right audience for this particular one. For those who are, it may indeed be a revelation.

As for me, I’ll be on my couch with a glass of wine.

WHAT: Kin Euphorics High Rhode
WHERE: kineuphorics.com
HOW MUCH: $47 / 750ml (media sample)