I’ve tried it before, and it doesn’t work.

It’s around noon, I’m hungry and there’s no food in the house. But, as usual, there’s plenty of wine and at least one open bottle. Hmmm, I remember that there are many people who think wine is food, so … why not? I pour myself a half glass, knowing full well that wine on an empty stomach is one way to wreck the day. A half hour later, I’m still hungry and ready for a nap. 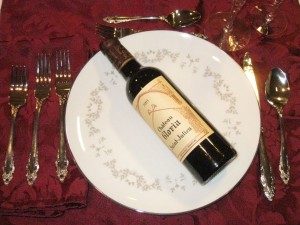 So why the persistent and pervasive belief that wine is food? For that we have to go back through history and then up to the present where, at least in New York State where I live, wine is regulated as food.

Ever since a human first discovered the serendipitous result of fermented grape juice, wine has been a companion of meals, present at religious ceremonies and an important agricultural crop.

To be fair, it does provide calories, but according to the USDA (www.nal.usda.gov) not much in the way of nutrition. One hundred grams of red table wine contain 86.49 grams of water, 0.07 grams of protein, no fat, no fiber and 0.28 grams of ash. Measurement of minerals drops down to the milligram scale as traces of calcium, iron, magnesium and calcium register from 127 mgs to 0.46 mgs.

Vitamins fare about as well. If you’re going to open a bottle to get your recommended daily allowance of vitamin C, you’re going to have to reach for the orange juice instead. Although wine is replete with acid, it contains no ascorbic acid. Those 100 grams of wine do have 5.7 milligrams of choline (vitamin B complex). But the Institute of Medicine says you need 425 to 550 milligrams of choline per da—that 85 to 110 glasses—to get its benefits, one of which is the possible prevention of heart disease.

Not surprisingly people in the wine business like to think of wine as food, but when pressed, their tune is apt to change.

Rich Olsen-Harbich, winemaker at Raphael on the North Fork of Long Island, thinks wine should be considered food, but once he started to think about it, he admitted you couldn’t live off it nutritionally. Still, he didn’t back down completely. “It’s food for the mind and the soul,” he said. Other winery owners, such as Ursula Massoud, of Paumanok, also on the North Fork, had the childhood association of wine as food, because it was always on the table when she was growing up in Germany.

But some take a more sanguine view even if their thinking runs counter to popular wisdom. “It’s better than food,” said Roman Roth, the winemaker at Wölffer Estate in The Hamptons. “You don’t have to chew,” adding, with his German decisiveness, “No, wine is not food; food is meat, it’s stuff you eat.”

Speaking of which, I could really go for some lunch right now.