Getting Ready for the Lagrézette challenge and International Malbec Days

On the left, a glass of 2007 Zuccardi Q Mendoza Malbec. On the right, a glass of 2004 Château Lagrézette Cahors—also a Malbec. The Zuccardi is fruitier, with slightly jammy overtones and good structure (though the acidity seems a little out of place), while the Cahors has an earthier, more brooding presence with more substantial, velvety tannins and great length.

What’s that duo all about?

Practice for the International Malbec Days, where I’ll be heading out on May 20. The trip will also be host to a little challenge raised by the people at Château Lagrézette, in Cahors, following a certain article (Vanity Winemaking: Cranking Cahors to Eleven) I wrote on Palate Press about the 1999 vintage of Le Pigeonnier, the Château’s top reserve cuvee. My rather negative review of this Super Cahors went like this:

‘Smells like a cedar box. Dark, dense. Blackberry, maybe? Tough tannins. Dry. Rough. Only wood, with a mentholated finish.’ And that’s it. Around the table the displeasure was unanimous. Nobody found anything good to say about it. A friend summarized it as ‘a whole tree, with a single cherry in it,’ to approving laughter.

The overall analysis of the wine was that it provided an illustration of the limitations of the Michel Rolland approach to winemaking: pushing everything to the max—low yields, extraction, new oak—resulting in rather absurd wines.

Your condemnation of our wine and the people involved is so intransigent! It looks like a settling of old scores with Lagrézette, Mr. Perrin, Mr. Rolland, and Mr. Parker…Anyway, let’s not start a polemic.

Mr. Perrin and I, invite you to come to Château Lagrézette at your earliest convenience for a blind tasting of a few different wines including Le Pigeonnier.

We would of course pay for your air plane ticket if the results of the blind tasting confirm your previous written comments about Le Pigeonnier 1999. 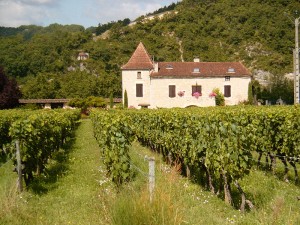 Palate Press publisher, David Honig, and I were surprised at the challenge issued by the Château and took time to discuss whether or not we should take Courtois up on his rather intriguing offer. Most other bloggers and wine folks I discussed this with were encouraging us to go ahead, while expressing some worries that Courtois and Co. would likely “stack the deck” with purposefully selected wines. I’m still unsure as to whether the Lagrézette GM was really expecting us to answer yes, and David and I are both perplexed that the offer seems to create an incentive for me to dislike the wine again.

Shortly afterwards, an opportunity presented itself: the International Malbec Days, which takes place in Cahors—birthplace of the malbec grape—from May 20 to 23. The event is welcoming a number of journalists from around the world, and agreed to include me in the group, along with Joe Roberts of 1WineDude and several other American bloggers. This allowed us to set up a precise date for the Château Lagrézette challenge and begin discussing how the tasting would take place.

Alain Dominique Perrin, Lagrézette’s owner and the CEO of Cartier, the luxury goods company, offered the following conditions (translated from French) himself:

A simple blind tasting of various malbecs, without regards to year or place of origin, this is not a trap or a contest. We are offering eight wines, to be tasted blind, with the only guarantee being that it is Malbec. You judge and evaluate, it remains confidential if you so desire.

Mr. Perrin originally was supposed to conduct the tasting himself, but his schedule unfortunately will not allow him to do so. Instead, it will take place with Courtois, Lagrézette cellar master Cédric Blanc, and another person of my choice to validate the process and taste along with me. The tasting will take place on May 20, at the Château.

Frankly, no matter what the results, I’m glad to have the opportunity. The fact that Mr Courtois issued this challenge showed that something in my piece on “Vanity winemaking” hit the heart many current debates on modern winemaking. The possibility of engaging a discussion on the whole matter is always welcome to me, and I promise to undertake the challenge with an open mind.

For the record, between the Zuccardi and the Lagrézette, it’s the Lagrézette that I preferred. Now, we’ll just have to see about the Pigeonnier.

Note from the Publisher—Palate Press has the utmost confidence in Rémy’s honor, the most important part of this curious challenge. It is “curious” because Lagrézette is not challenging him to identify the wine in a blind tasting, but to identify and dislike it. Palate Press is paying part of Rémy’s travel expenses, as any publication might in sending a reporter to an event, but Lagrézette will reimburse the cost of the ticket only if he identifies the Le Pigeonnier and does not like it. That makes it a very curious contest indeed. Perhaps the most important part of this challenge, though, is that Lagrézette even felt the need to make it and follow through in response to an online review. What this might mean for online media and wine bloggers we do not yet know, but we expect that it will be followed with fascination as the whole world of wine media continues its shift to the electronic future.

We look forward to the challenge, however it turns out, and thank the people at Lagrézette for giving Rémy and Palate Press this opportunity. We would also like to thank Paul Mabray and everybody at VinTank, and Eve Resnick and the people at International Malbec Days, for inviting Palate Press to the event. Please look forward to Rémy’s coverage as he learns about and tastes his way through the  Black Wine of Lot, Argentina’s pride, and more, as Malbec producers from around the world converge to study and compare their wines. —DBH

Rémy Charest is a Quebec City-based journalist, writer and translator. He has been writing about wine and food for over 12 years in various magazines and newspapers. He writes two wine blogs (The Wine Case, in English, and À chacun sa bouteille, in French) and, as if he didn’t have enough things to do, he recently started a food blog called The Food Case.